You agree not to post any abusive, obscene, vulgar, slanderous, hateful, threatening, *-oriented or any other material that may violate any applicable laws. Doing so may lead to you being immediately and permanently banned (and your service provider being informed). The IP address of all posts is recorded to aid in enforcing these conditions. You agree that the webmaster, administrator and moderators of this forum have the right to remove, edit, move or close any topic at any time they see fit.
Post Reply
29 posts

An interesting plan which I'd never seen before:
https://library.artstor.org/#/search/da ... =1;size=48

Appears to be a large, mostly-flat suburban lot (.75 acres, with a '4 foot slope from front to back').
Unique features include the wide "garden loggia"; the built-in dining nook with its open view through the gallery and to the garden; a very long living room (I'm counting 50 feet from the fireplace to its opposite wall); and the sunken garden with a geometry that insists its overall importance to the total design.

I saw that Dabney was a forerunner to the Zimmerman plan, including the window block designs...

Don't miss the treasure in this Artstor file.... the final image is a glorious early sketch by Wright.
Top

Thanks for finding and posting this - the Zimmerman file has no drawings, so this will have to stand in for the moment.
The "garden loggia" seems like a great feature and one I can't remember seeing before in similar work.

The plan is interesting. Typically entering a Usonian like this the entry contains two ways into the house. Here only one. The missing private hallway to the bedrooms comes directly into the living room at Dabney where the orientation of the bedroom wing is flipped. It's nice. I really like the garden loggia, but I miss the less "claustrophobic" entry room of the early Usonians. Can't have it all, I guess.

The 'general & electrical' version of the plan shows a service door into the kitchen...and also a nifty planter box that backstops the dining nook.
https://library.artstor.org/#/asset/285 ... 1234682547

The way the Dabney "garden loggia" and the kids bedrooms are arranged is reminiscent of the Griggs house.. Well, minus the soaring ceiling and trusses.. When I was at Griggs, one of the partitions between the kids' bedrooms was removed, creating a large "kids" sleeping area. I found it to be a really neat space; kinda dark and mysterious.
Top

Don't know the Grigg's house I think. What year?
Top

Couldn't Dabney be as much about Jacobs et al as about Zimmerman ? I suppose that row of fat piers is the Zimmerman connection. Then again, Schwartz has those too ?

peterm shared this comment on a Zimmerman thread in 2013:

An analysis and history of the Zimmerman house:

Nils Schweitzer did the original drawing, then modifications by Jack Howe, followed by John Geiger. The precast concrete window design was recycled from the unrealized Dabney house from 1949...

The window blocks, the piers, and the general form of the living room appear to be the Dabney-Zimmerman connection.
Top

jay wrote: ↑
Fri Sep 10, 2021 7:40 am
The window blocks, the piers, and the general form of the living room appear to be the Dabney-Zimmerman connection.

Did those old youtube links work for you? I was not able to find anything from them.
Top

Found this great piece by John Geiger on the Zimmerman house (with a couple sweet construction photos):
https://jgonwright.net/ep03Geo.html

He writes a little about the Dabney-Zimmerman connection. At the bottom of the piece was an interesting note:

Note 1: There is a further comment about the relationship between the Dabney and Zimmerman houses in another draft of this manuscript:

"The Zimmerman scheme was an adaptation of the Dabney house, which was a slightly schizophrenic concept with a combination of unequally pitched gable roofs and a flat roof with a lapped board fascia, the two being joined by a row of clerestory windows. It was an unhappy combination of forms that did not conform to Wright’s own dictum of organic; “In organic buildings nothing is complete in itself, but is only complete as the part is merged into the larger expression of the whole.” Future, p. 66). Had the flat roof been another gable and the clerestory retained, it would have been a very interesting house. Schizophrenia is difficult to cure, however, and Dabney didn’t make it. With a little more therapy it might have survived. The relationship of the dining area to the bedroom gallery would have been interesting and survived in the first Zimmerman design."

The use of the word 'schizophrenic' seems a bit hyperbolic; from the Dabney plan it appears the "garden loggia" also had a flat roof. So the blending of flat and gabled roofs occurs twice, showing some type of pattern... Are there built examples where Wright blends flat and gabled roofs like this? I'm drawing a blank on memory...

For Dabney, getting those clerestories in the south-facing front side seems important (as opposed to Zimmerman?). For the sheer volume of Dabney's living room would've been pretty dark without them. Yet with that long span of clerestories, plus the window blocks, you could imagine some beautiful plays of light in that space, especially in the winter.
Top

I'd forgotten all about John Gieger's web site. I think last time I was there nothing was posted, but not sure.
Anyway - this is great. Thank you for dropping the link.
Top

In that Geiger commentary, he says "The relationship of the dining area to the bedroom gallery would have been interesting and survived in the first Zimmerman design"...
Here's a scan of Zimmerman #1 that SDR uploaded in a different thread:

One critique of Wright that I'm unashamed to make concerns his dining areas. When his dining tables are pushed up against the masonry wall, like Bachman-Wilson or McCartney, etc, it will produce an eating experience where at least some of the diners are looking straight into a stone wall... Not cool! On the flip side, a dining experience like Dabney would give a full range of view. (I'm also pretty enamored with the Suntop Homes dining arrangement.) 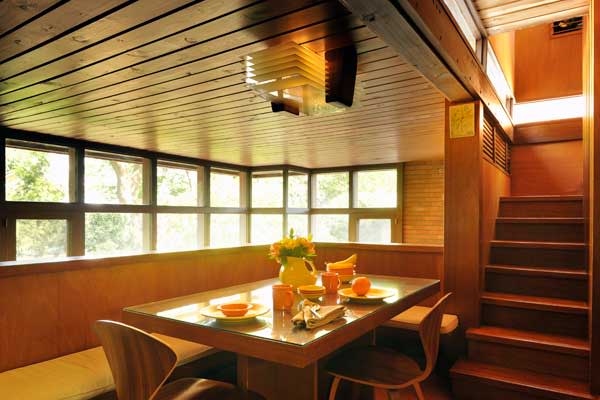 Dabney followed MM Smith by 3 years. The Dabney plan has as much to do with Smith as with Zimmerman. While the Smith House originally lacked the garden room of Dabney, one such was added in the 60s, I believe, by TAA, very likely inspired by Dabney, but wider. Like Dabney, Smith entrance goes only one way, into the living room.

Jay, there is one gable-cum-flat that I can think of off-hand: Mossberg.
Top

Off hand I would not have associated Smith with either of those two, mainly because it's flat roof would have thrown off the trail, but reviewing the plan it's apparent.
Yes - Mossberg - I couldn't think of the name but one enters the gabled living room from under a flat roofed garden loggia type of space.
Top

When the architect needed to expand a space beyond a footprint that could be housed under an appropriately sized and pitched roof, he simply extended the necessary shelter under the only conceivable alternative, a flat roof. It could be argued that the most "organic" of the houses---using Wright's own definitions ?---are those whose roofs are consistent: hipped, gabled, or flat.