You agree not to post any abusive, obscene, vulgar, slanderous, hateful, threatening, *-oriented or any other material that may violate any applicable laws. Doing so may lead to you being immediately and permanently banned (and your service provider being informed). The IP address of all posts is recorded to aid in enforcing these conditions. You agree that the webmaster, administrator and moderators of this forum have the right to remove, edit, move or close any topic at any time they see fit.
Post Reply
29 posts

I certainly agree that a more uniform roof looks better, more pleasing, more cohesive. However, if we're judging such a thing under Wright's own terminology of "organic", then I'd point out that Wright endlessly considered the interior space the "reality of the building". I think it's a rather important distinction to make, in how the experience of 'the thing' originates from an inner central point and extends outwards. ("From within outwards" another Wright quote..) Under a definition of "organic", the 'parts' of the 'whole' I'd interpret as not necessarily all being equal, but that all parts subordinate in an arranged order to its nucleus.

If the house is a circle [metaphorically], it emanates from its center point to achieve its whole. The center is the binding principle. Thus, viewing (and judging) a Wright house from its exterior presentation would be the same as looking at a circle from its outside. On the other hand, viewing (and judging) the house from its interiority would be like experiencing a circle from being within it. And I believe that from Wright's Usonian period onwards, he has clarified this distinction, insisting that the interior experience is primary.

Dismissing Dabney as a "schizophrenic concept" due to its roof scheme, while saying it doesn't fit Wright's definition of 'organic', I find to be slightly silly.... All due respect to Mr. Geiger.
Top

Interesting analogy of the house and circle. I think it works pretty well.
Others of this forum know a whole lot more about Gieger. I know nothing about him really.
Yet I was surprised also to read him use the label "schizophrenic" applying it to Dabney.
Yet his comment does make one think further about the work. I appreciate that.
Geiger says Wright should have made the flat roof over the workspace at Dabney some form of Gable.
I agree and that is what Wright did with Zimmerman. (Second guessing Wright however, one is always on thin ice - possibly at Dabney he was minimizing costs with the flat roof over workspace - who knows)

But to the issue of the gable/flat roof combination - a typical architect would not have done that being scared of the schizophrenia. Wright does it and the result is synthetic with the rest of the building.

Yeah, and to defend Geiger, the "schizophrenic" comment was omitted from his narrative, included as a supplemental note from whoever posted the writing.

I might add that if the Mossberg mixing of flat and gable roof is acceptable, Dabney goes a step further with a row of clerestories dividing the flat and gable roofs. Looking at the perspective, I admit to really liking the look of it. Maybe that's due to its novelty, I don't know.
https://library.artstor.org/#/asset/285 ... 1370054584

I'd sure love to see a 3D rendering of this design..!
Top

Well, in the meantime, I was thinking ... it just may be that what sets Zimmerman apart and makes it unique in Wright's work, or strikes one seemingly intuitively in that way is precisely because it contains so little of those apparent "contradictions" that Geiger may have termed schizophrenic.
Despite the "aspect of principle" in Wright's work, "purity" is not a word that really applies.
the work is too shot through with invention for that.
Yet at Zimmerman you can be fooled, that this is really just a nice gabled roof, conventionally consistent, purely neighborly house.

The perspective you show of Dabney above is case in point. Nothing obvious like that going on at Zimmerman.
Last edited by Tom on Sat Sep 11, 2021 3:58 pm, edited 1 time in total.
Top

If Wright centered his designs interiorly, with schemes that used expanding ceiling heights for effect, his dilemma was how to achieve that under one uniform roof. There are plenty of examples where a Usonian's roof seems to shift relative to the interior needs, with an acceptance of an exterior 'messiness', at least in my opinion. A couple examples: 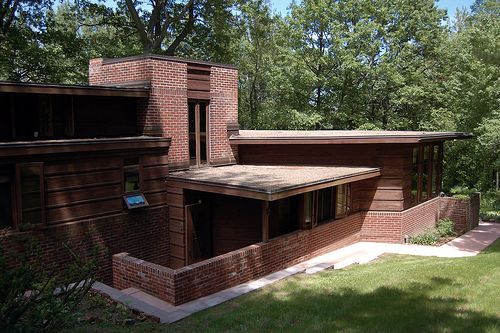 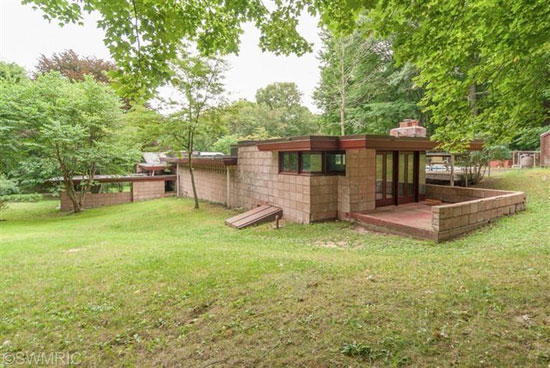 One way Wright achieves a more uniform roof while having a bunch of different ceiling heights is in the custom hipped roof, for example the Palmer house or Reisley house:

In the instances where Wright achieves his interior criteria with a uniform and simple roof, I agree those are the most satisfying. Zimmerman is pretty good. My personal favorites are the Brandes house, with its simple bump up of clerestories from the core. And also the Sweeton house. 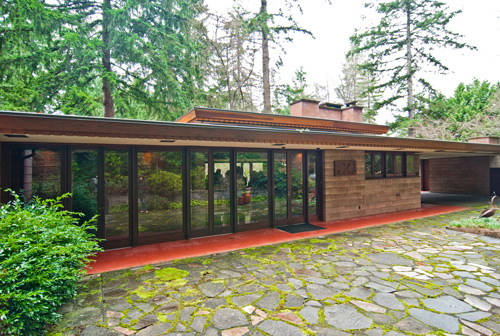 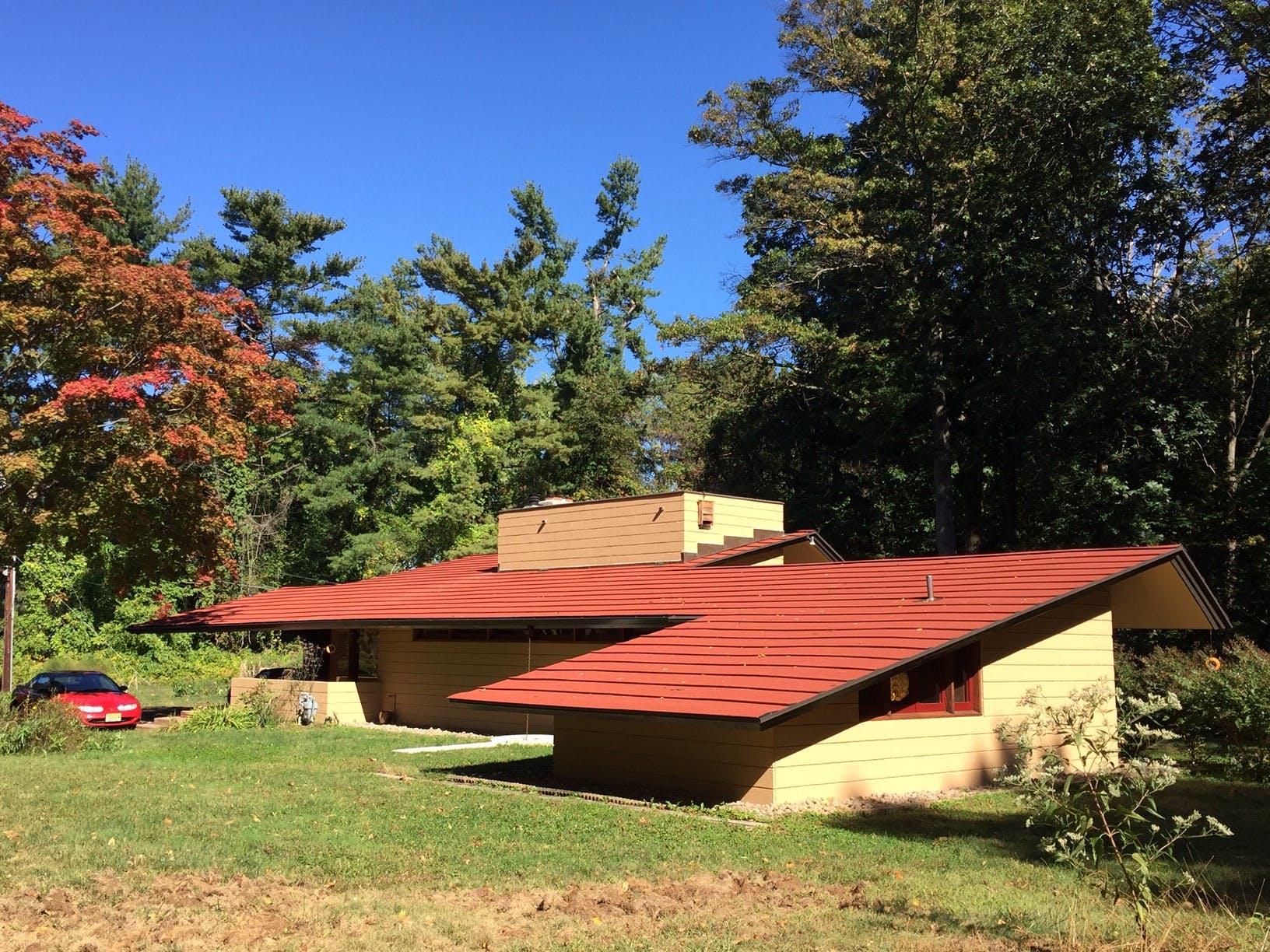 I wonder if one would find a single flat-top Usonian with only one roof plane; the great majority are bi- or tri-level roofed. In any event, a masonry core rising to or above the top-most roof, containing the principal chimney and, often, the kitchen space, is the norm.

Sweeton has no clerestory roof (or "lantern," per Wright); its masonry core is evident in the photo.

I was in the office of an architect with connections to FLWBC (I won't say who). He showed me, with pride, the project he was working on, a rambling collection of parts roofed in flat, shed, gable, hip. I said, "All it needs now is a mansard." Quiet settled over the studio.

John Geiger and I had many long talks about FLW and how he worked. John had a remarkable understanding of the methods FLW used. His point, with which I heartily agree, is that the "from the inside out" claim by Himself is exaggerated, as much for PR as a serious foundation for his approach to design. His exterior expression of a building was as important as the interior, and both evolved together. If he had a fine interior space that manifested itself in an awkward way outside, he would change whatever needed to be changed. That FLW ended up with an occasional schizophrenic result wasn't a bother to him at all, and shouldn't bother any architect. That's why early projects go by the boards to make way for the refined finished product.

I haven't looked into Geiger's archive extensively, but there should be an evaluation of the Oak Park Home in there. John gives less weight to the arrangement of interior spaces than to the plan of the roof, especially pre-playroom. Again, I think he got it. Room arrangement evolved dramatically from 1889, but the refined roof of that old house is as precise as anything he did later.
Top

We can all agree that Wright played the PR game to a degree... And we agree he cared deeply about his exteriors... No question... But to disregard the architect's oft-repeated design philosophy as exaggerated and "PR" is, I think, a pretty lousy study of his work.

"As Phil Allsop and Richard Armstrong explain .... for Wright, "exterior form was an integral expression of the spaces within a building," or put more succinctly, he "designed his buildings from within outward."
[The authors discussing their book Frank Lloyd Wright: From Within Outward]

Oh look, some PR inside of Taliesin West!

I continue to believe that too much is made of what artists write about their work; writing (and speaking) are what you do when you're not engaged (for whatever reason) in the work itself. As Mr Wright committed more words to paper (or to the microphone) that most of his contemporaries did---taken together---I think we could expect more hot air there than from any of the others, in toto.

The problem with philosophies of design is that they are often proposed as an answer to a question that hasn't necessarily been asked. Laymen and professionals alike are naturally curious about where an artist's work "comes from." Was it divine inspiration or was he influenced by others' work ? Few seem content simply to take the work as a given---a unique creator's unique creations. And laymen, those without a native affinity for methods, motivations, and sources of design (often mechanical and/or mundane in nature) are prone to seeking and accepting exotic explanations for design decisions---in the absence of the elusive and often non-existent Answers (capitalized) in their search for Understanding (ditto). Unfortunately, the bored, restless, unoccupied artist seems all too eager to accommodate these seekers by filling their heads with lofty verbiage of their own devising. "How unique am I !" says the artist to his audience.

I believe Mr Wright may have been guilty of this practice, uncaring about the mischief it would make for professional and amateur alike, down through the years . . .

Repetition doesn't qualify or disqualify a point of view. FLW also used the word 'organic' to describe his late work, even though he stated (to John Geiger) that he was tired of the word, and wished he had adopted the term 'bionic' instead. To say that 'within/outward' is overstated and far from fully describing FLW's approach does not deny that he regarded it as valid, but it was more complicated than that. The statement, practically a motto, is brief and concise, which tells a lot in a few words. He was adept at getting ideas across with simple sentences. Lao Tzu was also good at that. His dictum is precise and to the point, but try to parse his words and figure out exactly what it all means. A riddle wrapped in a mystery inside an enigma.
Top

But we're getting off topic of the Dabney house, so I won't carry it on.
Top

While we're waiting for fresh news and views on Dabney, take a gander at the first and last examples in Jay's four-photo series above. What a difference a dozen years made; was there anything like Sweeton (in one of my favorite views of the house) in Wright's head, in 1938 ?