You agree not to post any abusive, obscene, vulgar, slanderous, hateful, threatening, *-oriented or any other material that may violate any applicable laws. Doing so may lead to you being immediately and permanently banned (and your service provider being informed). The IP address of all posts is recorded to aid in enforcing these conditions. You agree that the webmaster, administrator and moderators of this forum have the right to remove, edit, move or close any topic at any time they see fit.
Post Reply
96 posts

Yes---and, on pages 156 and 157, in describing the night spent putting Unity Temple on paper, we have this:

"We do not choose the style. No. Style is what is coming now and it will be what we are
in all this. A thrilling moment in any architect's experience. He is about to see the counte-
nance of something he is invoking with intense concentration. Out of this inner sense of
order and love of the beauty of life something is to be born---maybe to live long as a message
of hope and be a joy or a curse to his kind. His message, he feels. None the less will it be
"theirs," and rather more. And it is out of love and understanding that any building is born
to bless or curse those it is built to serve. Bless them if they will see, understand and aid.
Curse them as it will be cursed by them if either they or the architect fail to understand each
other. This is the faith and the fear in the architect as he makes ready---to draw his design.

In all artists it is somewhat the same fear and the same faith.


NOW regard this white sheet of paper ! It is ready for the recording of the logic of the
plan.

[and yes, he spaces his punctuation thus]

"Boy ! Go tell Black Kelly to make a blaze there in the work-room fireplace ! And ask Brown
Sadie if it's too late to have Baked Bermudas for supper ! Then go ask your Mother---I shall
hear her in here---to play something---Bach preferred, or Beethoven if she prefers."

I'm almost finished with Plagued By Fire and I've enjoyed it. I'm finished with the text proper, and am proceeding thru the epilogues & appendices to see if there's anything of additional interest.

On page 531 the author is discussing his source materials. As part of that, it sounds like he may be familiar with Wright Chat .... I wonder what Hedrickson means by "... a trip through the looking glass." 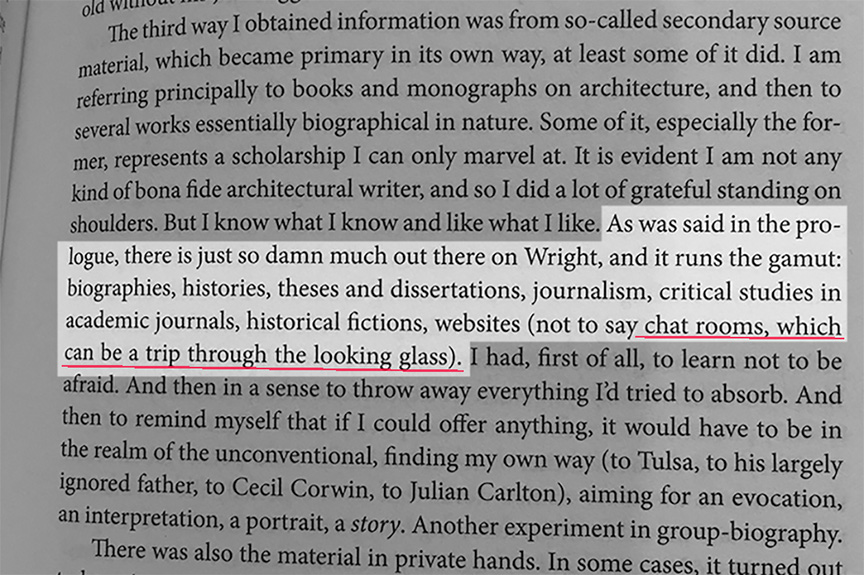 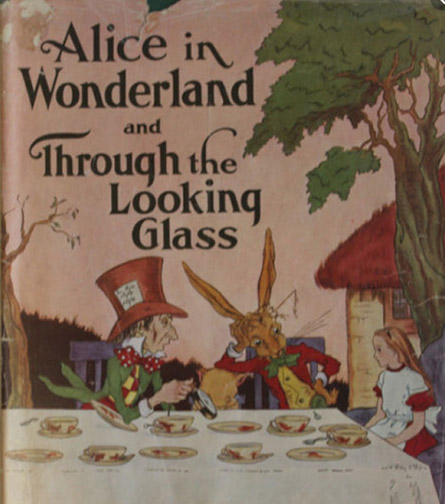 "I don't know much about X, but I know what I like (and like what I know)" rarely inspires my confidence---in a writer of non-fiction . . .

Plagued by Fire....
I thought it a long, but very worthwhile read. It is not by any means an architecture book, or a book written for architects or architectural enthusiasts. It has few photos...only small B/W photos, most of people; no plans or drawings. This is a book about a very famous and complicated person who was an architect, not his work, though a few selected works are described by the author in terms and in a manner that an architect or architectural scholar likely would not.

The author is clear that much has been written about Wright, and why should he think he has anything to add to the pile? His answer is that he brings the perspective of a journalist to the task, and that it his intention to cut through the myths often created by Wright and accepted without question by many, and tell what was. Brendan Gill's book is both lauded as the first long form book to attempt this, but the author is quick to note Gill's factual errors (not item by item) and his lax documentation. Plagued has a long bibliography and a chapter long narrative of notes about sources, quotes, and clarifications. It is clear words and facts matter and words are chosen carefully to express if something is fact, conjecture, or opinion. What this book does differently is to tell Wright's story not as a linear bio, but rather a telling of Wright's story in a series of nodes within his life.

The nodes typically go into extreme detail and backstories of people who were significant players in Wright's life, and from those studies, it is illustrated how Wright impacted those around him and vice versa. The backstories flesh out names we enthusiasts know of but know little about, and through knowing them, we get a more complete picture of Wright. The author in places draws conclusions and makes some extrapolations (that are clearly noted as such) with which I either agreed or disagreed and moved on.

The book is seen by some as another hatchet job of Wright, a'la Brendan Gill, but I disagree. This book is well written, well documented, but not a sycophantic portrayal, as some might want. This is a warts and all story of the man, but not unfairly so.
Top