You agree not to post any abusive, obscene, vulgar, slanderous, hateful, threatening, *-oriented or any other material that may violate any applicable laws. Doing so may lead to you being immediately and permanently banned (and your service provider being informed). The IP address of all posts is recorded to aid in enforcing these conditions. You agree that the webmaster, administrator and moderators of this forum have the right to remove, edit, move or close any topic at any time they see fit.
Post Reply
16 posts

Could not find a dedicated thread on Midway.
Avery File:
https://library.artstor.org/#/search/ar ... e=1;sort=1

The recent talk over Wright's sculptures led me to look further into things. So I went to chapter 6 in Alofsin's The Lost Years. The chapter is titled: "A Lesson in Figural Sculpture: Conventionalizing the Flesh". Midway had an entire and elaborate sculptural program. The figures cannot be dismissed as incidental to the building. According to Alofsin Wright was integrating the figures into the work with some degree of theoretical underpinning that has to do with a desire to integrate the human figure into geometry: "conventionalizing the flesh" (Wright's own words). Why he wanted to do that is one of my questions? There are at least 17 drawings in the Avery File of the sculptures.

But first some preliminaries. Two stories that Alofsin tells in the chapter are interesting and one I have a question about. First, another amazing fast drawing story. According to son John, Wright appears in the office sits down at the desk and in one hour draws plans, sections, and elevations of the entire complex.

Second, and this is corroborated in son John's book on his father - evidently there was an "architect's box", as John calls it. Alofsin:

".... At Midway Gardens, Wright privately acknowledged this exalted role of the architect by providing an outside viewing box. Perhaps it was just another place to sit for visitors, but for Wright it was the place from which the architect - master of form and poet-priest of a new society- could view the events transpiring in the summer garden. "

Anybody know where the "architect's box" was located?

Paul Kruty's book on the building may offer a clue.
Top

Looked up Kruty's book and it's not in the budget for now. Out of print, it seems, and selling for $160.
So looked for a way to contact him online but I guess he no longer teaches at Urbana Champaign - he was not listed in the faculty.
Anybody have contact info on him?
Top

Prof. Paul Kruty has retired from the University of Illinois. So far as I know, he still uses his academic email address:

<pkruty@illinois.edu> I'm sure he would be happy to answer questions about the Midway Gardens.
Top

Thanks for your note. The "Architect's Box" was located on the right side of the interior garden facing the bandshell, on the second level of the covered walkway. It was just to the left of the tall pylon. Wright seemed to suggest this one area, although there is an identical mirror image of it on the left side facing the bandshell. I have attached three photos to show you: one of the whole garden, where it is on the far right, center; a second where you see it diagonally from the balcony of the private club, again on the far right side; and the third looking up at it from the stage. It is the projection below/next to the pylon, defined by the concrete tiles with the diagonal pattern. 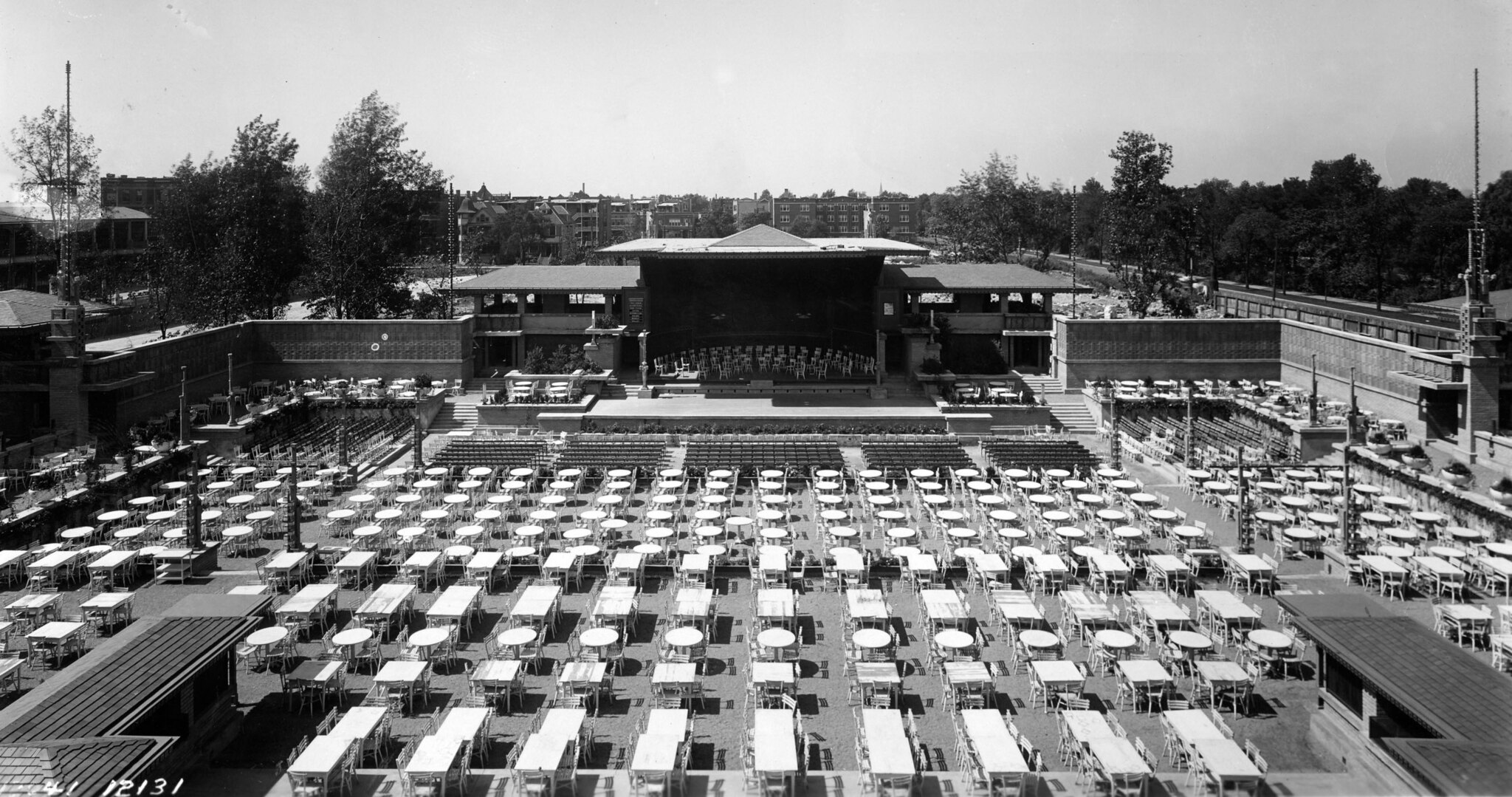 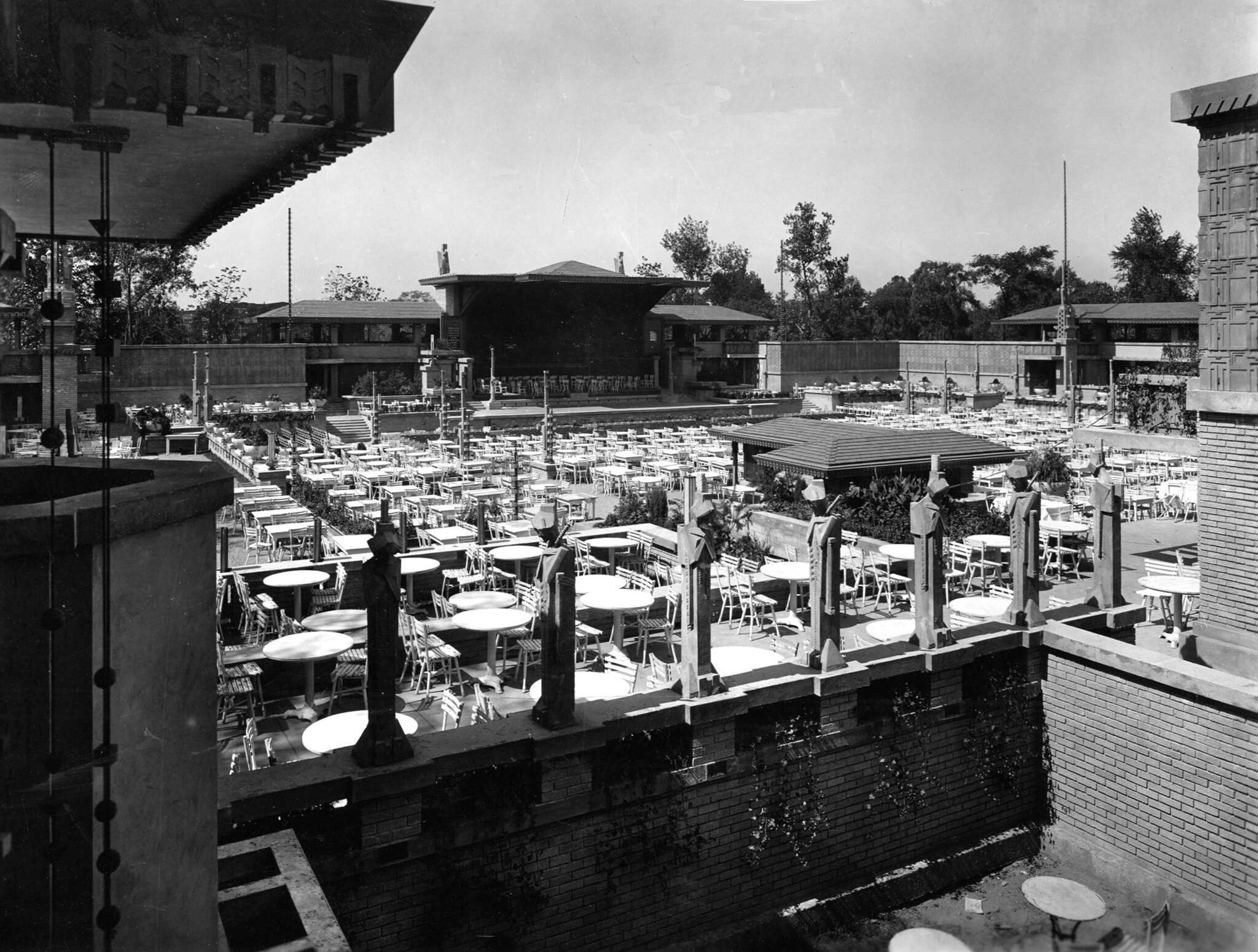 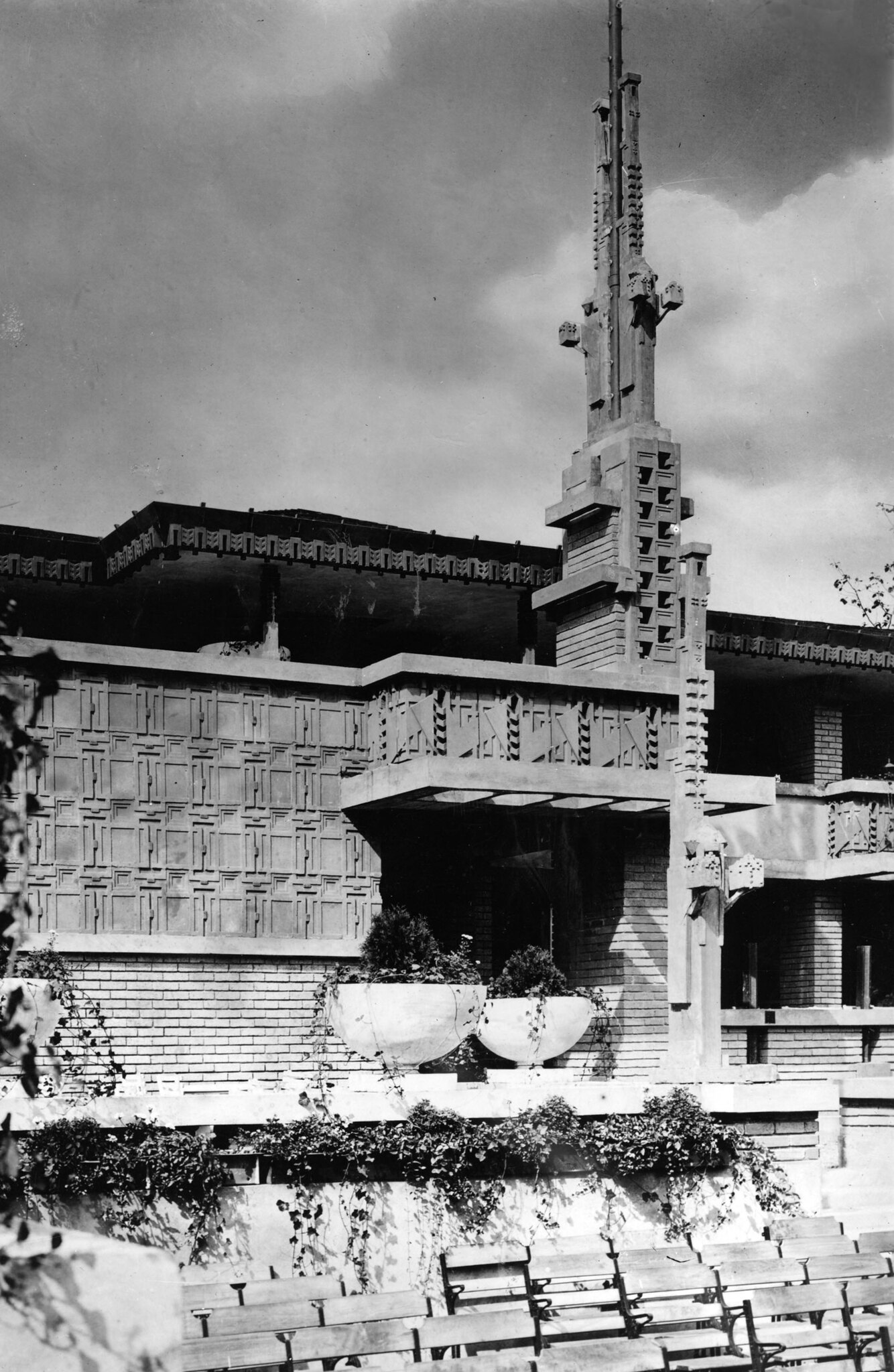 Wow. Thank you, Professor Kruty ! Your images, along with one linked just above by Tom, bring the piece into focus. The architect apparently feels deserving of a personal spire, an aspirational symbol and/or totem ?

Gee, there are some treasures in this file:

Well, there are 217 Midway drawings in this file:

. . .so I don't know how long it might be before someone locates a plan of the architect's box. Happy hunting . . .?

Here is the paragraph from chapter six of The Lost Years where Alofsin mentions the Architect's Box. It raises a ton of issues:

"Not only can the figure of the Winged Sprite be seen as the representation of architecture but also as the symbol of the architect, the bringer of geometry. And Midway, as Wright described it, became a place of the architect's mastery: "Here in Midway Gardens painting and sculpture were to be bidden again to their original offices in architecture, where they belonged. The architect, himself, was here again master of them altogether, making no secret of it whatsoever" This symbolic purpose. recalled the role of the American architect as creator and poet for his country. At Midway Gardens, Wright privately acknowledged this exalted role of the architect by providing a special outside viewing box. Perhaps it was just another place to sit for visitors, but for Wright it was the place from which the architect - the master of form and poet-priest of a new society - could view the events transpiring in the summer garden."
Top

I guess I should also include the footnote to this paragraph where Alofsin includes an excerpt from John Wright. Something about all of this (and the above) seems embarrassing to me but it is nevertheless a part of the record:

"Commenting on a visit to the Gardens with his father, John Lloyd Wright wrote: Later Dad and I sat alone in the Architect's Box, a finial at the corner - a needle of light ran up the sky. This romantic building, like the expression he bore, was the mask of a great inner love" (JLW, My Father, 72-73)
Top

The loss of this masterpiece, which is as close to perfection end to end, as anything FLW designed, is more tragic than the loss of either Larkin or Imperial.
Top

There's a picture here https://hubski.com/pub/446162 of the stacked cube lights also visible in the above photo, among the throng below . . .