You agree not to post any abusive, obscene, vulgar, slanderous, hateful, threatening, *-oriented or any other material that may violate any applicable laws. Doing so may lead to you being immediately and permanently banned (and your service provider being informed). The IP address of all posts is recorded to aid in enforcing these conditions. You agree that the webmaster, administrator and moderators of this forum have the right to remove, edit, move or close any topic at any time they see fit.
Post Reply
52 posts

Does this mean all the windows have been restored? I though that it was going to take longer to reproduce all of the art glass as it was so complex and expensive.
Top

Thanks SDR, very interesting. It appears there is still some furniture and many windows missing, but I get that these things are expensive and take time.

The Martin House website says that the 394 windows were the "single largest collection of Wright's career". I disagree. Surely the Imperial Hotel had more? Granted, the IH's windows were not terribly elaborate, but I'm 99.9% sure Midway Gardens had more than 394 windows and some of those patterns were extremely complex.
Top

Perhaps they mean individual window designs? I'm wondering if in both the Imperial Hotel and Midway Gardens (while larger and thus having more windows), Wright may have used the same design on multiple windows? Experts?
ch
Top

Midway: There is not enough photographic evidence to determine the variety of art glass designs.

Imperial: Most of the windows and glass doors are mullioned, some with a narrow horizontal strip of a simple band of square glass pieces, 2 or 3 units high, cutting across near the top. I would hesitate to include the hotel in any list of buildings that include art glass; it's just not extensive enough.
Top

I don't really see a correlation between the number of windows one can expect to find in a commercial building versus residential work... although 400 windows in just about any house would usually best both. Martin had I believe 16 unique designs (first floor different than second, one for conservatory, garage, Barton, etc, and the number of lay-lights alone must be a record). Martin having the most windows in number alone should not be a surprise, but wouldn't only Dana possibly come close? Little 2?
Top

How long until the landscaping reaches maturity rewarding a visit?
Last edited by Tom on Sat Jul 27, 2019 2:00 pm, edited 2 times in total.
Top

Knowing nothing about plants myself IÃ¢â‚¬â„¢d say 5 years.
Top

I'll wait for the day the Martin House landscaping looks like this again!

I doubt they'd let the vines grow up the brick and on the roof though. I think its always a rewarding visit at the Martin Complex. Wonderful people and always something new to see. If I get the chance, I'd like to visit again before fall. 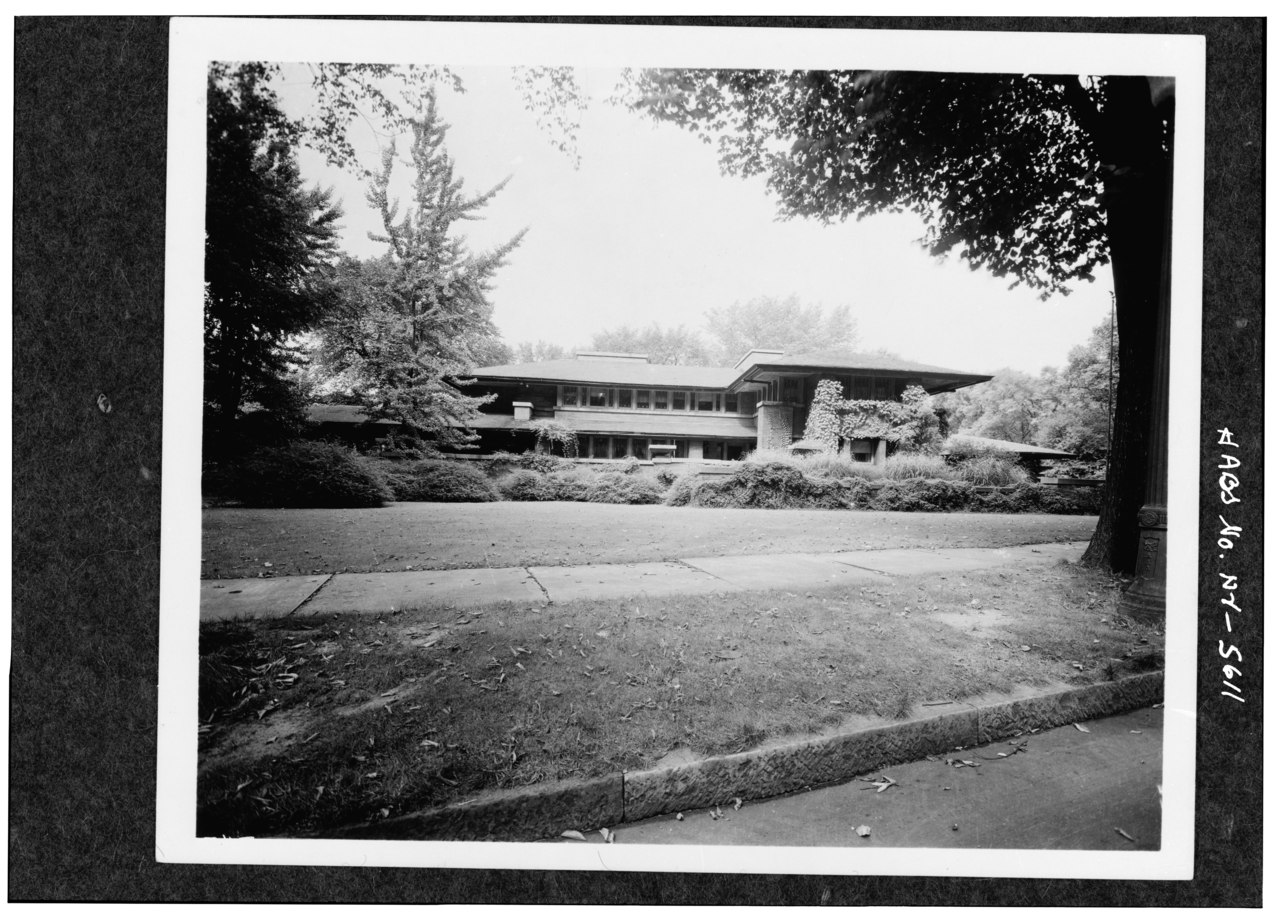 There's the upstairs window bank in its expanded condition, before restoration ? Lovely photo, in any event.

An excellent question, and one I've not seen addressed; one wonders what the landscapers among us would say. That is, how far should opportunistic
greenery be allowed to take over a building exterior---and what are the remedies, if any, short of complete removal ? Do gardeners prune climbing ivy ?

I had no idea there was an upstairs addition. Do you have any more info on that? Wikipedia says that image is circa 1904.

As far as the landscaping goes, I'm no landscape professional. But at home, I like to let the plants do as they wish, with a little help of course. I call it "English Gardening."
Top

FOCUS ON PHASE IV
Phase IV (2007) includes restoration of various masonry elements on the exterior envelope of the Martin House itself, as well as reversal of changes to
exterior walls made by the Martins in 1920. Most notably, the second floor south elevation wall was moved back to its location of 1907, and the trunk room
added by filling-in a cantilevered corner on the northwest of the house was removed. This phase also included completion of masonry, tile and other elements
on the Martin House veranda.

I've read that Mrs Martin thought the front bedrooms were too dark, so ordered the windows moved nearer the eaves of the roof overhead.

Perhaps another reader will have more authoritative plans of this modification ...

Wikipedia gave the wrong date to the photo above; this should have been immediately obvious to us, as in 1904 the house was brand new and thus
couldn't have years' worth of beard on its face ... !

The bedroom windows, facing the camera, have already been moved forward in that photo. The tell is that the wall to the left of the window band steps
back from the plane of fenestration. Compare to the colored plan I linked above, where the wall and windows make a single plane from end to end.

Of interest would be the means by which the brick wall below the windows was supported in its new and unplanned-for location.

Here's the original condition, in a photo published in Manson, "FLLW to 1910."