You agree not to post any abusive, obscene, vulgar, slanderous, hateful, threatening, *-oriented or any other material that may violate any applicable laws. Doing so may lead to you being immediately and permanently banned (and your service provider being informed). The IP address of all posts is recorded to aid in enforcing these conditions. You agree that the webmaster, administrator and moderators of this forum have the right to remove, edit, move or close any topic at any time they see fit.
Post Reply
129 posts

I've got a question about a drawing number. All drawings that came out of Wright's office have numbers given to them by Bruce Brooks Pfeiffer. For example, one of the earliest drawings of Taliesin (in Wisconsin where I work) was given the number 1104.001. "1104" denotes Taliesin I. The "11" being for the year 1911 & the number after that to track it; there are 14 additional drawings for Taliesin all starting with the number (those are designated as Taliesin I drawings). All drawings done of Taliesin after the first fire are given the appellation "1403" & all drawings done of Taliesin after the second fire are given the appellation "2501". My problem is that I'm currently trying to find the archival number for the floor plan of Taliesin that was in the January 1938 issue of Architectural Forum devoted to Wright.

Working at Taliesin, we have lots of electronic copies (& photocopies & photographs) of drawings of the building (and the school, Hillside, and Midway Barn, etc.), & all of them have archival numbers given to them by The Frank Lloyd Wright Foundation Archives. But I have not found a number for the Architectural Forum drawing. Even the drawing done for In the Nature of Materials has an archival number from The Frank Lloyd Wright Foundation Archives: 2501.065.

So, yesterday I wrote to the folks at the Avery looking for the drawing number. So far they've not been able to help. After Christmas I think I'll just send an e-mail to the folks at Taliesin West to get the answer. But if any of the folks here now, I'd appreciate it.
"The building as architecture is born out of the heart of man, permanent consort to the ground, comrade to the trees, true reflection of man in the realm of his own spirit." FLLW, "Two Lectures in Architecture: in the Realm of Ideas".
Top

Is the Forum item a plan of Taliesin III ? Do you have the relevant Monograph ? The plates in the Monos are all given T numbers . . .

The '38 Forum plan is T-III. Look at the plans available which differ from Forum. For instance, the Forum plan shows the carport intact, the main entrance still leading directly to the living room, no access to the lower level from the loggia, downstairs located between the columns, no doors from the studio to the garden. That might narrow the search significantly if all those alterations are listed.
Top

Here are Taliesin III plans as found in Monograph 5 (black and white of photostat ?) and Taschen II (color).

I assume that, as time went on in Pfeiffer's cataloging, it was decided to add a digit to the numbering system, explaining the two-digit image number in the earlier (Monograph) entry . . .

Of the two plan drawings shown above, the first is clearly a modification of the second, untouched copy. Numerous areas of the plan have been messed with -- erased (?) and sketched over. If those are in fact erasures, then the original pencil drawing has been used, or a sepia print has been modified using solvent (which procedure I have only just now recalled).

I'm not sure what to make of the diagonal hatching seen in the modified areas as well as (more strongly) in the untouched spaces on the right.

Any other candidate drawings out there for Spring Green's perusal ?

So, both of these sheets are versions of a later drawing than the one published in the Forum, as identified by the changes you enumerated ?

It would be interesting to know when the numbering of drawings began -- surely late in Wright's life, if not after ? Didn't we read recently that Jack Howe found the files to be scattered and scrambled, when he came to Taliesin, and that he had flat files built to accommodate them ?

Comparing the two drawings here, it can be seen that every line, every title is identical. This suggests to me that they are both prints from a single original, the second made from the modified original sheet or on a selectively erased print of it. Surely the drafter of a tracing would not think it necessary to duplicate the lettering -- even the foliage -- on the original, so precisely ?

Jack Howe and Johnny Hill began the organization of the archive in the late 40s, handing the job over to BBP after he arrived in 1949, according to Geiger.

I think the Forum drawing was done for the magazine, the "black" drawing is a tracing over Forum, alterations to T-III were sketched on the black drawing and drawn over Forum, so, in effect, Forum no longer exists.
Top

Here's an elementary question -- where specifically were the archives kept and when ?
Was the material divided between WI and AZ ? Did they cart their drawings between places when the seasons changed and they decamped?
Which buildings/rooms did they use?
Top

The archive was originally kept in the WI studio vault as well as an attic space above the loggia. Once T-West was built, the archive was moved to AZ for the drier climate. I don't know if there are any major parts of the archive that remained in WI, but I doubt it, especially once the effort began to organize it all. There is a vault in the Studio at T-West, which obviously is inadequate to contain the entire collection, but some of it. Where the rest was kept, I don't know.
Top

The traveling question is a good one, as well. I suppose current work was carried with the twice-yearly caravan; reference to prior projects drawn in Arizona but needed during the summer, for instance, would present problems.

Having two offices in those days would've been logistically challenging regarding drawings. Documents for "Active" jobs -- those currently being designed, detailed, or under construction -- would clearly need to be taken back and forth. I imagine that occasionally, however, a need would arise to refer to a past inactive project if a client had a question or needed some new thing designed or revised, etc. Also, it is often useful to refer back to a previous project detail that might be relevant to a new design challenge. In those old pencil-on-paper days there were probably lots of semi-standard details that could be all or partially traced as a head start & time saver. An exchange like this might've been a common occurrence:
"Are the such & such drawings here?"
"No, they're back in Wisconsin."
"Well, !*$&U^%!!"

It's curious to hear that part of the archive was kept in an attic space above the loggia. When I was in that loggia a docent directed our attention up into a louver in the ceiling which contained a light bulb illuminating the attic space so that we could see the portion of the framing that was charred from one of the fires -- here's my snapshot looking up thru the louver into the attic: 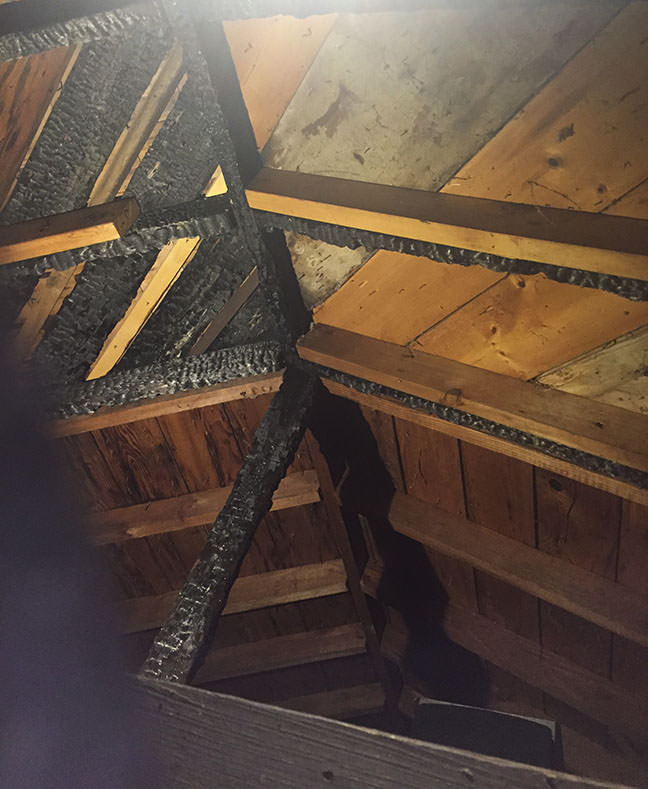 I would've thought that, starting in 1932, the bulk of the drawings in Wisconsin would've been kept at Hillside near or in the Drafting Room where they were produced or used. The only floor plan of the Hillside drafting room that I can find is the one from the master plan which envisioned many additional buildings (not realized). In the vicinity of the drafting room that was built I don't really see a room that appears ample enough for much storage. 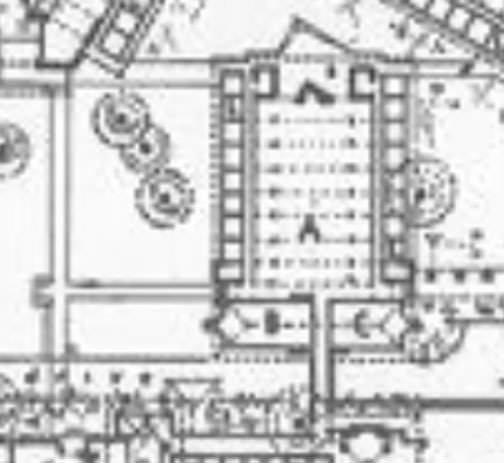 Similarly, when I look at a floor plan of TWest, I only see a small storage closet adjacent to the drafting room. I wouldn't think it was big enough to contain the 70 years worth of documents and other ephemera. I've not yet been there so I am writing in ignorance here, but it looks like there is much more storage space in the vicinity of the Library. What goes on there? 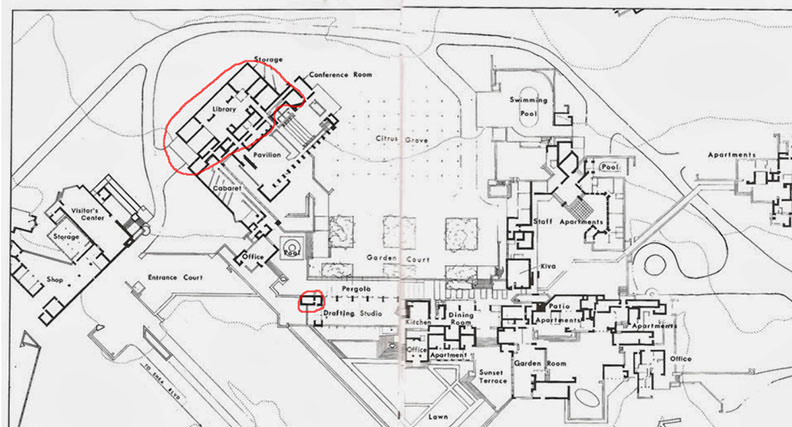 John Eifler told us that Mr Wright "expected a lot from a 2x4" (or words to that effect). Here we see him saving ones that are charred, to serve as a template for new construction ? Heh-heh -- what did he expect from a 2x4 that's half gone ?

Yes, I was thinking the same thing: what to do when the desired files are five states away ? Would they have kept the diazo machine busy making copies of everything ? I somehow doubt it.

A nondescript archives building, designed by TAA, was built south of the main parking lot at TWest in the Ã¢â‚¬Ëœ60s or Ã¢â‚¬Ëœ70Ã¢â‚¬â„¢s.
Top

Arguably, the most important 2x4 in that photo is the the one posting vertically to support the ridge beam, yet it seems to be the one most severely barbecued.

In the snapshot there is a funky piece of wood to the right of the ridge piece. It looks like it has some decorative notches cut out of it - a scrap of wood from some other place?
Top
Post Reply
129 posts