You agree not to post any abusive, obscene, vulgar, slanderous, hateful, threatening, *-oriented or any other material that may violate any applicable laws. Doing so may lead to you being immediately and permanently banned (and your service provider being informed). The IP address of all posts is recorded to aid in enforcing these conditions. You agree that the webmaster, administrator and moderators of this forum have the right to remove, edit, move or close any topic at any time they see fit.
Post Reply
45 posts

Yes. The columns in the background of the last photo are comprised of C-shaped blocks.
Top

Robert L Sweeney considers it so; his coverage of the house, in his "Wright in Hollywood," may be the most complete publication of its form and structure.

I guess Wright's "dowels" -- 1/4" steel rod -- must be set into the foundation pour, precisely located and at full wall height, standing upright like a fence or forest of reeds, while the wall is constructed around them, one course at a time . . .

Years ago I did a drive-by of Westhope and didn't even notice any ornamental/decorative textile blocks. In most photos in books and on the internet the camera is far enough away so the dominant graphic force is the striations of the solid/void window cadence.
But, decorative blocks are there. Sadly, they are largely encapsulated and defeated by latter day metal roof coping: 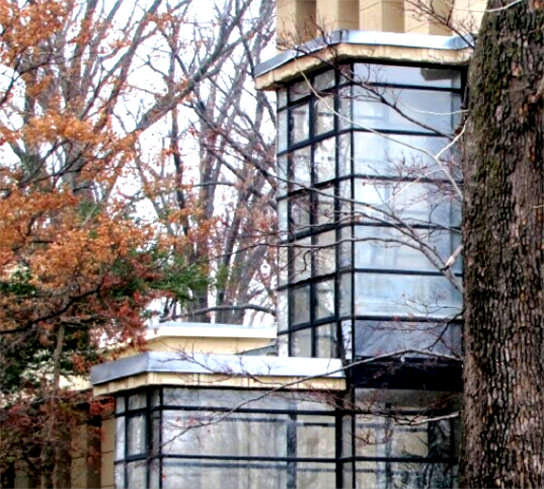 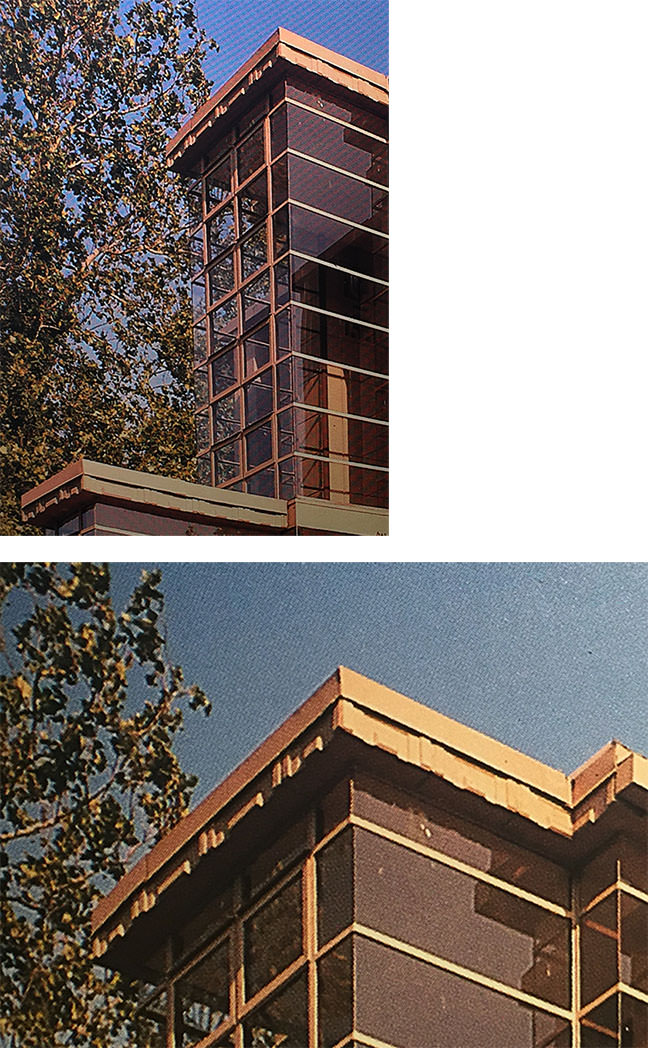 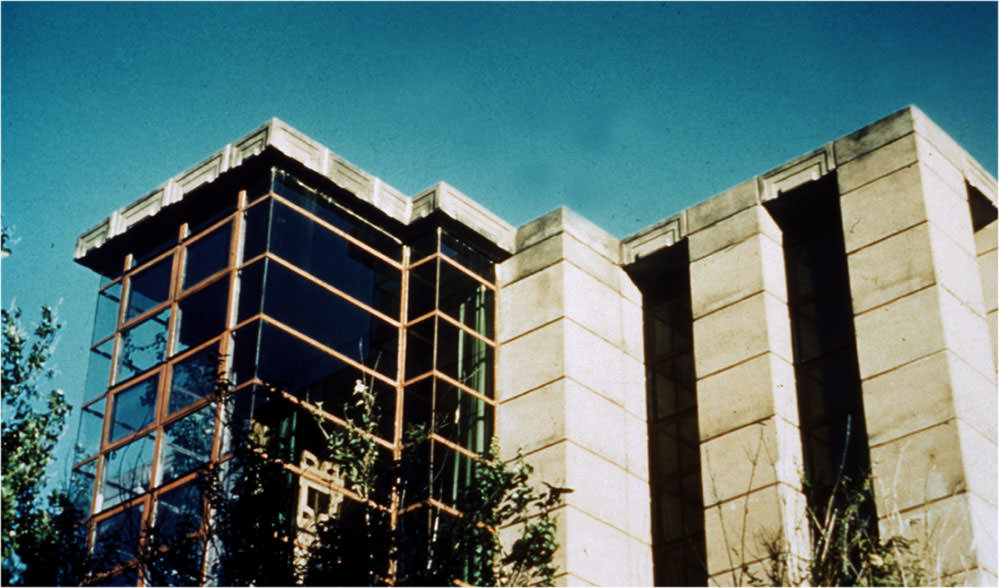 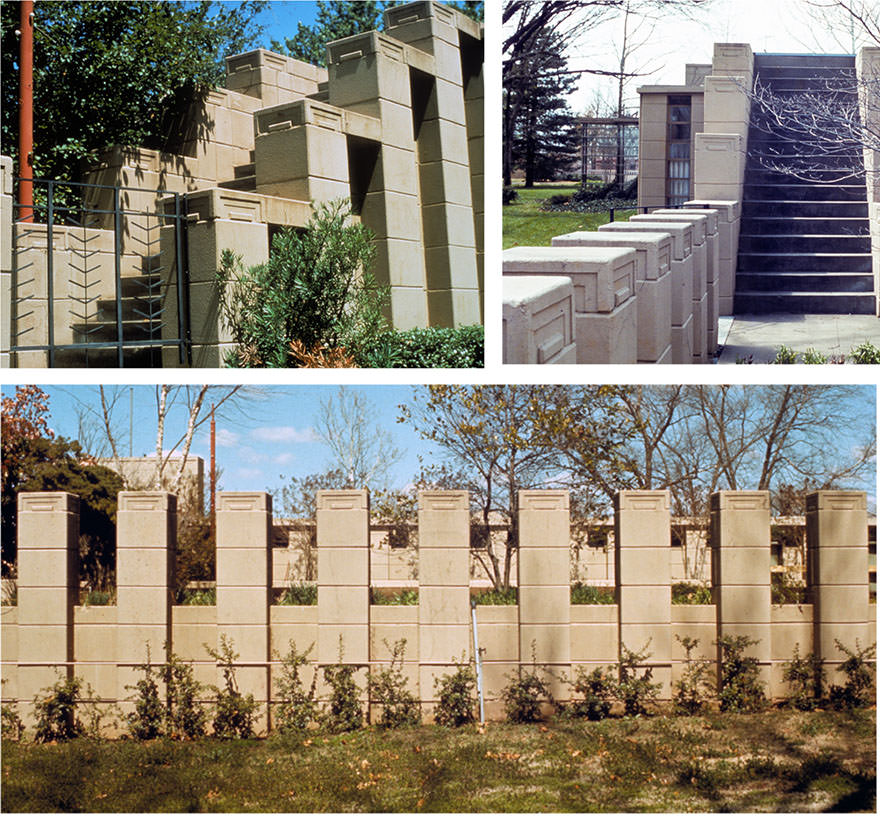 Excellent. Well, then, we might as well have the block drawings:

In part, Jones was a correction to the earlier block constructions. The 16"x16" textile blocks of Ennis et al made for awkward steps, and therefore only Freeman stayed within the unit lines, 8" risers, 16" treads. Ennis' marble steps have 16" treads and 5-1/3" risers, which are a more comfortable climb. Storer and Millard ignore the grid entirely.

In addition to extreme restoration inside and out (interiors are painted a sickly beige), Jones is in desperate need of imaginative landscaping.
Top

In my casual inspection of Wright stairs, over time, my impression is that more often than not the risers do no coordinate (are not coordinated) with any vertical coursing or module . . . as desirable as that might be, to me or to an architect interested in modular coordination. The exceptions -- those that are so aligned -- thus catch the eye ?

With the block system, the unit lines, horizontal and vertical, are so prominent that anything that violates them becomes more apparent than in a less obvious structural system. I think the fact that the division of the Jones' block fits perfectly with the standard scale of stairs strongly suggest that FLW had that in mind. To find a relationship between stairs and module in a building such as DD Martin would, of course, be next to impossible. Not so Storer or Millard.
Top

Thank you. Quite so. Fifteen by twenty -- a real departure for Mr Wright, who had always demonstrated loyalty to his American roots through the use of the base-12 system of measurement employed here from the start and long standardized in the construction-material industry.

At Ennis, where the 5-1/3" risers are used, the treads are 16", which take up a lot of room. There are only 3 places where they exist: from the entrance up to the main level, from the living to dining room and from the gallery to the service wing. There's plenty of room in each case.
Top

Right. Your stair calculations seem to favor adherence to one module or another, in both run and rise, over the user comfort conventions that suggest a combined rise + run of c. 17" ? A 6" rise/ 9" tread stair is close to that, while a 6" rise/ 18" tread is not ?

Ennis and Freeman were designed so everything fitted into the 16"x16" grid, including stairs. Jones was as well, within its 15"x20" grid. In both LA cases, the treads were one full block, while the risers were either half (Freeman) or one third (Ennis). With Jones, everything was on the 15"x20" grid or half thereof. The 7.5" thickness of the floor represents alignment of both upper floor and lower ceiling along those lines.

The point is, that a 54" grid does not work well with vertical dimensions for stairs.
Top

A portion of the Ennis street facade shows the use of right-hand and left-hand blocks . . .