You agree not to post any abusive, obscene, vulgar, slanderous, hateful, threatening, *-oriented or any other material that may violate any applicable laws. Doing so may lead to you being immediately and permanently banned (and your service provider being informed). The IP address of all posts is recorded to aid in enforcing these conditions. You agree that the webmaster, administrator and moderators of this forum have the right to remove, edit, move or close any topic at any time they see fit.
Post Reply
36 posts

(from the article):
"...he recalled a conversation he once had with Frank Lloyd Wright, the renowned architect who developed his linear Prairie Style of architecture in the first decade of the 20th century: "He said, 'Son, architecture began when I began building houses out there on the prairie.' What a confidence man, what a crook!""

The next sentences read: "Scully admired some of the buildings by Wright and other towering giants of modern architecture, including Walter Gropius, Le Corbusier and Mies van der Rohe, but he began to see an emptiness at the core of their designs. What they lacked, Scully concluded, was the human touch.

"He began to teach that architecture was about more than pure design. Its purpose was not to burnish the ego of the architect but to provide humane and beautiful places for community life to flourish.

"Practically alone among architectural scholars of the time, Scully began to emphasize the importance of the past. In his lectures, he stalked the stage, using a long wooden pointer to direct attention to images of Greek temples, the Sistine Chapel, French formal gardens, American Indian dwellings, New England town squares and Italian villages."


I did not hear Scully speak. I know him from two books, the Wright primer that many of us must have seen or owned in our early years, published in 1960 by G Braziller in the short series "Masters of World Architecture" (Nervi by Huxtable, Mies by Drexler, etc), and, much more recently, "Architecture, the Natural and the Manmade" (St Martin's, 1991) which, being a sort of world history of the art in its relation to site, affords Wright a mere seven pages and nine images, with which he treats Taliesin West as an object laid out within an array of sightlines, the most important of which are mountains in the landscape (or "horns," a term Scully uses repeatedly throughout). Scully clearly has warmed to Wright over the decades.


I suggest that we wait for further response, from critics and professionals presumably more experienced in architecture than the obit writer for the Post, which critique will appear in due course in the architectural press ?

I met Scully about a decade ago. I talked to him for a long time at a party at Yale. He is very entertaining even in small talk. I also sat in on one of his history lectures which was in the auditorium adjacent to Kahn's Yale Art Gallery. He was mesmerizing talking about classical Roman architecture. I recall he explained to his students that the Romans were basically a bunch of skinheads.
Top

The Post writer mentions "a World War I memorial in France commemorating soldiers killed in the trenches." Scully's piece on this work, Edwin
Lutyens's memorial at Thiepval (1932), was capable of raising the hairs on the back of my neck when, after showing us his old photos of the structure,
he describes it thus:

"We arrive at the height, the objective. The monument looms over us, stepping mountainously up and back in brick and white trim like one of the
American skyscrapers of the 1920s. It is also an enormous monster; its tondi are eyes; its high arch screams. It is the open mouth of death . . .

We descend from the monument, approaching the graves . . . It should be said that everybody who visits the monument is weeping by now. It is this
that does it: the terrible courage of human beings advancing in the open toward the monster, who is absolute -- absolute pain and nothingness. He is
emptiness, meaninglessness, insatiable war and death. There is no victory for the dead. All that courage wasted. It is not to be borne."

Scully must've highly admired Wright's talent since he hired him to design his own house in 1948.
Unfortuntately, he couldn't afford it once the construction bids came in so it was never built.
Here's what's shown in Monograph 7: 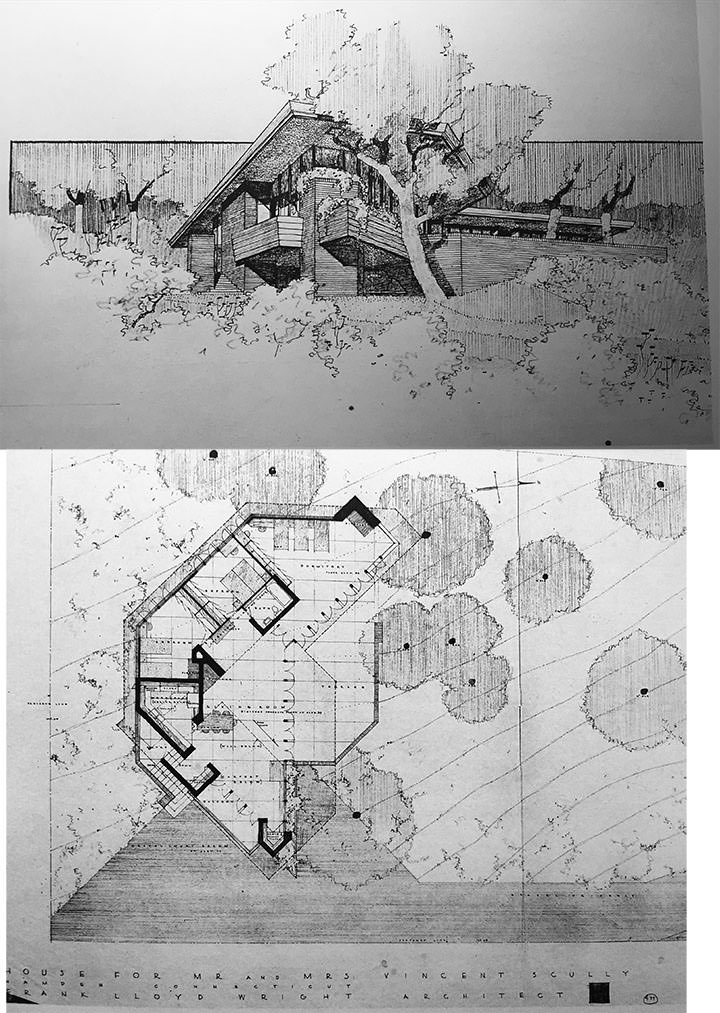 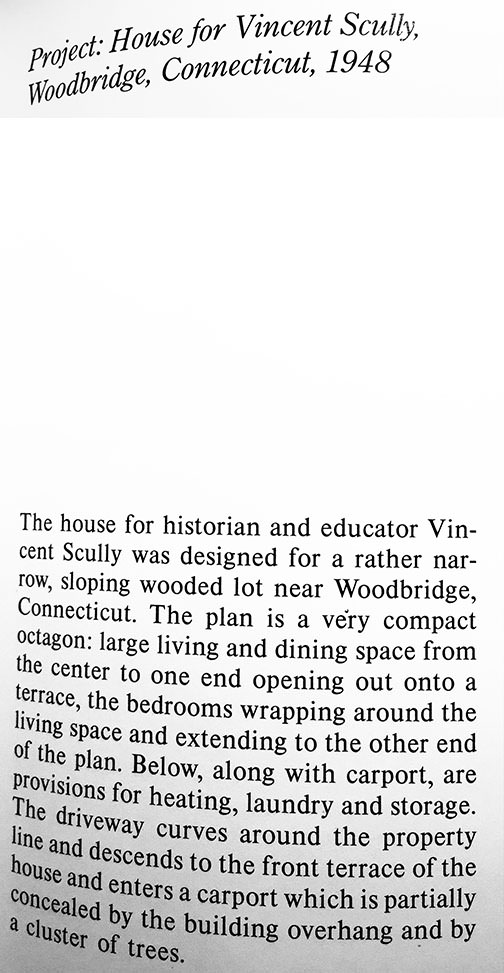 Hope James won't be offended if I up the ante, with color images of (presumably) the same drawings, from Taschen.

Much better !
Now we can read the floor plan.

He was born in 1920, so he was only 28 years old in 1948. The "Dormitory" would've been for 3 young children (from his first of three marriages). After the war he'd returned to Yale in 1946 and finished his PhD thesis in 1949 (later published as his book on the Shingle Style). So, I imagine he could've really used a private study or library in this house, but we only see a small desk in the corner of his bedroom. I would imagine he'd have plenty of books, which were presumably accommodated on shelves near the south triangular corner, where at the tip of the triangle we see a built-in nook for the "radio & record player". With the family of five, that single bathroom would've seen plenty of use. With three fireplaces it would've been cozy in the winter.
He was a bold young man to hire Frank Lloyd Wright at that age & stage. I wish it had worked out.
Top

W A Storrer points us to a house built in Virginia which is a "near replica" of Wright's design:

But Scully had a different and much simpler, flat-roofed house built in the Connecticut woods. I'm trying to find it; I thought maybe we had discussed it here a couple of years ago.

'The Earth, the Temple, and the Gods' is another good book of his.
Top

Scully spoke at a FLWBC conference in Chicago at the Auditorium Building. The subject was primarily how FLW used his apprentices as free labor, drawing parallels with slavery ... which I thought a bit over the top.
Top

It's been awhile since I saw the thing, but I remember that Scully was one of the talking heads on Ken Burns's FLW documentary. I don't remember if his comments were, on balance, positive or negative.
Top

Anyone in architecture with a shred of self-respect is likely to have said something at least mildly critical of Mr Wright, at some point. I know
I have. But it seems that Mr Scully has been, as you say, an admirer, and from an early date, to judge by his premature commission of a house design.

Seven pages of 370 in a wide-ranging architectural history may not be enough for the Wright aficionado -- seventy would not be enough, either,
probably, or 170 -- but I have a suspicion that Wright shows up in every one of Scully's books. Like another big talker, Philip Johnson, Vincent Scully
has found things to question in Wright's career, but their occasional burps should not be mistaken for disrespect, it seems to me.

It was Scully, in that "child's introduction to Wright" (my characterization), who made so bold as to publish this pair of images in 1960:

There are those "horns" again. I'm sure Mr Scully can be a bore, at times, like any dedicated academic, but he seems to recognize Wright as
a force to be contended with -- at least ?

I went and looked at the first half of the Ken Burns thing, and Scully appeared twice. He spoke beautifully & poetically at the 27:25 mark. And, then again at the 41:00 mark.

At 41:45 in the YouTube is an image of the ends of the pews of Unity Temple, a detail mentioned in an earlier thread. The curve in the drawings of this almost relentlessly (but for the light globes) rectilinear space look somewhat jarring, but they work to soften the hardness all around.
Top
Post Reply
36 posts