You agree not to post any abusive, obscene, vulgar, slanderous, hateful, threatening, *-oriented or any other material that may violate any applicable laws. Doing so may lead to you being immediately and permanently banned (and your service provider being informed). The IP address of all posts is recorded to aid in enforcing these conditions. You agree that the webmaster, administrator and moderators of this forum have the right to remove, edit, move or close any topic at any time they see fit.
Post Reply
61 posts

Looking for some more info..... found the "Walter Channing house"....the only Richardson designed home in Brookline. 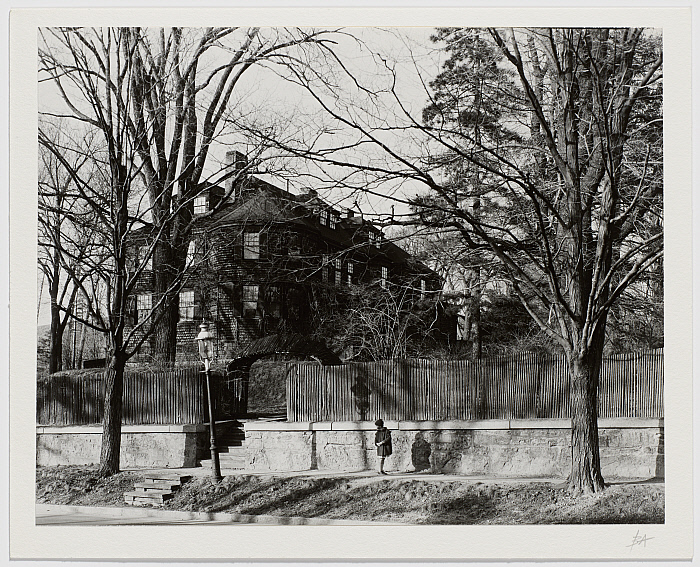 And here is a bit of info on "Cliffside", the John Charles Olmsted home next to Richardson's house:
https://books.google.com/books?id=YBKxb ... ed&f=false
Top

The Stoughton house in Cambridge is usually shown to history-of-architecture students. But there are a number of others, in all materials. An interesting example is found in Washington DC, opposite the White House: https://eversco.com/two-families-one-roof/

A little collection of Henry Hobson Richardson residences, for city, suburban, and country settings. Richardson was an acknowledged inspiration to Frank Lloyd Wright.

Glessner facade: Form follows function ? Chimneys sized and placed as needed; extension over drive at left allowed to be flush with face of main (symmetrical) volume.

SDR, thanks for posting the Richardson houses. This discussion is motivating me to study up on Richardson's work at some point.

As for the architectural drawings from the Olmsted firm, I haven't seen too many when looking through their archives. When they did design buildings, they were usually utility-type structures for parks; such as a bathhouse for a swimming beach in a park....
My guess is that John C. Olmsted did his own remodel for his house and had fun doing so... Olmsted Sr. had done essentially the same thing when they bought "Fairsted"... Here are the archives for that project, which have some architectural drawings:
https://www.flickr.com/photos/olmsted_a ... 4550/page1
Last edited by jay on Thu Dec 24, 2020 9:57 am, edited 1 time in total.
Top

Looking through some of my Olmsted books for more info. on the Richardson connection... "Frederick Law Olmsted: Designing the American Landscape" by Charles Beveridge devotes a chapter to the partnership, with some excellent pictures.

After Richardson's death, Olmsted gave this quote to a biographer:

"I cannot express, or make those who did not know him even dimly understand, how much Richardson was in one's life, how much help and comfort he gave one in its work. It was not always that he could do much, but he would do what he could when other men would only have talked about it. And when he could not do anything he would yet take such an eager, unselfish, and really vital interest in one's aims and schemes, try so seriously to understand one's difficulties, and declare so imperiously that they must and should overcome, be so intensely and intelligently sympathetic, give, in short, so much of himself, that he was the greatest comfort and the most potent stimulus that has ever come into my artistic life."

Man, to be a fly on the wall during some of their artistic discussions...

And this bit isn't so much about Richardson, but has Olmsted discussing architecture in a manner that sounds very much like Frank Lloyd Wright:

"Their (Olmsted and Richardson) next important project was the New York State capitol in Albany, where in 1875 they began to serve with the architect Leopold Eidlitz as an advisory board. They faced many problems, including the uproar that met their proposal to abandon the Renaissance style of architect Thomas Fuller's first two stories and substitute a Romanesque style for the upper section. Olmsted was not particularly interested in debating which historical style to use for the exterior of the building. It was the ability to serve its function that concerned him most. "Architecture is the art of building, not merely of ornamenting nor in any way of veiling or covering up a building," he wrote in one of his reports on the state capitol. Architects should look to the past "not for forms but for the cause of forms," and should avoid "all useless construction and uncalled for ornament." Olmsted very likely provided a continuous argument on this theme, emphasizing simplicity of form to function, during those "all-night debates years ago in Albany" with Richardson and Eidlitz that he recalled years later." 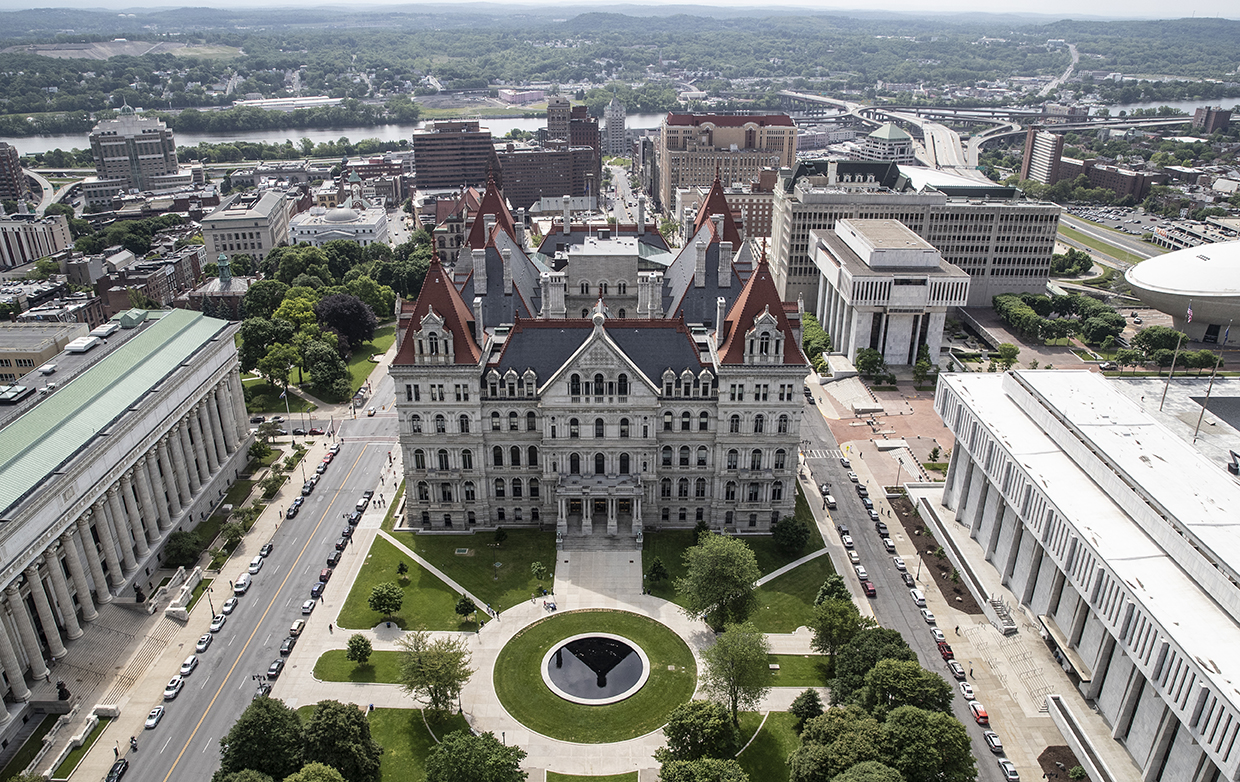 The other notable focus of the book is a review of the Oakes Ames Memorial Town Hall of which the pair collaborated:

"The memorial hall, begun in 1879, is the first example of Richardson's enthusiastic experimentation with building on rocky, picturesque sites in association with Olmsted. In planning the grounds Olmsted left bare the ledges on which the hall is set and even removed earth to increase the ruggedness of the site. He then planted pockets in the rocks with honeysuckle, juniper, yucca, and sedum to produce a low-massed and wild effect. Richardson spread out the base of his massive structure, extending it with basement walls, a terrace, and a broad staircase approach."

In the 'seventies I lived a dozen miles from Easton, MA, where the children of Oakes Ames built several Richardson-designed structures in the 1880s. Brothers Oakes and Oliver Ames were the operators of the very successful Ames Shovel Company in North Easton. Oakes entered Congress as a Representative in 1862 and was instrumental in establishing the project that became the first transcontinental railroad.

I once spent some hours photographing these buildings up close. I no longer have the Kodachrome slides that were the product of that session. The photographs linked and shown here convey the colors and textures, the robust forms that characterize these buildings. 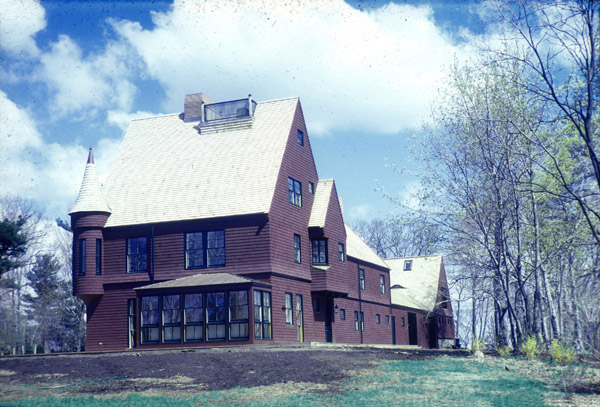 The Bigelow house is mentioned last---and mysteriously---in this intro to the residential section of the catalog to a 1974-5 exhibition of drawings from the Richardson office, organized by the Department of Printing and Graphic Arts, Harvard College Library. (The photographs of other Richardson houses posted above came from the same volume.)

The only other mention of the house is in a note to the effect that, contrary to previously published information, the Bigelow was not built by O W Norcross, Richardson's "Master Builder."

The Richardson house that fascinates me is the demolished McVeagh House on Lake Shore Dr., a block from FLW's Charnley House (which see, Longstreth book, page 83).

I'm probably repeating myself, but frankly, when I finally got into it in 1987, I did not like the Glessner House interiors. The exterior is grand and new, but the interior is just the same old stuff the Victorians had been dishing out. There seems to be few images of Richardson residential interiors, and one where interiors are shown, Wm. Watts Sherman, were done by Stanford White only 4 years after the house was built. One other, Stoughton, one of Richardson's finest exteriors and plans, is in the Colonial style. It is obvious that Richardson's claim to fame is the nonresidential work.
Top

Yes---and as the above-posted paragraph states, Richardson left much to his underlings.

It seems we have hijacked Jay's thread about F L Olmsted and concentrated on his friend and collaborator H H Richardson. But, in for a penny, in for a pound, as they say: Here is the first third of James O'Gorman's final chapter, "Legacy," from the 1987 H H Richardson: Architectural forms for an American Society.


O'Gorman spends much of the remains of the short chapter discussing Wright; as such the book should be on any Wrightian's reading list, I'd say.

It seems we have hijacked Jay's thread about F L Olmsted and concentrated on his friend and collaborator H H Richardson.

I do hope the joke's on me, though. Clearly I've steered this thread to Olmsted... a sneaky habit of mine, lol.

One more interesting note; in Witold Rybcyznski's "A Clearing in the Distance", he writes an actual scene from "25 Cottage Street, Brookline, MA" (page 344). It paints the picture of a working office and home, and offers this explanation for why Richardson used his underlings so much:

"....Richardson is far from healthy. He suffers from a hernia that sometimes incapacitates him for months on end. During these periods he directs his practice from the second-floor bedroom."

Also it appears that Richardson did build his own house...when he lived in Staten Island, prior to moving to Brookline.
http://nycnpc.org/db/bb_files/2004HHRichardsonHouse.pdf
(photos at bottom of document)
Top
Post Reply
61 posts