Instead of symmetry, wouldn't this be more of a discussion of massing and proportions?
KevinW
Top

Wright's Prairie work seems far more symmetrical than his Usonian work. I'd assume this was due to his Usonian "break the box" agenda, and the use of cantilevering.... Did Wright ever specifically address his asymmetrical evolution (using those terms)? 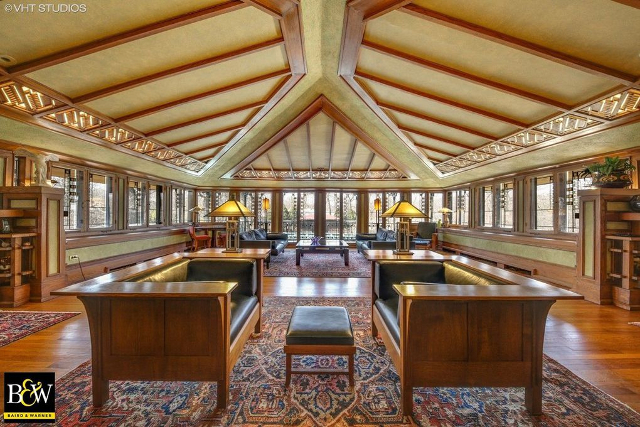 It would seem a given that an artist would aim for balance---analogous, in some way, to the engineer seeking physical balance in his structural calculation ?

Peter, "prospect and refuge" would be yet another example of the provision for, and the balancing of, opposites in architecture ?

Kevin---exactly. The Beaux Arts symmetrical envelope---perhaps placed in a symmetrical landscape---is a prime example. In the early years Wright can be
seen arranging partitions to align with window divisions on a symmetrical facade. The habit survived into the late career, with uninterrupted bands of sash
serving more than one space---but the forced symmetry was gone by then.

Jay, the photo presents a largely unWrightian furniture arrangement. While he was apt, in the Prairie work, to have a centered and symmetrical
fireplace---and the seating immediately associated with it was often balanced and equal---other furniture in the room would be more freely
(if carefully) placed.

The symmetrical furniture placement is certainly intense (not that that was my reason for posting the photo)...

Wright's work almost always displayed balance in plan and perspective despite his preference for asymmetry...many architects rely on symmetry for balance. Symmetry seems to have been something he rarely used in total, and more often than not, it was "localized"...the end of a wing in elevation appears at any number of the Prairie houses, as does symmetry in some of the art glass designs. In the glass, Wright seemed to move away from symmetry as time went on and his compositional skill evolved.
Top

An aspect of architectural symmetry is that it will almost always be perceived, on the ground, asymmetrically---for what that's worth. Wright's
illustrations of such buildings are presented thus, often in three-quarter views . . .

See Constantinos Doxiadis, page one of this thread, re 3/4 views of buildings on the Acropolis.

All of Wright's institutional and commercial work, in the early period at least, is composed of volumes symmetrical about one if not two axes. The
formula returned to repeatedly is the joining of major and minor volumes, each displaying symmetrical features, the total amounting to a form
symmetrical about a single axis. The following exhibit one or both of these features:

Considering the importance of this subject to the discussion of architecture---including Wright's---it is surprising to find, in Laseau and Tice, "FLW --
Between Principle and Form," only one page devoted to symmetry/asymmetry. The single page, and its single less-than-satisfying illustration:

Norris Kelly Smith, "FLW, a study in architectural content" seems to ignore the subject completely, as does Hildebrand---though that may be beside his
major interest. Yes, we are discussing form and composition, not spacial qualities . . .

With respect to the Rule of Thirds, break the rule! That approach results in stasis and repose, which is often the desired goal for pictures, but boldly asymmetrical, even unbalanced, compositions are needed to create movement, dynamism. This ability to mess with the rules is often the difference between FLW and his imitators, whose work is often stolid and lacking animation.

FLW was very formal in his early approach, and he spent years getting over it. Winslow is perfectly symmetrical on the street front, but in the back, the porte cochere, stair tower, lone dormer and unbuilt pavilion defy the formality of the front. Nevertheless, classic symmetry pervaded his work throughout the Prairie era. But it was handled differently. Hollyhock is awash with symmetrical elements throughout the house, with axes of symmetry tossed about like Chinese pickup sticks. That apparent formality gets in the way of many who critique the house.

It was when he went to the desert that he set aside symmetry, which he believed was inappropriate for the dotted line of the environment. "There is no place for symmetry in the desert," he said.
Top


Perhaps my favorite examples of this branch of bogus aesthetic rule-making come from "The Old Way of Seeing," a 1994 volume written by architect (!) named Jonathan Hale. His book contains illustrations like these:

And, most hilarious of all---lines emanating from or connected to extraneous objects on the picture plane
that have nothing to do with the subject building ! Is he pulling our leg ? No, he is entirely earnest . . .

Now, it may be that an example in Goodlet's piece, a painting containing a receding row of trees, illustrates a couple of moves that might attract and please the
subconscious eye of the beholder; I can't say that it doesn't. But I remain highly suspicious of the claim that objects---especially objects of art---might appeal to the
viewer because they contain hidden geometric "truths." Is the proponent of such a theory suggesting that an artist or designer consciously relies on devices like these
---or that he too is unconscious of what he has done ? Proponents of these theories seem vague on that point---as if it was of no consequence to their argument . . .

If you extend the lines of the two curtains in the windows of the bottom building, they will both be tangent to the left side of the smaller of the circles which surround the lunette.
This predicted the Age of Aquarius.
Top

And . . . just when the earnest but skeptical Wrightian is ready to throw up his hands, Mr Hale comes up with this:

with an accompanying "explanation." The Stone house mentioned is the third of the sample illustrations in the post above.

"The eye, seeing the finished building, compensates for the differences in distance, to make the necessary connections." Really ? I don't think so . . .