You agree not to post any abusive, obscene, vulgar, slanderous, hateful, threatening, *-oriented or any other material that may violate any applicable laws. Doing so may lead to you being immediately and permanently banned (and your service provider being informed). The IP address of all posts is recorded to aid in enforcing these conditions. You agree that the webmaster, administrator and moderators of this forum have the right to remove, edit, move or close any topic at any time they see fit.
Post Reply
66 posts

The bricks I wonder about appear in the photo Roderick mentioned:

and in another, a few pages on:

So -- why these shallow bricks ? . . . and the following questions, posed earlier. (I'm surprised that an architecture journal would print the suggestion that the corner bricks were intended to form a visual accent -- the very thing Wright of all people would seek to avoid !
-- to wit: ". . . including the specially designed corner bricks that created a quoin effect . . .")

Well, yes -- and it's clearly not just the corners but a whole course. How many courses ? The whole wall ? And if these are all cull bricks from Johnson Wax, what's going on there ?

So, we find this about the bricks, on page 29 of the Jacobs book -- after several earlier passages on the preceding pages where the cost of brick -- $17.50 per thousand vs Wright's quote of $12 for brick from the Johnson -- is discussed. P B Grove, the builder, had come up with the figure of 22,000 bricks needed for the job. Then, after complaint from Jacobs about the higher figure, Wright announces that a larger brick was now planned (did something change at Johnson ?) and the cost would remain at the original estimate.

"My recollection is that the apprentices [Bennie Dombar and Jim Thompson] themselves solved the matter of the bricks by producing sufficient culls (bricks with slight chips, wrong color, or radials) from the Johnson administration building job, now well under construction. The culls went for the original price quoted by Wright to Grove . . . For looks, Wright also insisted on specially-made, L-shaped corner bricks in our house,"

Aha. The way in which these L-shaped bricks would contribute to the appearance of the house is by replicating the look of full-depth brick, woven conventionally at the corners. This implies clearly that the shallow bricks were being used throughout the construction, and that Wright (naturally) wished then to appear as full bricks. It's entirely possible that so few square corners occur at Johnson that there would be no extras available to lavish on Jacobs -- I suppose.

Now to look for construction photos of Johnson -- and Wingspread ? -- to see if these quasi-face brick show up there.

Nice, "the quasi - face brick" theory.
That seems logical to me.
Yet I'd like to see better photographic confirmation.
When you say, "clearly" it's not that clear to me.

and do I understand you correctly to be saying that Johnson
and Wingspread might be "quasi-face brick construction too?

Does that imply a poured concrete core?
Why "quasi - face brick" in the first place?
Top

Man, those are great photos! How interesting.

It looks like he's creating a cavity wall. At the ends of the walls he's got 9" + 3" making a 12" thick wall, consisting of 2 wythes of 3" deep brick and a 6" cavity.
Usually a cavity like that might be needed to contain ducts, wiring, columns, or pipes. Different pipes could include: roof drain pipes; water supply; gas supply; sanitary sewer; or vent stacks.

I expect the only need in Jacobs might be for the gas flue from the boiler; vent stacks, and possibly waste piping that might pass thru the wall rather than the floor. It looks like there is a cast iron pipe emerging from the cavity in the wall beyond the fireplace in the construction photo.
Top

Because, as it turns out, Wright designed a new wall system for Johnson Wax, a screen wall with the same appearance inside and out, a thin wall with insulation and strength, based on his previous experiments. Jonathan Lipman, p 46:

"Double rows of bricks, specially designed by Wright, were laid either five or eight inches apart. Three-inch thick slabs of insulating cork were placed between the rows of bricks. Steel reinforcing rods were put in place, and the gaps between brick and cork filled with concrete. The interior [surfaces] of the bricks were jagged, to bond firmly with the concrete.' I have found no photos of the back of these bricks -- but Lipman produces three images which illustrate the system.

And there's the Jacobs brick.

Not surprisingly, the Jacobs drawings do not indicate this brick; it wasn't developed for this project and wasn't initially intended, as implied if not stated in Jacobs's book. I don't see evidence that the cavity was made use of; Wright had already placed the various ducts and chases conventionally. I would be interested to see if that is incorrect . . .

Been a very long time since I've looked at the wall sections of Johnson.
When the cork is in the center I wonder if there were any sort
of cross ties?
Seems like a difficult wall to construct = very tight concrete pours.
Wonder how they did it?
... but I'm wandering I guess
Top

I expect that concrete pours would occur after a certain number of courses had been completed ? That's what I'd be comfortable with . . .

As to ties, Wright had dispensed with them, counting on the adhesion of the concrete to the brick. (How he thought the cork would hold the thing together I can't imagine.) In any event, the Industrial Commission required "substantial" copper ties every six courses before they would permit construction (Lipman, p 46). These presumably passed through the cork, and further interfered with the placement of that and the rebar, and with the pour.


The Johnson section above may be the only one produced for the project. Lipman begins Chapter 4 this way:

"Under Wright's direction the apprentices began to prepare working drawings at the end of August of 1936 and drafted a set of eighteen or twenty drawings -- very few for a 54,000-square foot building, because Wright wanted to convey the underlying simplicity of the building's concept. Floor plans, two pages of column details, and a single partial section were sufficient to explain most of the Great Workroom . . ."

Seems like there would have to be vertical dimensions somewhere?
Top

I've been reading over some of the comments and can hopefully clarify some of the questions raised.
1. The ceiling boards are ALL original. Each board was numbered upon removal, refinished and put back in the original place.
2. The hallway ceiling is raised by one 2x4. Wright varied the height with the number of 2x4's used in the sandwich of the roof construction. The photo on the left shows that the hallway is located at the transition of the bottom 2 2x4's so he elected to keep the height at 7'-4". Less claustrophobic and it allows the windows to be 4 inches taller in the hallway (more light). The entry (approach) to the front door has a subtle height variation to telescope the height down to the 7 ft. 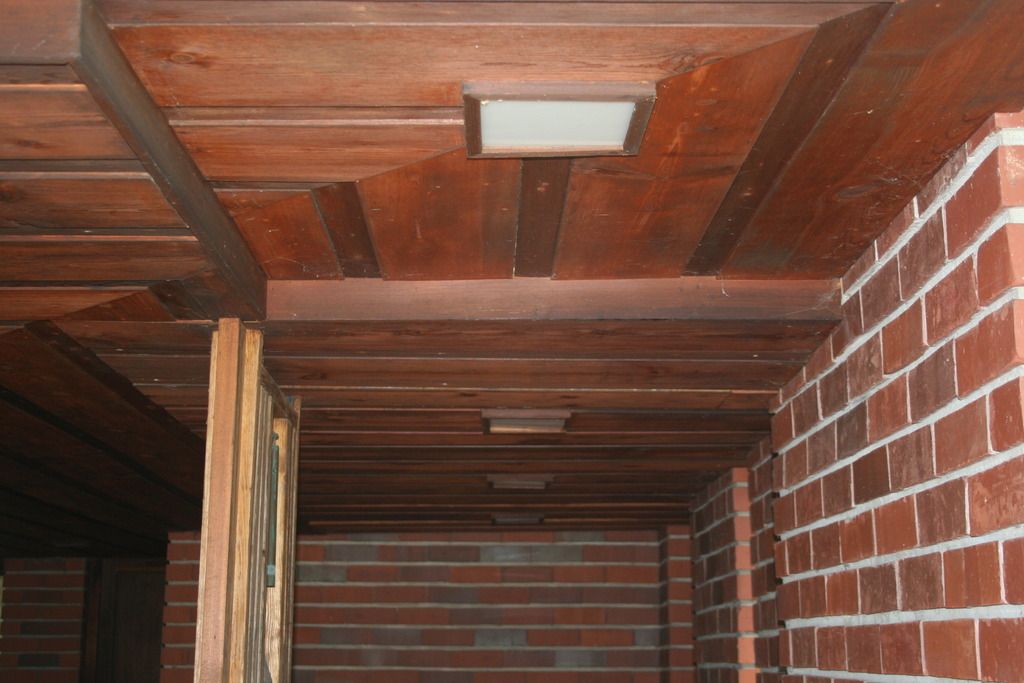 Wright designed the house to use the same brick used at Johnson Wax. It seems he thought they could either make extra or steal what was needed (latter won out). There is a vertical module of 1 ft., i.e. 4 bricks, that corresponds to the module of the wooden siding.

The bricks were laid up normally, but because of their thin depth, and recessed horizontal mortar joint, there was very little mortar holding them in place (less than 1 inch)

New bricks were hand cut from the original manufacturer (Streator Brick) but were made thicker for more stability, and to show that they were not original. The range, or varying color, was obtained by mixing small amounts of manganese which gave the red brick a more red color. Wright would have had to specify this color variation as well for JWax.

Finally, the carport "fulcrum" consisted of only 4 2x4's, which was a little frightening. We inserted steel "t" channels for additional support. Threaded steel was used to hold down the carport roof at the flitch beams. After all of the dead load was installed (sheathing, ceiling boards, etc.) the nuts were tightened to obtain a level roof. During the winter the roof deflects, allowing snow to melt off to the side.

most importantly, the pier at the carport rested on a thin 3-1/2 inch concrete slab with no radiant heating to prevent frost heave. A full 3'-6" foundation was installed.

outside, how about that dining room bay? Was that quick fix left in place? Did your rebuilding restore the original idea, albeit somewhat more structurally sound?
Top

from Roderick Grant
The owner of Gilmore, whose name I cannot remember for the life of me, was a FLWBC member for a long time, a long time ago. I don't know if she still owns the house, which she inherited from her parents, but she is a very interesting ophthalmologist and teacher, and might open her house for you.

The daughter of the parents who owned Gilmore for many years still owns the house. We met her at the Wright homeowners dinner at the Milwaukee Conference at the Pfister Hotel. She is a character (sorry her name escapes me). I told her a story. I grew up in Madison and would sometimes take friends on bike tours of all the Wright houses and structures in the city. It makes for a nice bike ride. One time, when we were at Gilmore on the sidewalk, an old woman came out of the house. She said to us, "so you like Frank Lloyd Wright?" We nodded our heads and said "yes." She replied, "You should have to live in one of his homes!" and she stormed away. When I told the daughter the story, she loved it and said, "that would definitely be my mom." Little did I know at the time I would own a Frank Lloyd Wright home someday. It makes me laugh.
Top
Post Reply
66 posts