You agree not to post any abusive, obscene, vulgar, slanderous, hateful, threatening, *-oriented or any other material that may violate any applicable laws. Doing so may lead to you being immediately and permanently banned (and your service provider being informed). The IP address of all posts is recorded to aid in enforcing these conditions. You agree that the webmaster, administrator and moderators of this forum have the right to remove, edit, move or close any topic at any time they see fit.
Post Reply
200 posts

The lighter section is tinted concrete, the darker is the stone used in most locations. We believe it was part of the original construction at part of the rear of the building.
Top

interesting. You would agree with the following scheme ? 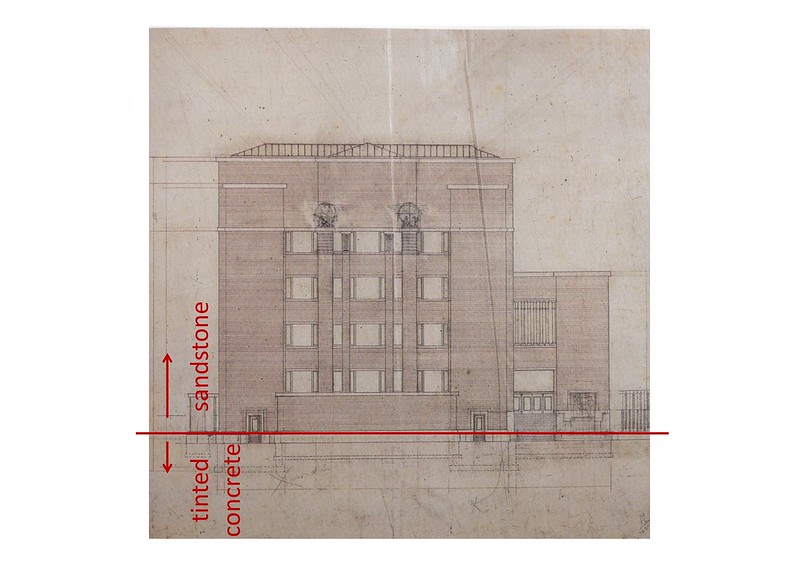 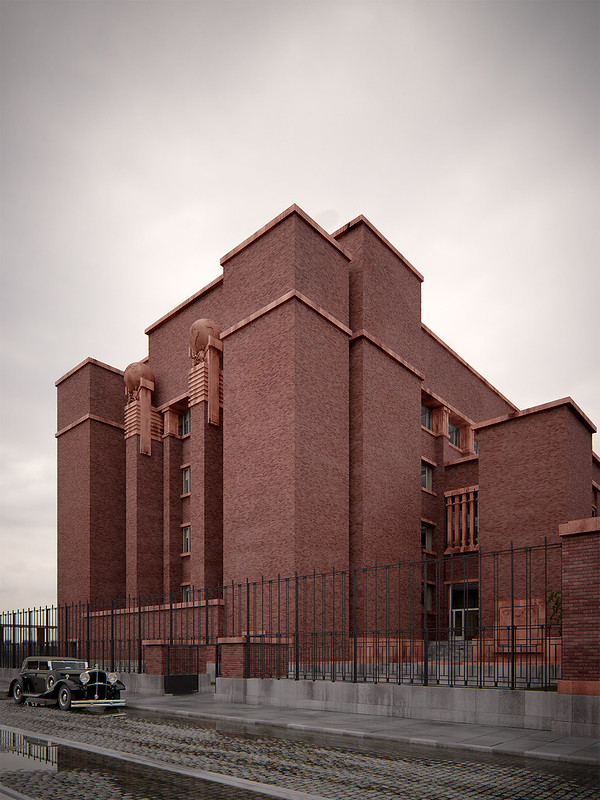 Again, this is only a test, I still have to work with the materials but that's something that will take me some time.

If I had to bet, I'd say the base is concrete: 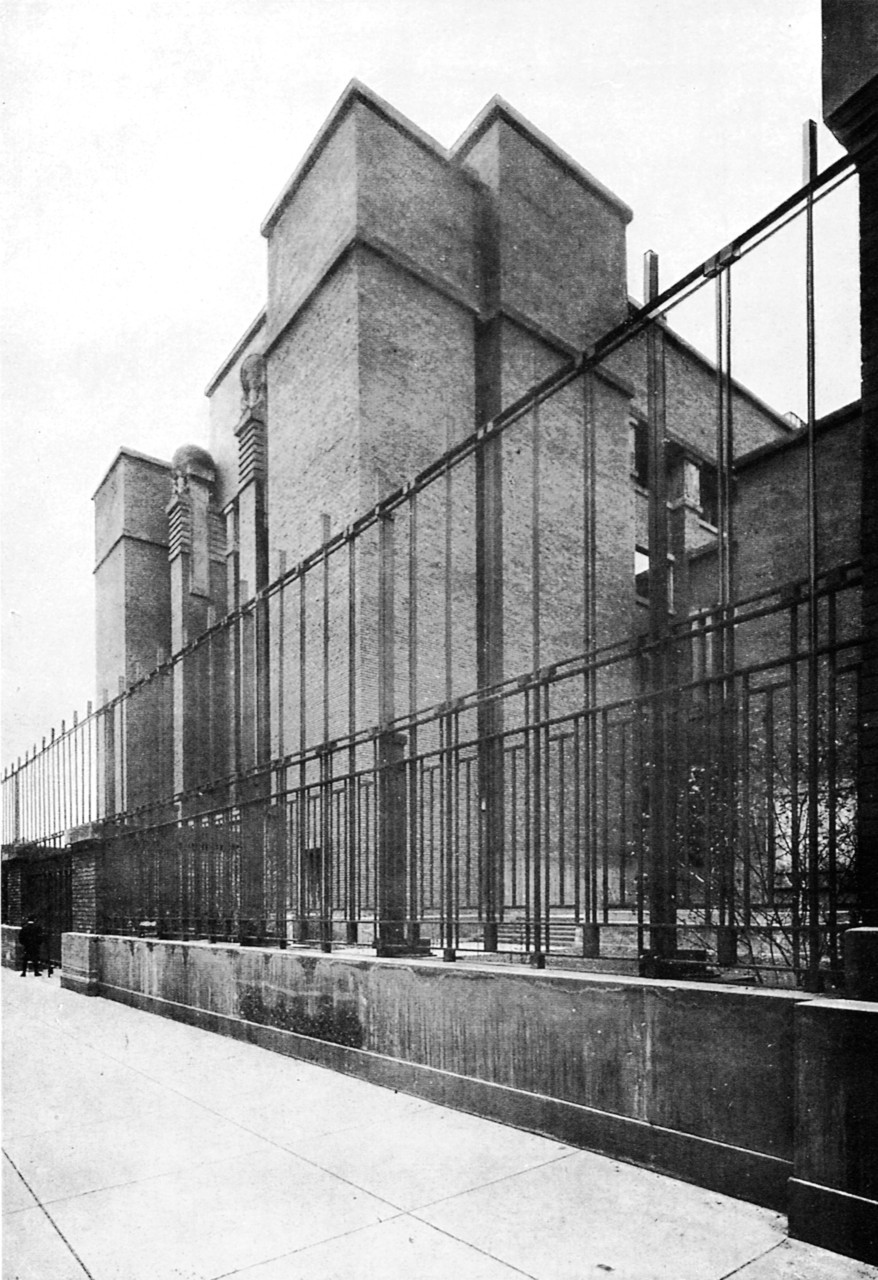 I'd like Pat to weigh in on this, as he's been at the site. David, what has been your experience ? I assume you have Jack Quinan's book; have you been able to visit the site ? I'm still trying to assess what's seen in those close-up photos. Are they yours ?

One possibility to contend with is that the tinted concrete, assuming it is original to the construction, may have faded in color; whatever pigments were added to the mix would have been at far lower concentration than are the pigmented contents of stone or brick.

One photo shows, among other things, some coated concrete, the coating being very pale. Do we have to do carbon dating to know the ages of the various elements in that one remarkable photo ? Note the wear to the red stone; what was once square (?) is now beveled and rounded.

Another question I have: do you intend to present the building as it was when new, or as it was after some years of existence ? My choice would be the unweathered condition, because it would present the freshest colors and the most uniform textures. If that is indeed the case, then the test you show is quite convincing, with the possible exception of the gray base.

Do we not think that the intent would be a uniform color throughout ? Pat's photo shows a red sidewalk . . .

So, is the famous shot of Larkin really the "back" of the building?
While the "front" is the elevation with the arch, which has something of a plaza in front of it adjacent to a main transportation artery, like Midway?
Top

From my recollection, The arched entry at the rear of the building on the ground floor gave access to the mail trucks that brought in large numbers of letters/ orders.

The entire front of the building used stone from grade upward. There is a twenty foot section of tinted concrete on the remaining intact fence pier at the rear of the site. When we built the phantom pier (front left of the complex) we incorporated the remaining stone base. Much of the stone base at the front of the building (fence line) was removed in the last thirty years.
All of the original sidewalks were thought to be grey concrete, the red sections in my photo have been added to interpret locations like the atrium and main entry.
Top

Tom, the Swan Street faÃ§ade with the arched opening was the back. The trucks that drove into the building through that entrance delivered thousands of letters each day. However, the Seneca Street entrance was repeated on Swan, as the plans show, gaining access to the same entry lobby, and sporting the same glass doors and fountain.
Top

Got it.
Thank you.
Top

Quinan does not supply the reader with a photo of the Swan Street arched opening, but it appears in this drawing, on p 45:

Note that a fountain is not included in this elevation. The other differences as compared to the opposite elevation at the top
of this page are also interesting. Quinan details the changes that occurred during the design process . . .


The intaglio panels above the two fountains vary slightly:


Most interesting of all, perhaps, is this construction photo, which clearly shows the building base at the entrance not adorned -- yet -- with its fountain and panel:

As to color, the fountain and panel in many photos is distinctly different in tone from the stone building base below it. As the panel with intaglio decoration is finely carved, and
was added to the building after the brick and stone was in place, might it be possible that the material was different from the red sandstone found throughout the exterior of the
building -- including presumably the large sculpture with orb that caps the columns ? In most photos the fountain and panel appear lighter than all the other trim. The question
then is, was the harder (?) material also red in color ? Based on the few colorized images we have, the answer appears to be yes.

SDR wrote:The book on the building, by Jack Quinan, mentions only red sandstone as the material for trim, presumably including the exterior sculpture and the intaglio panels above the fountains. So, relying on the material samples above, David should tint these parts of the model to match ?

It may be that the fountains were made of slightly paler red sandstone.

Older colorized images, as well as many black-and-white photos, seem to support these readings:

Ah. So, a monochrome effect -- something we see in Wright from time to time -- was the intent ? Let's model it that way, and see what it looks like . . .

I'd never in my life seen that elevation drawing with the arch.
Amazing.
Might just have to purchase Quinan.
Top

The first time I saw pink crushed rock, I knew I was someplace special. It was the driveway of the Max Hoffman residence, in my home town.
Neil and I were in the rocky and woodsy part of town, seeking modernism on our bikes. We'd heard there might be a Frank Lloyd Wright house
down on Manursing Island. He rode a blue Schwinn Roadmaster; here's me on my Rudge three-speed:

Patrick, thanks for the clarification, so I can forget the whole idea of the tinted concrete in my images.

SDR, Must I introduce myself? I'm an architect, IÂ´m Spanish (excuse me for any spelling mistakes) I have a wife, two daughters and a hamster and I am a great admirer of FLLW work (like everyone here, I guess). I read some books, including Jack Quinan, but I'm far from consider myself an expert on the subject and that's why I need your inputs. My area of expertise, if I had to choose one, would be the architectural visualization.

And back to the subject, I've never been to the place where the Larkin building was built and those photographs are not mine, I found them online. I intend to present the building in its greatest splendor, although some degree of use and dirtiness is necessary to make the images look real.

Thank you gentlemen, I think I have enough information to improve my images, as soon as I have something I will show you. The question of the sculptures is still open, I'll try to introduce a lighter tone than in the rest.
Last edited by David on Sun Oct 02, 2016 4:45 pm, edited 2 times in total.
Top