by Paul Ringstrom
http://www.zillow.com/homedetails/63-Ch ... 4727_zpid/
by SDR
Photo 9, of the living room, reminds me of a simpler version of the apex, at Lautner's 1953 Tyler residence. Lautner's own Sankaku also has a 60Âº corner to its main space, with triangular terraces on both flanks (Tyler has one), but there the fireplace is opposite the acute corner . . .

In photo 22, of the principle bedroom, does anyone think the fireplace is over scaled for the space ?

Richardson really is sublime. Among many other charms, I like the ceiling boards running through the kitchen window and out to the carport, carrying the eye to the beyond.

Taschen tells us that Wright named this house "Scherzo." Sergeant says the house was designed in 1941 and built ten years later.

SDR
by Iowegian63
That bedroom fireplace does seem really big for the room. I always enjoy the little bijoux fireplaces Wright stuck in rooms like this---this is not one of them!
by SDR
He did sometimes raise the hearth above the floor; I wonder where the most elevated example resides . . .


In Monograph 6. p 299, Pfeiffer gives short shrift to the house, showing only this plan and the elevations, beginning his longer paragraph with, "The Stuart Richardson house and the
Vigo Sundt house are basically the same plan . . ." and concluding with, "There were, unfortunately, many modifications made to the original scheme when the house was constructed,
and the as-built product little resembles the working drawings in use of material, scale and details." Goodness . . .


John Sergeant, p 65, published a slightly less informative version of this Sundt plan, found on p 302 of the Monograph, and presented it as the Richardson residence. The differences
are numerous, in fact . . . 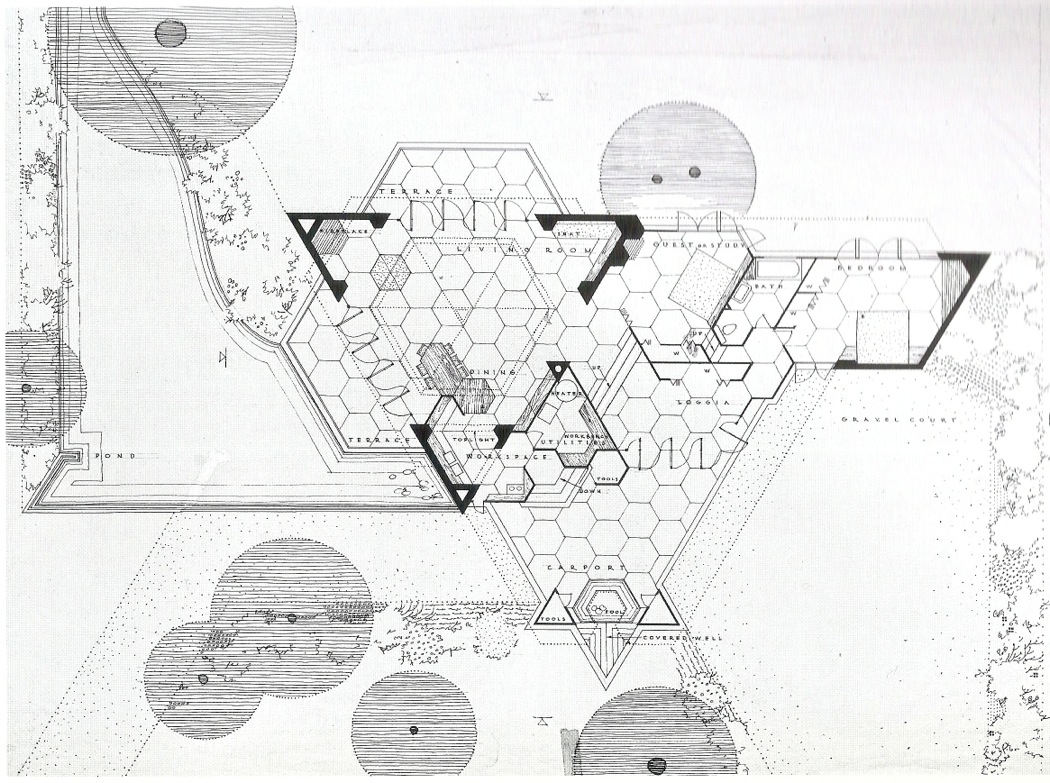 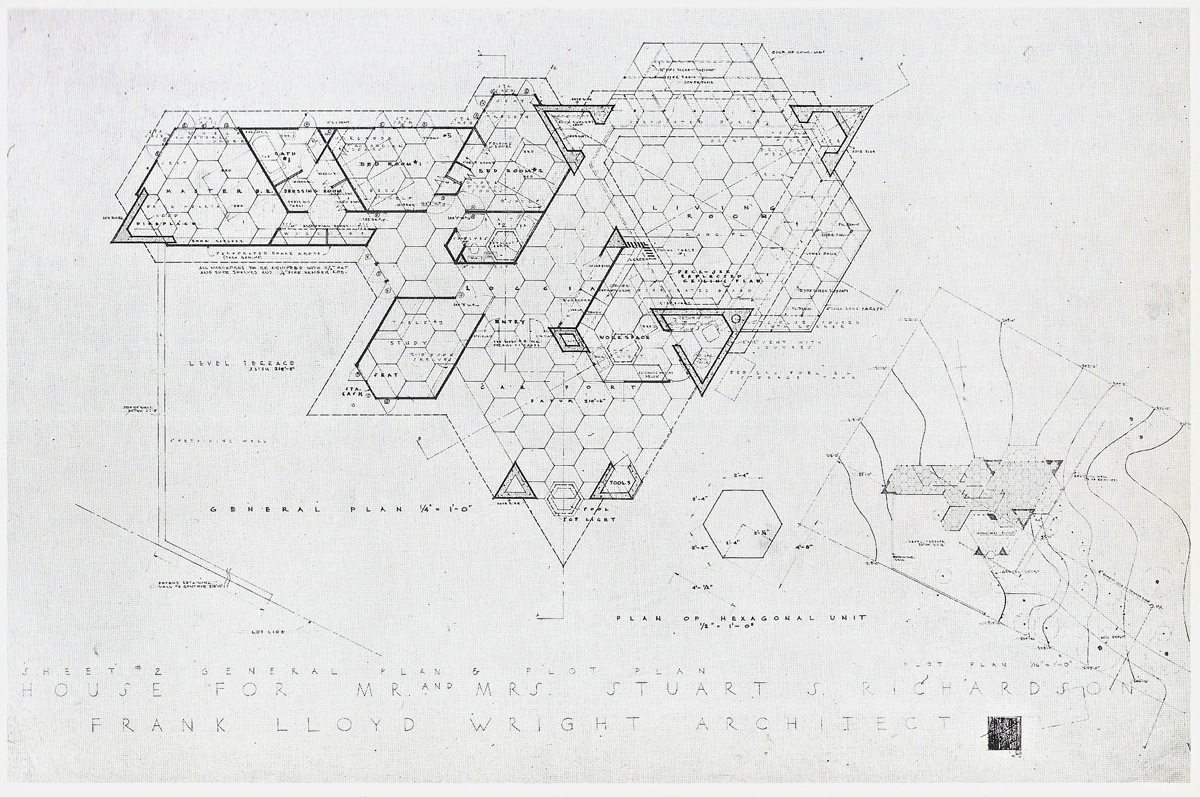 images Â© by the Frank Lloyd Wright Foundation
by SDR
I applaud, by the way, the five identical pyramid-shaded floor lamps in the Richardson living room, regardless of their indifferent standards, because of their unity. If it were mine, I'd lower the similar single shade over the dining table to the same elevation. This degree of continuity in residential lighting is so rare, and so right for Wright in particular.

SDR
by peterm
The series of floor and desk lamps does make one wonder why the typical soffit down lighting is not as present in this case. The extra lowered recessed brick portion of the fireplace is quite unusual. Could it have been a later addition?

Another wonderful, important Usonian house which appears to be in magnificent condition. Kudos to Tarantino and the owners!
by DRN
Christine and I had the pleasure of enjoying lunch at the Richardson house a few years ago with the house's current owner.
The house is in excellent condition and has been meticulously restored and maintained by its owner with consultation of the Tarantino Studio. The radiant heat system is less than 10 years old, having been completely removed and replaced with modern materials...the original white enameled steel kitchen has given way to the more Usonian kitchen seen in the photos....the white steel may have been at the center of BBP's comments. The house was constructed 10 years after initial design on a different, but quite nice, site. The carport was never used as such and was screened for use as a covered outdoor room...it sounds odd, but it works elegantly.

The Wright community owes the current owner, Mrs. Payne and her late husband, a debt of gratitude for their conscientious care of this house. This is a great one to buy if the location and finances work for the potential buyer.
by SDR
The screened carport shows in a couple of photos; it looks dandy to me, a flow of space through an opening out to another and more expansive cell of the plan . . .

SDR
by peterm
http://www.tarantinostudio.com/FLLW_Ric ... /Home.html
by Roderick Grant
The bedroom fireplace is an enlargement of what was intended. The plan shows the brick sidewalls extending beyond the face of the fireplace, which is not the case as-built. The living room fireplace also looks oddly un-Wright-like, as if the original opening was lowered.

The late John Payne was a very active, important member of FLWBC, a one-time head of the board. He was also a delightful gentleman, with more than a bit of claustrophobia. At a board meeting in Bartlesville, I rode up the Price Tower with him in one of those tiny elevators ... 4 of us in all. He became quite anxious. When he had to be evacuated from his bedroom by ambulance drivers, he had to be strapped in, tilted and squeezed down the hallway.
by peterm
I had also noticed and commented previously on this thread about the unusual living room fireplace. I seem to remember an older black and white photo of the living room in John Sergant's book, "Usonian Houses". My copy is in Iowa, so I can't see whether the fireplace has been altered since that photo was taken (1970s?)
Anyone?
by SDR
I'm looking at p 64 of Sergeant, and what's shown in the black-and-white photo of the living room is exactly what we see in the recent photos: six courses of brick below a rowlock course and another seven courses, inset as shown in the color photo.

I'll post the other photo, an exterior, because it shows various features that may or may not be shown on the elevations published in Mono 6, also exhibited. 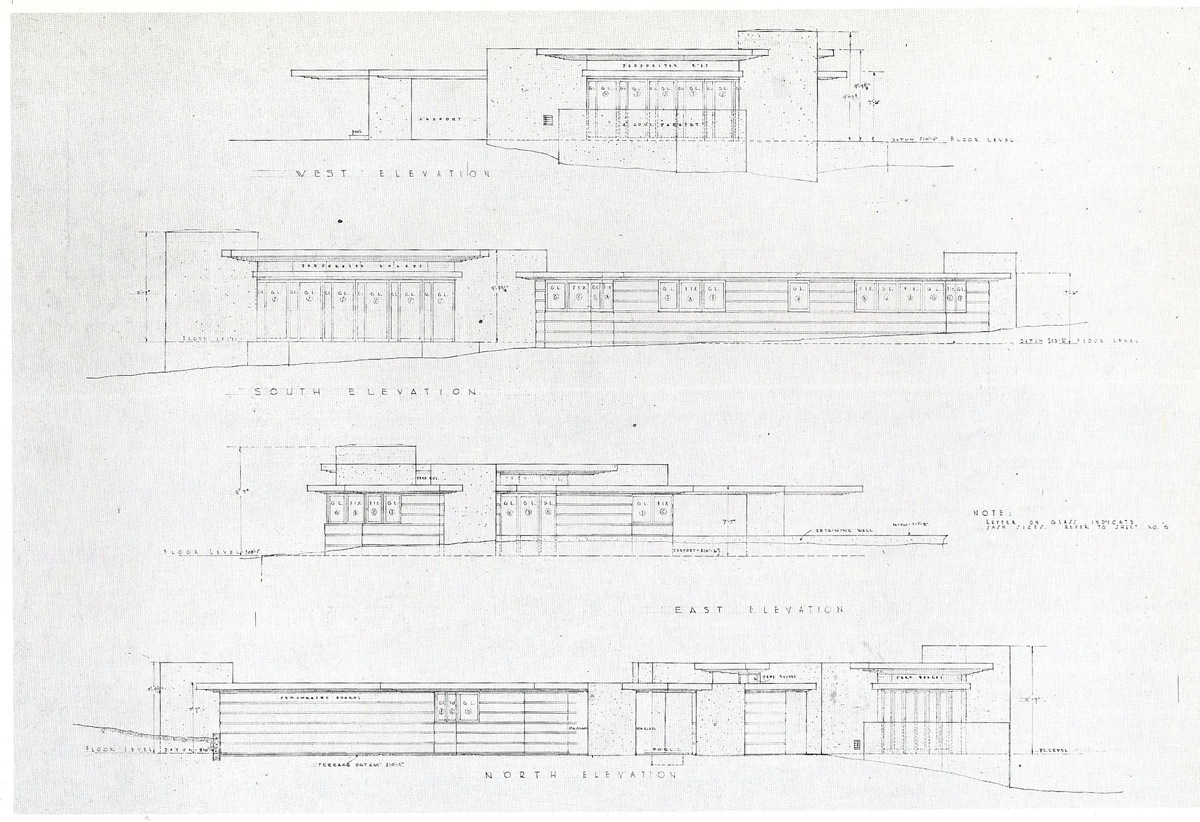 Â© 1976 by John Sergeant
by peterm
There is no soffit downlighting here, either. The book is from 1976, so we know that the fireplace was not recently modified.

Maybe that's what Wright designed? Or.. there were problems with the draw and the hood was lowered to remedy the situation?

In any case, it's an anomaly, isn't it? What makes me feel that there was a change is that the bedroom fireplace has the higher opening without the lower recessed brick portion. Maybe the bedroom fireplace was seldomly used and was not important enough to modify?
by Duncan
I visited with Mrs. Richardson in the house in the early '60s. One of her stories was that she and her husband insisted on a fireplace in the master bedroom against the advice of Mr. Wright. They got their wish. But Mr. Wright had the last word. They built a fire once. It was so hot they couldn't stay in the room. When I was there, there was a Navajo rug over the fireplace opening and they were storing Christmas ornaments in the fireplace.
All times are UTC-06:00
Page 1 of 2