Page 5 of 10
by JChoate
I love how clean that G-W front looks. I love many other Wright buildings for many other reasons, but I like the front and inside of G-W because of the economy of line. It's one of his few 'less is more' moments. (Our early Rosenbaum photo is another one.) An exercise of restraint for the old man.
If architecture is frozen music, as he said, then G-W is a small quartet rather than an orchestra. It's a palate cleaning scoop of sorbet between other various, more opulent courses he prepared.
by SDR
Yes, that makes sense. And the G-W plan is a perfect piece of frozen rhythm, too.

Rich, refined, asymmetrically balanced and modular, all at the same time . . . 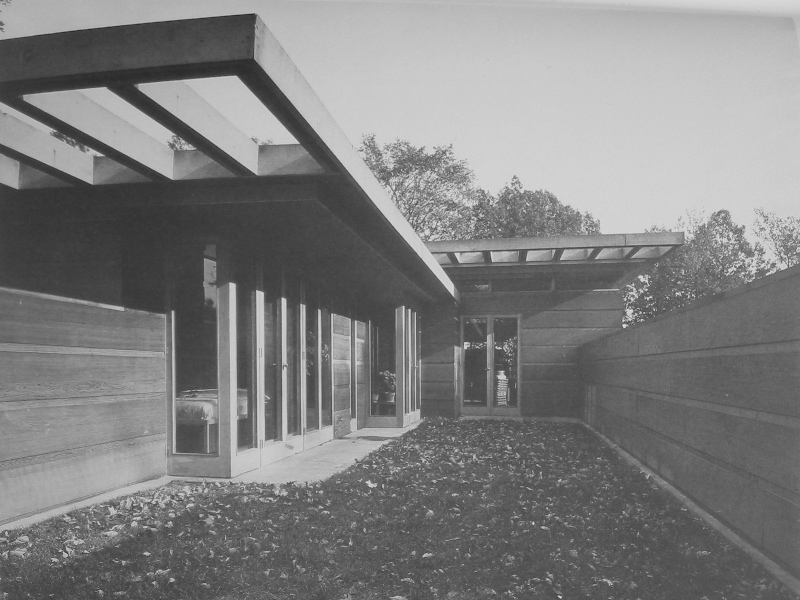 No wonder they call architecture "an old man's art" !

SDR
by JChoate
That's my second fav photo of G/W, after the Jaguar one.

That plan is exquisite in its simple refinement. Comfortable in its own skin. I just noticed there doesn't appear to be a door to the back bedroom. That's odd.
by SDR
Mr Wright might have pioneered the sliding closet door, here; did he ever employ them ?

SDR
by Tom
Choate points out a curiosity on the Rosenbaum clerestory 2Detail 3" scale drawing. He's right, the clerestory wall construction does appear to be a diaphragm.
Yet how, because that clerestory is another row of transom glass. The detail shows a solid wall up there if strictly interpreted. Yet that is in fact NOT the case.

Looking through the Leavenworth photos of G/W in Affordable Dreams:
There appears to be a continuous wooden header above the glass cleserstory transom course throughout the house that doesn't quite come through in
the section drawings.

(Won't post drawings of Rosenbaum again until Wednesday night.)
by SDR
The street-side clerestory is "blind"; the one facing the garden has the glass. (Is it a clerestory if there are no windows ? I suppose so. Transom implies glass . . .)

Quite right about the G-W photos showing header, vs G-W section drawings. But look at the SDS (standard detail sheet) on the previous page; at far left is the "lantern with perforated board," built under a 2x4 on edge, trimmed out to be even heftier that what appears in the G-W photos. Apparently all this stuff was fluid, subject to "refinement" ?

The ideal condition was glass to as near the ceiling plane as possible -- one of the major contributions to interiors by the modernists. With his glass-in-the-plaster detail Wright came closest, surely.

SDR
by Roderick Grant
Speaking of roof first, walls later, while that may have been tricky enough at Jacobs I and Rosenbaum with their flat roofs, imagine the challenge it posed at Hanna!
by Roderick Grant
Musically, I would suggest that G/W would be a piano solo by Erik Sate. Rosenbaum, perhaps a string quartet, or even a trio. Schumann. Robert, not William.
by JChoate
or maybe G/W is akin to Miles Davis (Kind of Blue)?
Rosenbaum to Thelonius Monk?
Melvin Maxwell Smith to Dave Brubeck?
by JimM
......and akin to Coltrane?
by JimM

Roderick Grant wrote:Speaking of roof first, walls later, while that may have been tricky enough at Jacobs I and Rosenbaum with their flat roofs, imagine the challenge it posed at Hanna!

It's just so -- stupid. Isn't it ? Can you think of one sound reason -- beside providing a covered place for the crew to eat their lunch ?

SDR
by SDR
I find nothing in the text of the Hannas' book which mentions the method of roof construction. The photo caption above might hint that delay in supply of the sash forced construction of the roof ahead of their delivery . . . ? The book is full of accounts of delays.

SDR
by JimM
John Sargent .... "Wright's preferred practice was to construct the roof first, supported by the brick masses and window-wall posts, then to insert the wall panels, which could be assembled off-site or under the shelter of the roof, a traditional practice of Japanese architecture."

Well, there's that influence again. Usonians were definitely unique, and shelving often served double duty to stiffen wobbly walls. The posts could be considered primary support for a good deal of the typical footprint due to the considerable floor to ceiling glazing. Don't know if this was always done, but I suppose there's some logic to it-at least in Wright's mind. Perhaps the concept was only used with the earliest Usonians and went by the way side along with the metal splines in the scored concrete at the base of walls. They caused quite a fit during the Hanna construction.

Curtis Besinger...." The house (Hanna) is essentially a roof poised above a two level, paved terrace on the side of the hill." Well there you are!
by Tom
It IS blind! Completely fooled by that. Completely and totally. As long as I've been looking at this house that fact never pierced through. So this raises the question ...why? Is Jacobs like that also?
All times are UTC-05:00
Page 5 of 10