Page 2 of 3
by SDR
Yes, it's hardly necessary to decide who invented the brick (for instance) -- or where it was first used. It's what you do with something that separates the men from the boys (as it were).

("Block that metaphor" . . . ?)
by Randolph C. Henning
Roderick - I'm curious. I see the Midway Gardens as a potential prototype for the knit block system, but where does the German Warehouse exhibit it (in the fourth floor poured-in-place concrete exterior wall ornamented aesthetic?)?
by jmcnally
German warehouse: 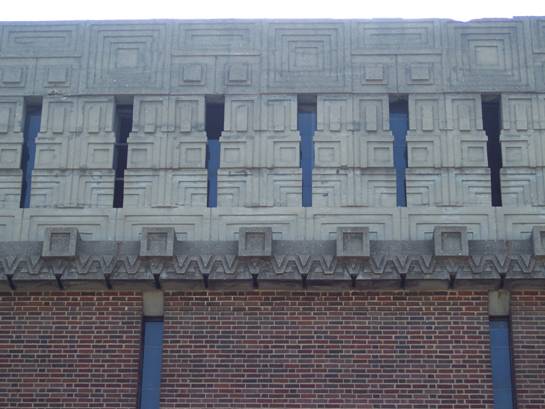 by Roderick Grant
I don't think that's poured in place, but if it is, I'm wrong. I'll have to check it out.
by Roderick Grant
Mono 4 refers to the decoration as "cast concrete," which could mean anything. Taschen calls it "concrete block." If it was made of block instead of poured concrete, those huge blocks must have been very heavy. I'll give a look at Margaret Scott's book on the building. She mentions the source of the design as deriving from the Mayan ruins at "Chicken Itza," but there might be some useful information, nevertheless.
by SDR
"Cast concrete," absent any qualifiers, means (to me) cast-in-place. That's what I've taken the top of the A D German warehouse to be --despite this caption in "In the Nature of Materials":

SDR
by Roderick Grant
Blocks or a single pour, the design is still a prototype for the block systems to come. The end result is visually indistinguishable from block. The design is sectioned off into a rectilinear grid that looks for all the world like the textile block grids of the 20s.
by SDR
Right -- with a strong hint of Mayan/Aztec imagery ?

SDR
by dkottum
We stopped at A.D. German Warehouse for a look in 1995 with our two youngsters, and Harvey Glanzer came from around back. He opened it up and insisted on giving us a tour. He told us about the construction indicating the decorative concrete was poured in place, showing us some molds used. They were simple boards nailed together, very crude looking, but produced excellent results.

doug k
by Tom
Nice discussion. The desert project for that right wing christian insurance guy owes a lot to this, particularly the inverted or tapering stacked blocks/negative space thing. Direct connection I'd say. Helps me to understand that project (both Warehouse and Christian Desert Compound)more profoundly than before. I think until now I'd always considered (or did not consider) the frieze on the German Warehouse as strange or somekind of aberration in the work.
by SDR
And I had missed the connection to the textile blocks -- so we have all profited from the discussion !


SDR
by Roderick Grant
Re-Scully, I had never had an opinion about "smarty-pants" until he gave a lecture at a FLWBC Conference in Chicago, in the Auditorium. The sobriquet fits. More telling than his Chichen Itza connection (which has merit) is his attempt to connect FLW's Oak Park House with the Kent House by Bruce Price in Tuxedo Park.

I also stopped by German in 1995 (after a TF affair at Taliesin), but got caught in such a torrential downpour that the streets became rapids. I couldn't get the car any closer than about quarter of a block, but got a good view of the front. I feared that if I got out and tried to wade across the street, I might flow down the tributary and end up in New Orleans, such was the rain.
by SDR
It's heart-warming to see such a great block of masonry, withstanding time and tide. I think it might be even more so, in a driving rain . . . ?


S
by Randolph C. Henning
It is unquestionably poured-in-place concrete (aka cast concrete). I did my Masters thesis on the building and have been through every square inch of it, so, please, believe me.
by SDR
So, the architect's caption in In the Nature of Materials (putatively authored by Hitchcock, but overseen -- and designed by -- Wright) is a least a bit misleading . . . I guess.