You agree not to post any abusive, obscene, vulgar, slanderous, hateful, threatening, *-oriented or any other material that may violate any applicable laws. Doing so may lead to you being immediately and permanently banned (and your service provider being informed). The IP address of all posts is recorded to aid in enforcing these conditions. You agree that the webmaster, administrator and moderators of this forum have the right to remove, edit, move or close any topic at any time they see fit.
Post Reply
1372 posts

Cool, thanks
I guess IÃ¢â‚¬â„¢m thinking of catalog order as only alternative
Still, IÃ¢â‚¬â„¢m surprised.
Always assumed most of the windows and doors on Wright houses were
Built on site.
Top

I believe the issue may be better described as the increased prevalence, as the 20th Century progressed, of standardized window sizing by larger and fewer shops, and later, by major manufacturers. Wright, for the most part, specified his window profiles, proportions, and sizes which were fabricated at local shops and brought to the site, often, but not always unglazed.

The early 20th Century "house by mail" business, aided by assembly line methods and a vast railroad network, led to standardization. Wright's ASBH's were an outgrowth of that trend, but retained Wright's unique details and proportions, though Wright did tailor his ASBH designs to interchangeability of many components between plan types. Bespoke houses by architects such as Wright became the holdouts as it were for custom windows. WrightÃ¢â‚¬â„¢s work on the prefabs with Marshall Erdman was I believe his first foray into standardized windows and doors from a major manufacturer....in fact, it could be said Wright used them as a generative design element for the prefabs.
Last edited by DRN on Thu Jun 07, 2018 9:21 am, edited 2 times in total.
Top

No doubt true. The Erdman II design is surely based on the size of available sash; the vertical module appears to be 2 feet, on a four-foot square grid.

The Erdman Prefab #2 elevations do not call out the vertical unit; an interior photo makes clear the two-foot unit.

Heh. Mr Wright has it both ways, with that title on both later Erdman sheets. One thinks of the advertising trope of "hand made" -- as if most objects from the hand of man could be anything other than hand-made . . .

Another factor in the complexity of Wrights details is that the cost of skilled labor was very cheap through the 1930s. I don't see this as an excuse to make things overly complex, but you could have complex woodworking done for a few bucks an hour in labor cost.

I have always thought Wright should have operated his own pre-fab factory. But it should have been a panel system where wall panels (some with windows) would have been factory made and trucked to a site. Wright's idea of prefab was a smaller unit module, as in the Usonian Automatics use of a block. But that really is too small a module to be an effective prefab system. Likewise, some current systems make entire rooms in the factory and truck them to the site for assembly. That, in my opinion, is too big a module. The ideal module would be a wall SIP panel, about the size of a piece of plywood.
Top

That sounds about right. There is a photo of a wall section of a board-and-batten Usonian being removed from a truck. The issue there is that Wright's
preferred mitered vertical corner does not take kindly to being prefabricated -- unless the panel can be assembled and then mitered (on the world's largest
sliding horizontal panel saw ?) as a unit, making a perfect miter from top to bottom.

Now that this thread comes up again I wanted to ask you something. 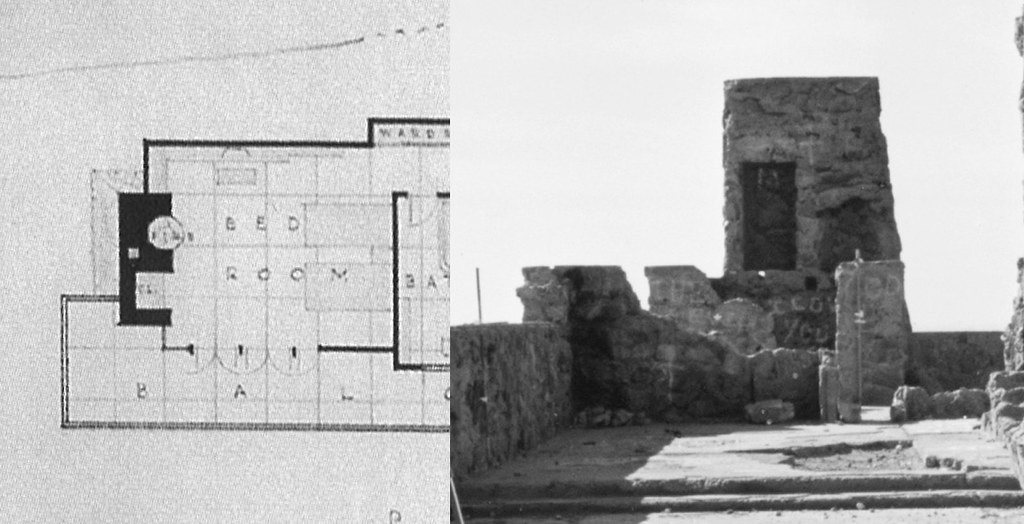 Never noticed that window before.
Will keep my eye open for closer shots.
It seems it might consist of triangles:
two light pointing up and one dark pointing down
Top

Considering the height of the cabinet next to the circular fireplace, I doubt the entire thing was meant to hold fire wood. Possibly the bottom third or so, but it is a full-height closet.

Adding a window at the last minute wouldn't be out of the ordinary, especially if it was to provide for cross-ventilation.
Top


Again thank you, I will take you up on that offer if higher resolution of any of your posted content is needed.
Top 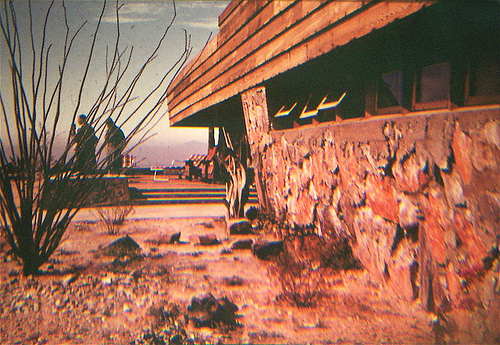 or at least was taken at the same day as the video was shot.
Top
Post Reply
1372 posts