You agree not to post any abusive, obscene, vulgar, slanderous, hateful, threatening, *-oriented or any other material that may violate any applicable laws. Doing so may lead to you being immediately and permanently banned (and your service provider being informed). The IP address of all posts is recorded to aid in enforcing these conditions. You agree that the webmaster, administrator and moderators of this forum have the right to remove, edit, move or close any topic at any time they see fit.
Post Reply
19 posts

The first plan shows the carpet almost as executed, with only minor differences. The fireplace and moat around it are significantly larger than as-built. The outline of the couches is close to the blueprint that the Lovnesses had, and which I saw in 1984, but which differed enough so that it was useless as a research source for as-built. Notice also that the alcove at the SE corner of the living room (south being at the top of the drawing) leads into the library, just as the NE opening to the music room does. This is contrary to the way the house was built. Who determined that the library should be walled off at that point, with a standard door added to the hallway along the east side of the library, no one knows, but I strongly suspect it was FLW, himself, to emphasize the focus of attention on the fireplace.

The elevation in the second drawing is an original FLW concept that had yet to incorporate the large trays at the top, which cast light upon the ceiling, and which may or may not have been added by RMS. The fireplace is markedly smaller than in the other drawing,, though still larger than built, while the moat is not there at all. That places the drawing earlier than RMS' involvement. The corners of the seats turn slightly, amplifying the octagonal nature of the composition, but they were not executed that way; the complexity of getting that detail built and upholstered probably made eliminating it wise.
Top

SDR wrote: ↑
Sun Mar 07, 2021 10:51 pm
Mr Wright designed no free-standing desks for his Usonian homes, as far as I know, but the typical Usonian bedroom included a built-in desk. Likewise, while most of these homes had free-standing tables of various heights and sizes, the dining table was built in virtually always---sometimes in the form of a stub or minimal table onto which matching additions could be placed as needed.

Combo pieces, however, are not common in any period of the career. Here's an interesting exception, at the 1915 Emil Bach house:

The Irving combination piece shown above, and the Robie living-room couch with table-arms, were designed by George Mann Niedecken after Wright left for Europe. Another major work of furnitecture, at Hollyhock House, was presumably drawn by Wright; Roderick Grant or Stan Ecklund can enlighten us there, I'm sure.

yeah, combo pieces are not common. I love that kind of Bach's desk-table. It's a precursor of this interesting kind of furniture maybe but as I tell you It would be nice to see this combo furniture with the simplicity and geometries of the usonian period.
Top

Roderick Grant wrote: ↑
Mon Mar 08, 2021 10:45 am
Built-ins for Usonian houses, as opposed to similarly functioning free-standing units for Prairie houses, undoubtedly came about because of the diminutive size of most of those houses, especially the Jacobs I House and its progeny.

The Hollyhock units had a tortuous evolution, as did so much of the house and its details. The basic design came from FLW, was worked over by RMS, adjusted in its details by the manufacturer and edited by Aline's parsimony (6 light fixtures were deleted from the design). It was not unlike the process FLW used in his relationship with Niedecken, who tended to soften FLW's designs. 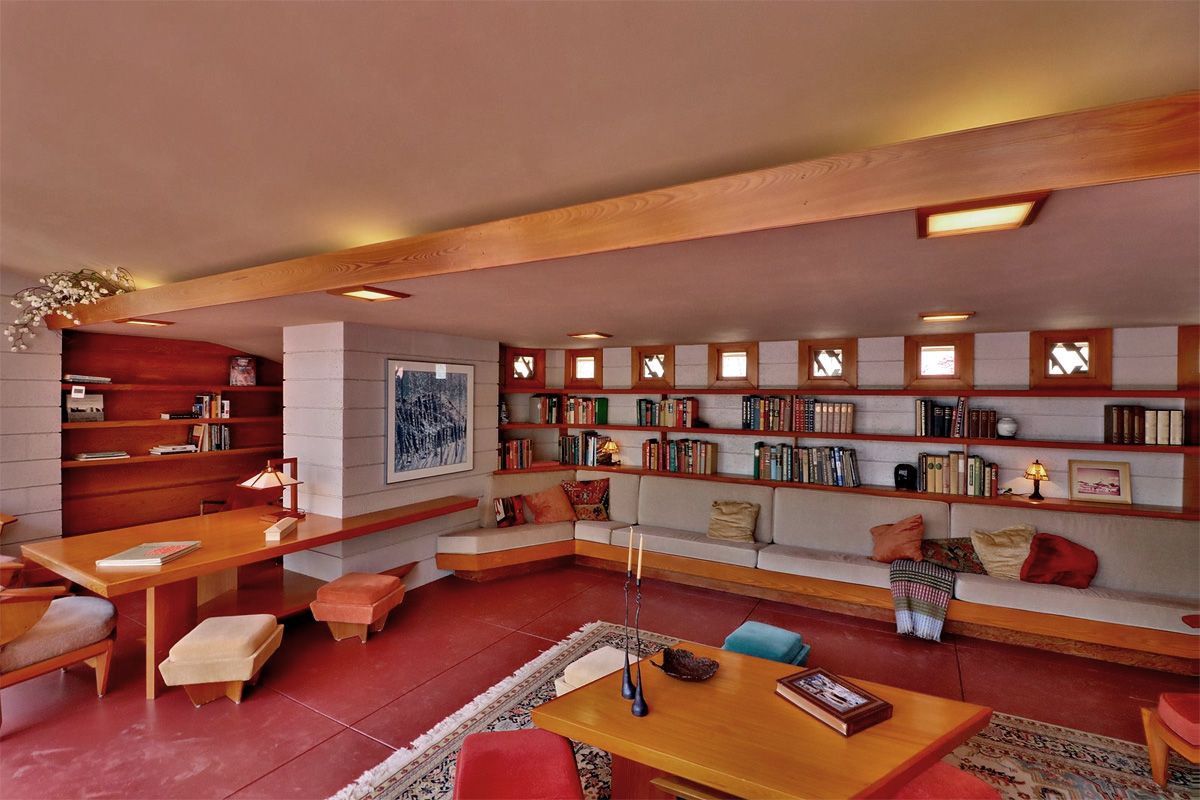