You agree not to post any abusive, obscene, vulgar, slanderous, hateful, threatening, *-oriented or any other material that may violate any applicable laws. Doing so may lead to you being immediately and permanently banned (and your service provider being informed). The IP address of all posts is recorded to aid in enforcing these conditions. You agree that the webmaster, administrator and moderators of this forum have the right to remove, edit, move or close any topic at any time they see fit.
Post Reply
14 posts • Page 1 of 1

This was one of the major highlights of the 2019 Los Angeles conference. Romano understands what he has, and the house sings because of his stewardship.

Bravo. Here's a supplement to the linked article, by the same author, with a few additional photos.

But drawings are almost non-existent in print; below is the relevant page in David Gebhard (1980). Gebhard dispatches the important Walker house in one sentence:

"The street front of the Walker house, with its simple rectangular shape and row of strip windows under the eaves, is International Style in feeling, while the rear of the house with its eight supporting concrete piers, horizontal trellis, deck and roof is completely Schindleresque de Stijl."

The piece that Peter linked is sort of a miracle, presenting the facts of the house, with a bit more than previously published, along with a most affecting personal account of an affair with the architect. And the photos do the house, and Schindler, and the author full justice; clearly the love affair has resulted in excellent "care and repair" of the building. What a pleasure . . .

I would fight for the chance to reproduce the Walker/Bigelman dining furniture.

Some Schindler rendered views. Like Neutra and Wright, RMS demonstrated remarkable skill as an illustrator
of his own work.

Mr. Romano posted recently about the 'Anna Olga Zacsek' beach house that Schindler did.... I'd never seen it before; a great little design done in the late 30's that later got torn down for the airport. 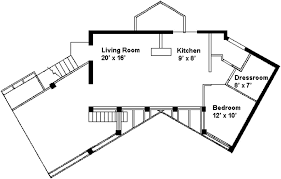 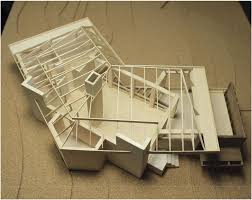 The Olga Zaczek House is in "RM Schindler, Composition and Construction" (Academy Editions, 1995, page 257), and Judith Sheine"s book "R. M. Schindler, Works and Projects" (1998, page 160), a chronological list of all RMS' work. It is not in many others that I can find.

Another house that has had little exposure is the Armon House (1947) which I have found in "2G," a Spanish publication, pages 110-5, and Sheine, pp 210-3. It isn't even listed in the Winter/Gebhard book, so I don't know the address. It is a splendid little house with a rental unit tucked beneath it on a steep slope somewhere on Mount Washington.

Often small buildings get overlooked, but it is a measure of excellence when an architect can take a limited budget and produce a tiny gem, like Zaczek or Armon. Another RMS project of 4 duplex structures for OS Floren has also not been given its due, because, as rental units, the budget was low. McCoy gave it short shrift, while Gebhard published an exterior shot, but no plans or interiors. The RMS archive at UCSB doesn't have anything, either. They are, however, wonderful buildings that, by RMS's genius look much more high end than the budget allowed.
Top

Thanks for reminding me of the best Zacsek plan (Gebhard spells it with two Zs, the architect with one):

As for my relationship with the Walker House, “love affair” is probably too mild a word for it.

Happy to answer any questions you might have and/or share any materials I might have. I have a lot: full plans, drawings of specific built-ins, unpublished photos, original receipts, etc. Someone in Wisconsin recently found me and sent the only non-Shulman photos I’ve seen of the house when the Walkers still lived in it.

A good place to start may be the Instagram account where I’ve been documenting the house’s past and present for the last few years: @the_walker_house. It’s private, but just request to follow and I’ll approve.

I could go on all day, but two quick things that might be of interest:

1) The city recently approved our application for Mills Act tax benefits. We were the only residential building in the city approved for an exemption this year. (Any house worth more than $1.5 million needs an exemption.) This means we will finally have the money to slowly but properly restore the house.

2) I’m remaking the original dining set and chairs. They should be done soon. I was lucky enough to find an original Bigelman chair to model ours on. As best I can tell, the original Walker set was sold at auction c. 1985 after the third owner declined to buy all of the original furniture from the second owner for $2,400. It hasn’t been seen since.
Top

Welcome, Anthony; it's a great pleasure to have you aboard. Thanks for your generous offers !

Others will have many questions, I'm sure. Peter M, former resident of the greater Los Angeles area and now owner of the Jack Lamberson Usonian in Oskaloosa, is a particular devotee of R M Schindler, as am I.

I will be most interested to see the Walker dining-room furniture when it is complete. One of the more interesting aspects of these pieces, aside from the unique cantilevering, is the treatment of the bases, which appear to have been carpeted, presumably to match the wall-to-wall carpet in the house when new. Did the Bigelman chair have evidence of this carpeting as well ?

I have pondered whether that detail is semi-extraneous to the design of the chair---a delightful fillip, if you will, one intended to reinforce the impression, at first glance, that the furniture grows from the floor. What is your take on that aspect of these iconic and too-little-known pieces ?

I will be most interested to see the dining set as well! It’s taken us more than a year to figure everything out.

People are fascinated by the carpeted bases. Usually they shake their heads and dismiss it as a silly trick. I’ve heard a few comparisons to cat climbing structures.

After spending a lot of time with these bases — both the Bigelman example and our own solution — I have a theory about their origin.

The bases are actually very difficult to construct by hand. The prototype of this design was the dining set for the Oliver House. The original table is still there; the base was glued up and then the radius was gradually carved away. It looks somewhat rough.

I believe Schindler embraced the addition of “floor covering” — that’s how it’s specified on the Bigelman drawing — as a way to both conceal this roughness *and* create an interesting effect of unity with the floor plane.

Another bit of evidence to support this theory: the Bigelman chairs of 1944 were made much later than the other examples of this design (Oliver, Stander, Van Patten, Walker — all from the mid-1930s) and to fabricate them, Schindler did not turn to his usual tradesmen. Instead he went to Manuel Sandoval, the Taliesin-trained master woodworker who built the Kauffman office and VC Morris furniture for Wright and who later worked with Alvin Lustig in LA and the Langhorsts up in SF.

I have copies of the correspondence between Sandoval and Schindler. I believe Schindler went to Sandoval to get the bases right. It apparently took much longer and cost more money than expected. Things got heated. Eventually the chairs were delivered. There is no sign that the bases were ever carpeted. They are lovely (although still somewhat jury-rigged, with the various pieces of wood visible).

Unfortunately, we no longer have access to Manuel Sandoval, and the bases presented us with problems at first. Then I realized I know an architect-turned-woodworker who owns a giant 1942 Oliver 102 pattern mill. We glued up some ash (the wood specified on the drawings) and he milled it to perfection.

The bases look amazing. We won’t be covering them with carpet.

It is an interesting case; The Bigelman chair drawing (March and Sheine, 1993, p 206) is the only one I've seen, and it is remarkably unhelpful as to the construction of the base. For once, Schindler abandons his usually-clear and logical constructivism in favor of a sculptural effect, without a clue as to method (or material) of construction. I would have thought some buried steel would be necessary. The upholstered seat and back panels are remarkably svelte, aren't they . . .

I see that the Van Patten table (Berns, 1997, p 120) has tapered members beneath the top, broad enough at their junction with the (doubled ?) spine to be reliable. Too bad we can't see how the base of that table was made---though I guess you've see it ? I would have expected RMS to have made a simple tapered base member, similarly wedded to the spine, rather than one with uncharacteristic curved surfaces. But, where the inventor leads, we must follow . . .!

Congratulations on all you've accomplished ! The photos of the house look smashing. We smile with pleasure at a remarkable transformation, lovingly made.

S
"As a former copy editor, I always feel I am defending the person whose name is being misspelled, not attacking the person who misspells it." Ronald Alan McCrea (1943-2019)
Top
Post Reply
14 posts • Page 1 of 1