by David
Once a work of art is finished it is difficult to imagine that at some point in history it could have been different.

Reading this article, it is interesting to know that the Guggenheim was not always the bright white color with which we can observe it today, the original color used to be beige, and after the addition of the building that was made in 1992 they decided to change the color of the faÃƒÂ§ade (a decision that is not very respectful with the author of the work, I must say):

I have not found quality color photographs prior to 1992 but doing a little simulation with Photoshop, it should be something like this: 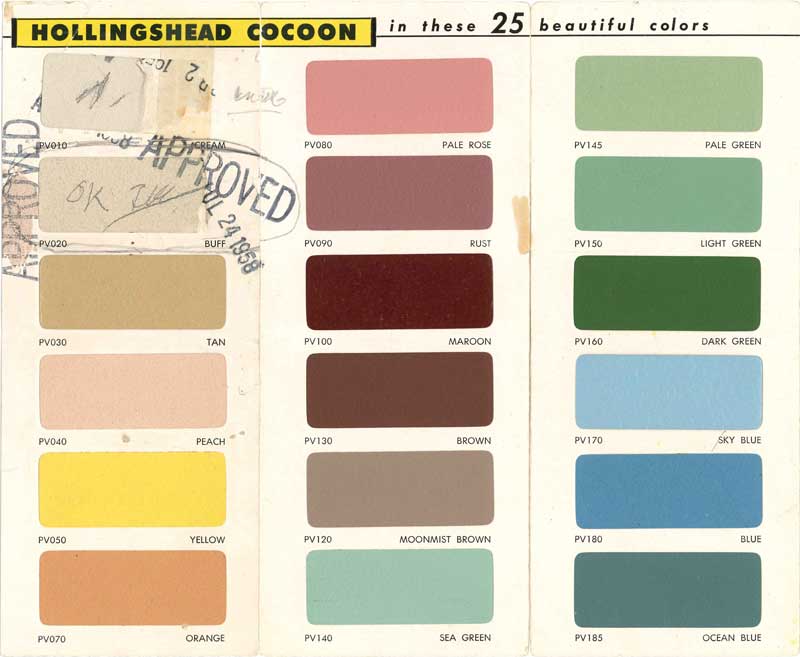 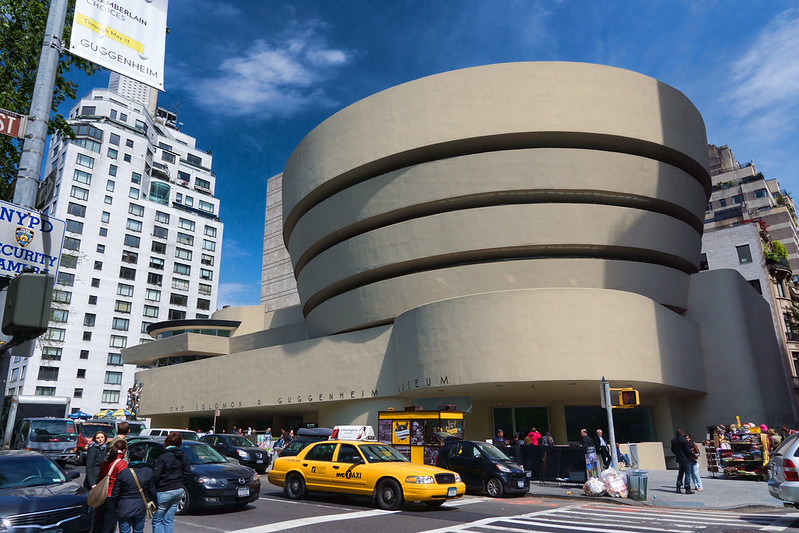 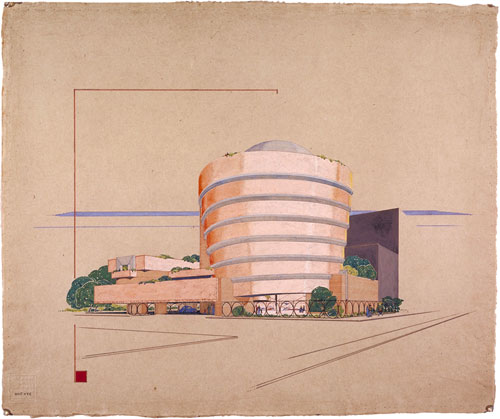 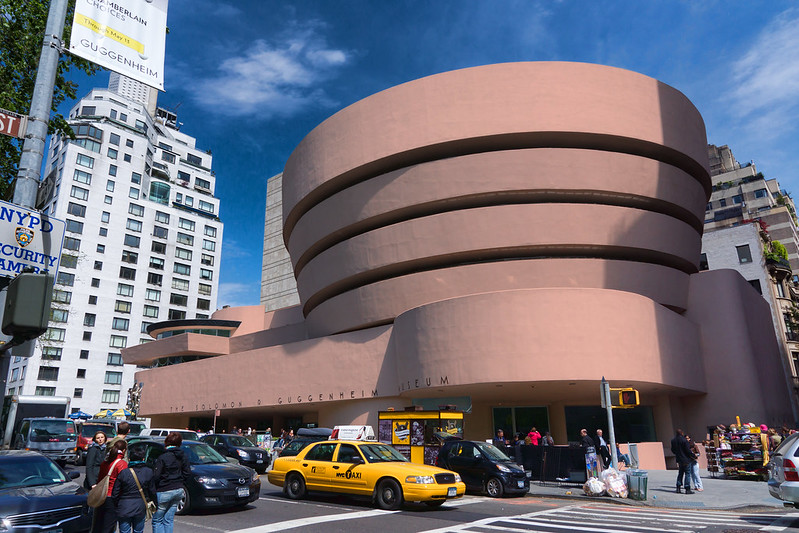 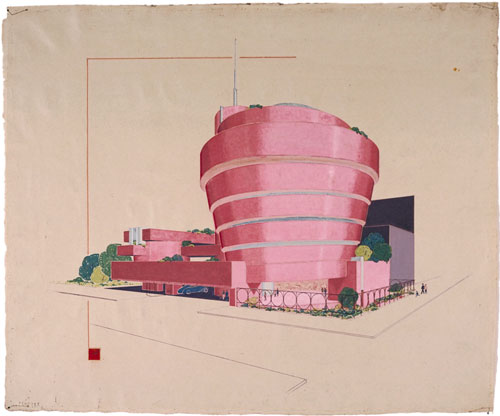 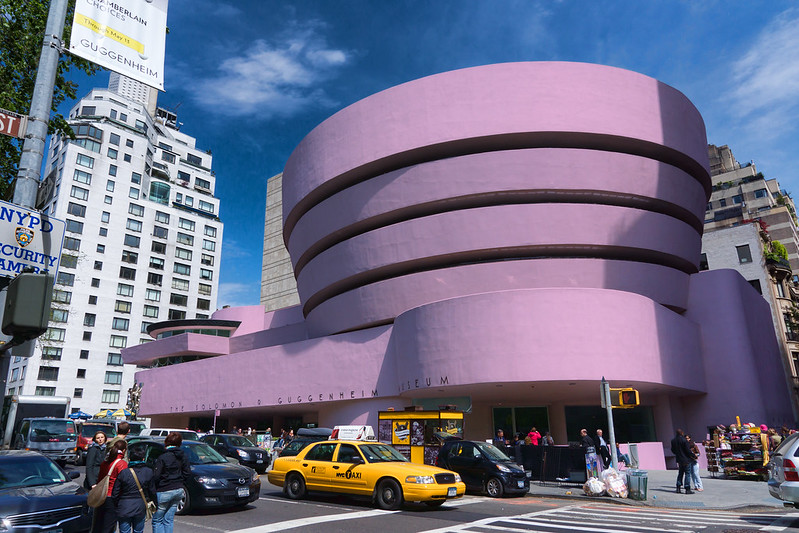 by SDR
That is fun, and entirely harmless. Color is everything---after light itself ?

Having seen the Guggenheim when new, I have a reference, and I have managed to find photos that I believe reflect the original color, which I would have called "sand." It's a warmer and lighter in value than your recreation above.

(We can remind ourselves that the color chart above may have been altered slightly, unintentionally, in the necessary transmission through various media ?)

I too believe it was a remarkable fault to choose a different color for the building, either in the 'nineties or more recently, following the restoration. I just can't imagine how that decision was reached. The cold gray-white color is . . . pick your adjective. Thoughtless, as I see it. 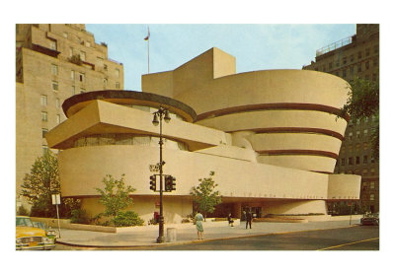 by JChoate
Thanks for sharing that photo S. It's marvelous. Look at it sitting next to this snapshot I took.

S
by DRN
I call this photo of Wright standing on the Ã¢â‚¬Å“monitorÃ¢â‚¬Â� balcony as the rotunda is being painted the original warm color Ã¢â‚¬Å“the smoking gunÃ¢â‚¬Â� proof of what WrightÃ¢â‚¬â„¢s intentions were for the museumÃ¢â‚¬â„¢s exterior.

My only question is, was the exterior color ever applied to the interior? Was it the curatorÃ¢â‚¬â„¢s preference for Ã¢â‚¬Å“modern museum whiteÃ¢â‚¬Â� on the interior which led to the exterior being repainted to match? WrightÃ¢â‚¬â„¢s painted masonry or concrete buildings, at least to my eye, appeared to be painted a consistent color over both the interior and exterior. Was the exterior color change an effort to have the interior and exterior colors of the monolithic structure match?
by SDR
There were two controversies about the interior of the museum, before it opened: director James Sweeney's insistence that paintings should be
exhibited vertically rather than leaning back against the curving walls ("as they are when on the artist's easel," I believe Wright said)---and that the
interior surfaces should be white and not the (exterior) sand color Wright specified. Wright lost both of those arguments, as it turned out; special
brackets were made to support the paintings vertically and away from the walls, and those walls were white when the museum opened.

Oddly, none of this history appears readily to an online searcher. The exterior color remained as original for decades, however, and I don't recall
that particular argument being used in defense of the alteration when it finally occurred . . .

S
by David
It's a shame, the original color was exquisite and consistent with the palette of earthy tones that Wright habitually used 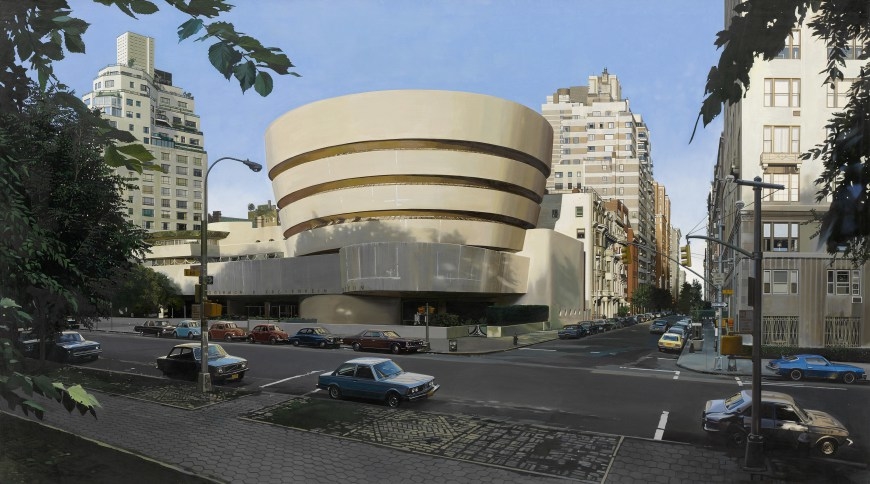 by Roderick Grant
SDR, that is what I recall about the color controversy as well. I may be wrong about the source, but it could be in the biography of Hilla Rebay. I'll have to dig that up.

James Sweeney may have won both arguments, but he was wrong on both counts.
by SDR
I wish I could agree. An issue associated with the leaning-vs-erect problem is the lighting of the art; didn't Wright intend for natural light to fall on the paintings, in his vision of the display ?
If so, what would be the effect of that---both aesthetically and from a conservation point of view ?

Do you recall---or is there evidence---that the ramp parapet was painted to match the exterior, at least at the beginning ? I don't recall, though I was there for one of the Artists' Openings. If so, when would that have bitten the dust ?

As to the controversies, they were a hot issue at the time and would have received plentiful coverage in the press. I find it odd---disturbing, even---that there is so little that comes to hand now.

S
by Roderick Grant
The community of artists (if ever there was such a thing) were irate with the building before it was built. The white environment was a huge thing to them, afraid, apparently, that their contributions would be overshadowed if the walls exhibited even a hint of any other color.

The perimeter lights were always there, so whether the paintings were vertical or leaning, it wouldn't matter much. Since the walls are curved, even an "easel" configuration would have put the painting somewhat away from the wall. I think those lights were meant simply to mitigate shadows in the display alcoves. What is aggravating is that Sweeney did not even give the idea a try. He might have come around.
by SDR
It would be self-evident to any artist that context (i.e., framing, lighting, background color) would have a direct and meaningful effect on perception of
his work. I chalk it up to Wright's notorious if only occasional ignorance (ignoring) of client requirements in favor of his own vision . . . all arts but his
own being of lesser importance, in the grand scheme of things.

There really are times when we must defer to someone other than Wright---even on these pages.

S
by Roderick Grant
I disagree. The environment beyond the edge of the canvas does not have to be framed, lit or colored in a particular way. Look at the habit of many of the Impressionists who framed their modern images in age-old, florid, gilded frames, or paintings that reside comfortably in private homes with no museum control over the environment at all. It is neither self-evident nor necessary.

It could be argued that Guggenheim shattered that notion for all time. Museums today take on all sorts of configurations without damaging the art on display. For that matter, the background of museums going back to the original (Louvre) were not obliterated by white paint.
by SDR
Ask your painter friends about that . . . !

S
by Roderick Grant
Basically, what your test implies is that if colors are adjacent or overlapping, as opposed to near one another, the quality of the colors might be affected. But if you have Van Gogh's "Sunflowers" encased in a gold frame, set on a puce background, that is quite different. The sunflowers shine unimpaired. If the puce bleeds into the garden, there might be a problem.

If the lighting is fluorescent, the artwork would be affected more than if it was incandescent, so lighting a museum properly is essential. Note that Guggenheim uses (or used) fluorescent lights. Sunlight is best, as long as it does not cast UV rays directly on the art.

Lighting is crucial, and I suppose museums take more care in that regard than ever. Of course, there is more than one color of fluorescent light, too . . .