If Susan Lawrence Dana paid for the "north wing" I guess that refers to the two galleries (Dana & Roberts) and the connecting bridge/gallery ... not the drafting studio. I hadn't realized the drafting studio was a later addition to those two rooms (if built earlier, when?), but in Jack Howe's photos of the studio's construction it looks like we can see the "north wing" already in place as the studio trusses are being erected (I hope these links to the Wisconsin Historical Society work, sometimes they're glitchy):

This announcement in 1934 is interesting, after reading this excerpt from a blog about Susan Lawrence Dana discussing Wright & Dana's correspondence in 1933:

(This webpage is very loooong, so I'll paste this excerpt in case the link doesn't go to the right place):
https://susanandme.wordpress.com/page/10/ 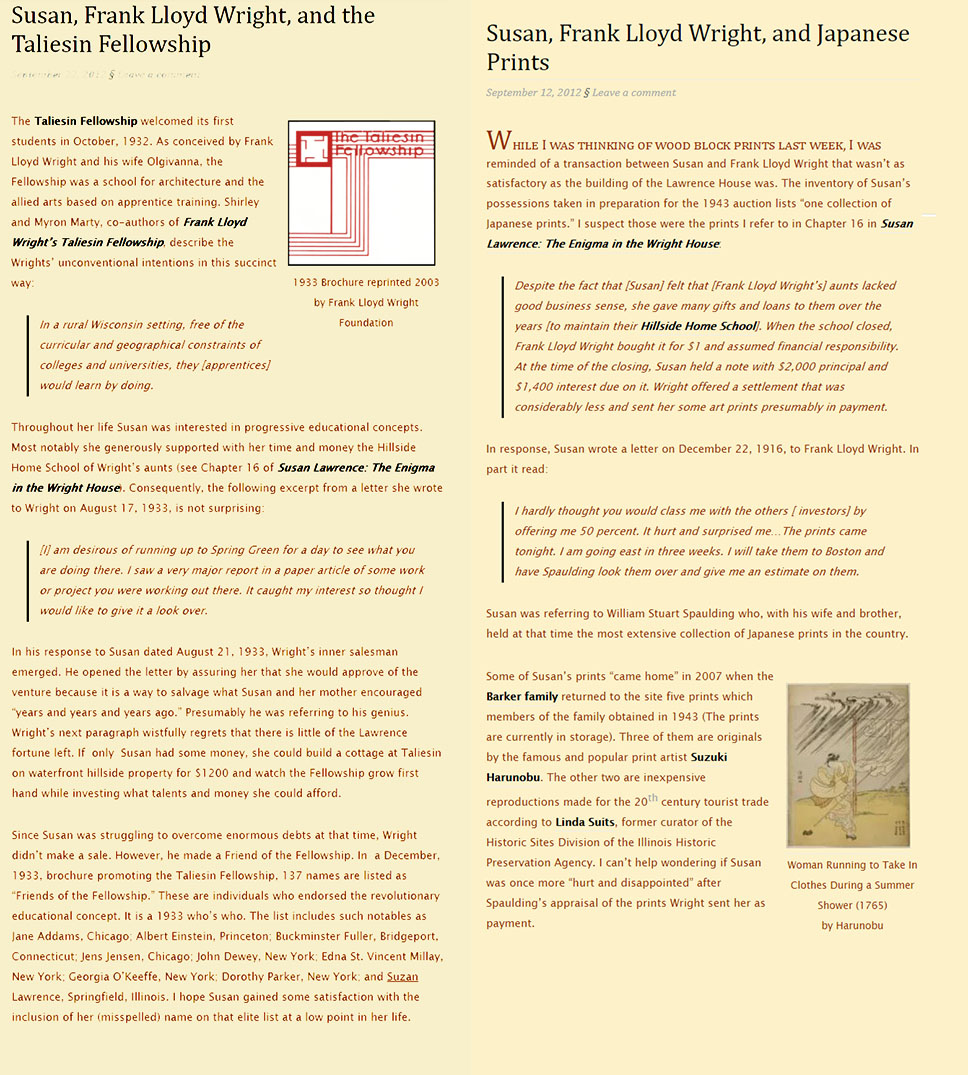 by JimM
Appreciate the correction regarding "Isabel"... odd error for an otherwise well researched book (?)

by pmahoney
The only reason I was aware of Roberts history was that I included a chapter on her and her house in my 2011 book on the Robert's cousin house in Buffalo (Walter V. Davidson).

I did a brief family tree on Roberts to provide some of that information.
by JChoate
The AT TALIESIN article announced the naming of the Dana and Roberts Rooms in their article dated July 12, 1934.
According to Wikipedia, Roberts had died just a few months earlier in March 1934. Perhaps Wright was touched by his passing, and that immediate timing factored into the naming (?).

Also, they report that Roberts was related to Harlan Bradley from Kankakee.

If Susan Lawrence Dana paid for the "north wing" I guess that refers to the two galleries (Dana & Roberts) and the connecting bridge/gallery ... not the drafting studio. I hadn't realized the drafting studio was a later addition to those two rooms (if built earlier, when?)

Yes. The two classrooms were completed in 1903 as part of the Hillside Home School construction for aunts Jennie & Nell.

The Drafting Studio was begun in 1932 & the Fellowship put a lot of work into it right in the beginning, but couldn't quite get it done. They kept working on it over the years, always with the feeling that they were finishing shortly, but didn't get the finish floor until Nov. 1938. They moved in the next summer after they got back from Arizona.

You can see the room with the unfinished flooring in the January 1938 Architectural Forum magazine issue devoted to Wright.
by JChoate
Thanks SpringGreen for clarifying the timeline.

I just looked at Monograph #11 and see where Pfeiffer also explained it: 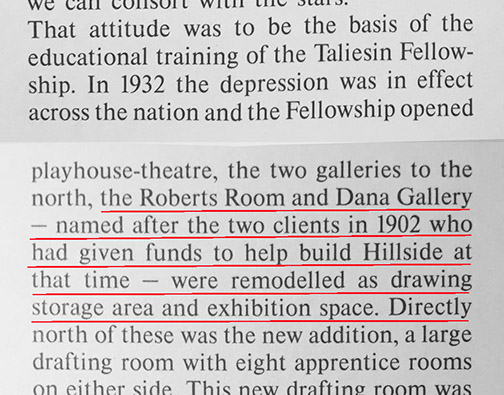 In Monograph #11, the text above describes the two rooms functioning as "drawing storage and exhibition space". Additionally, there are a number of drawings where FLW was working out his the Hillside plans, consistently reflecting the location of the Dana Gallery & Roberts Room. In the first one, they are both simply labeled "Gallery": 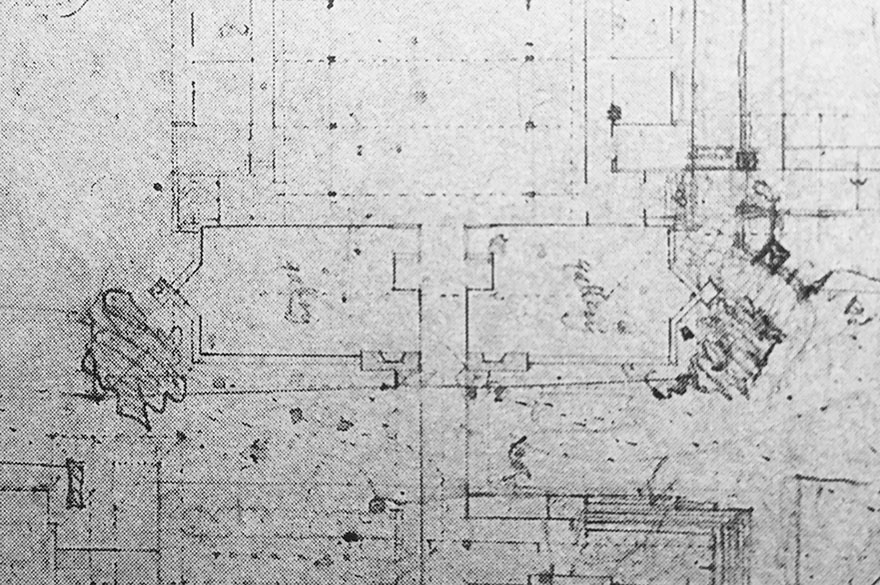 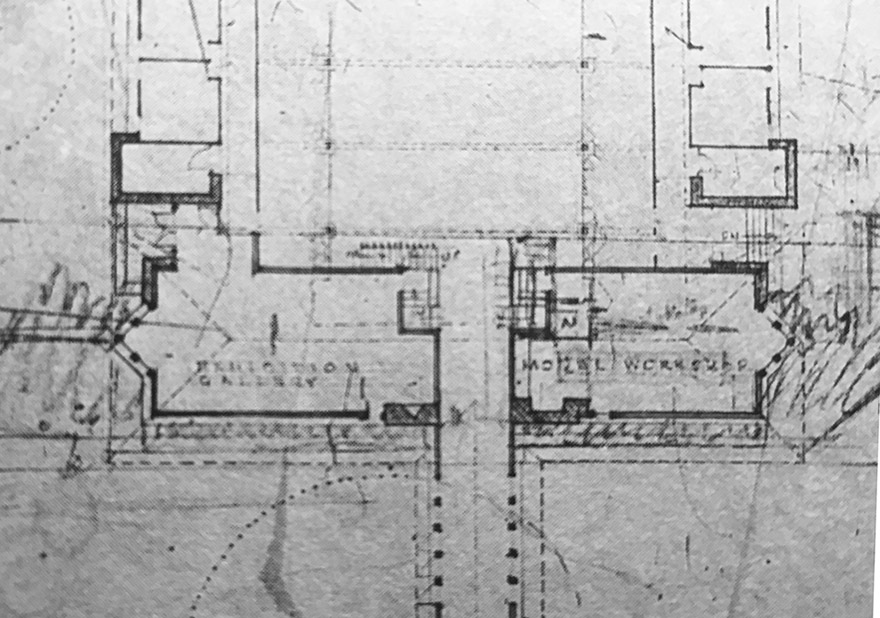 Two other plans exist where the spaces are labeled "Sculpture" & "Painting", with those positions switched: 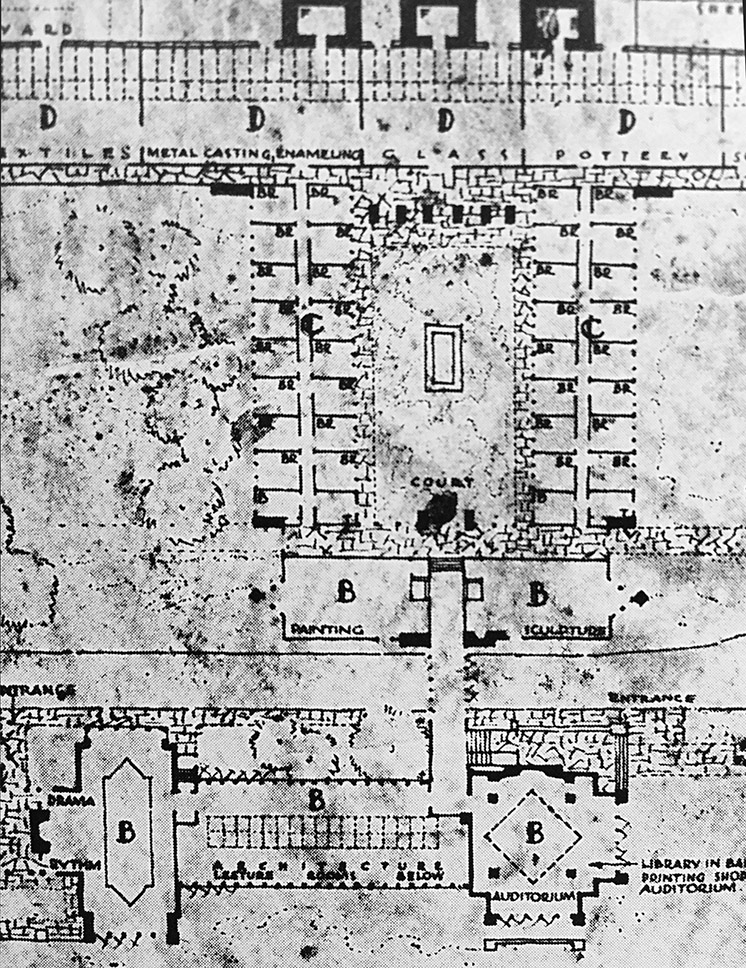 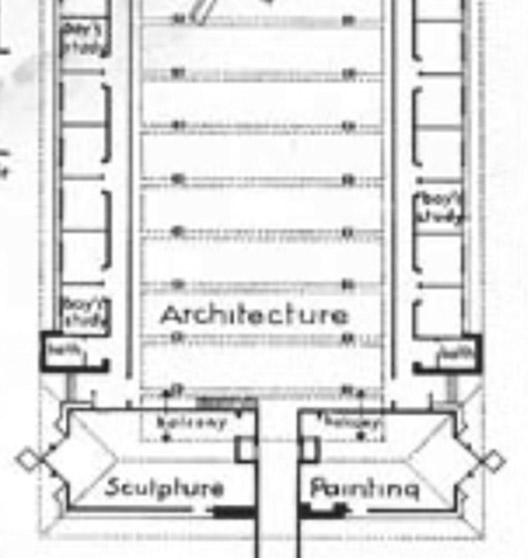 by SpringGreen
That's the project number for the drawings of the space underneath the Roberts Rm. that FLW was thinking about for an archive in the floor below. It would have been interesting if work had been done on that. At least one of those drawings is reproduced in the Completed Buildings, v. 3.

The Fellowship made the decision to get those things to the desert, which makes sense in keeping them out of the humid Midwest. I can't imagine how angry FLW would have been to see those things then end up in NYC. I also can't imagine how FLW thought it would have been possible to put his entire archive under the Roberts Rm., which is smaller than the Dana Gallery.
by Tom
So, it seems that this Charles Roberts created an electric car before the
turn of the century.
Cool what one learns here.
All times are UTC-06:00
Page 2 of 2