by Meisolus
I've become interested in a tiny project of Wright's: The Universal Portland Cement Co. Exhibition Pavilion. It was a temporary pavilion that only stood for a few months. Wright liked it enough to include it in the so called Little Wasmuth and it's a fun little design. I'm thinking of modeling it, but there is precious little information. All I've found so far is the Wasmuth perspective and a single sheet with plan, elevation, and section on it. The drawing sheet was published in Frank Lloyd Wright: The Complete Work 1885-1916. Does anyone have anything else? 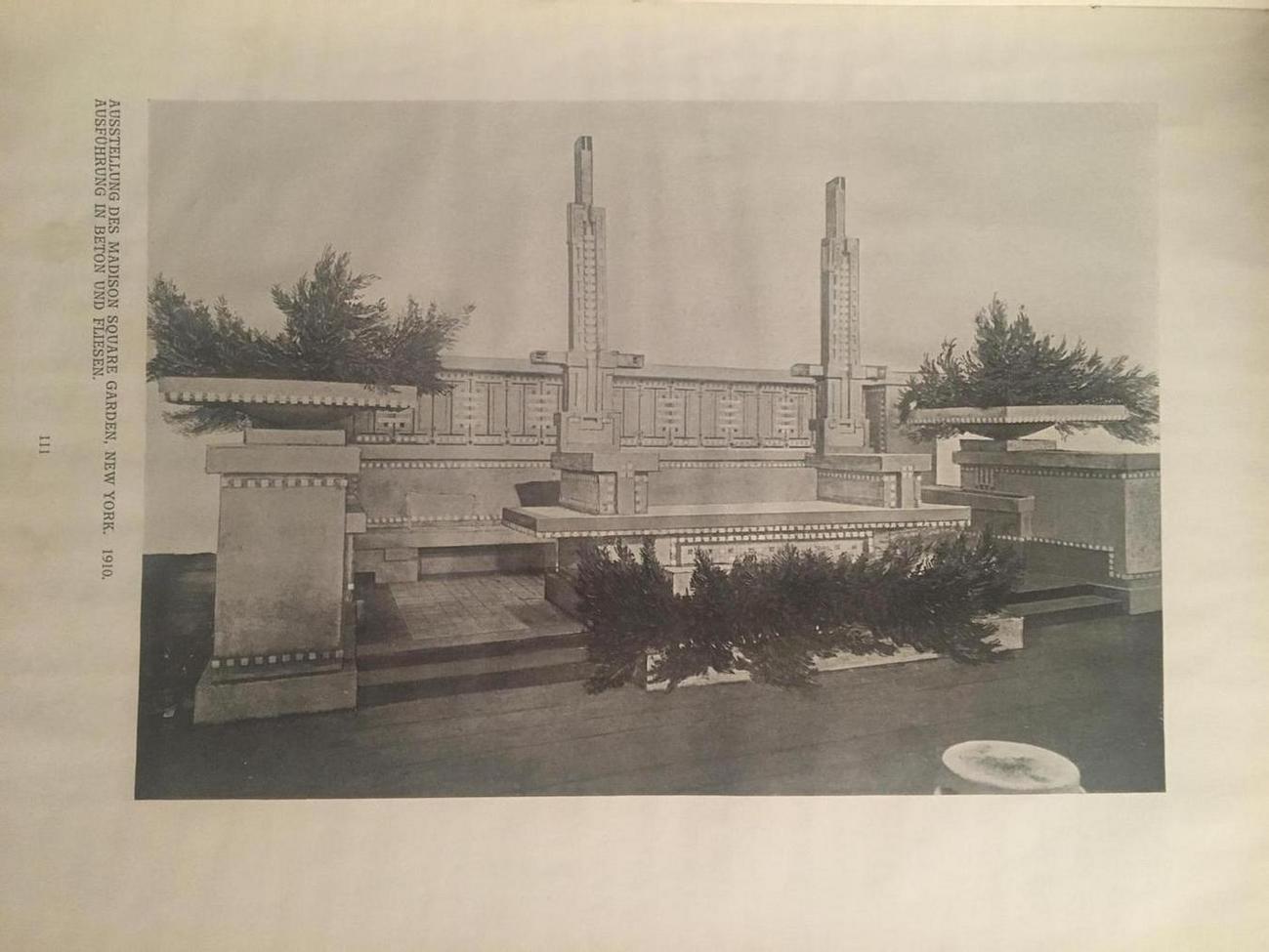 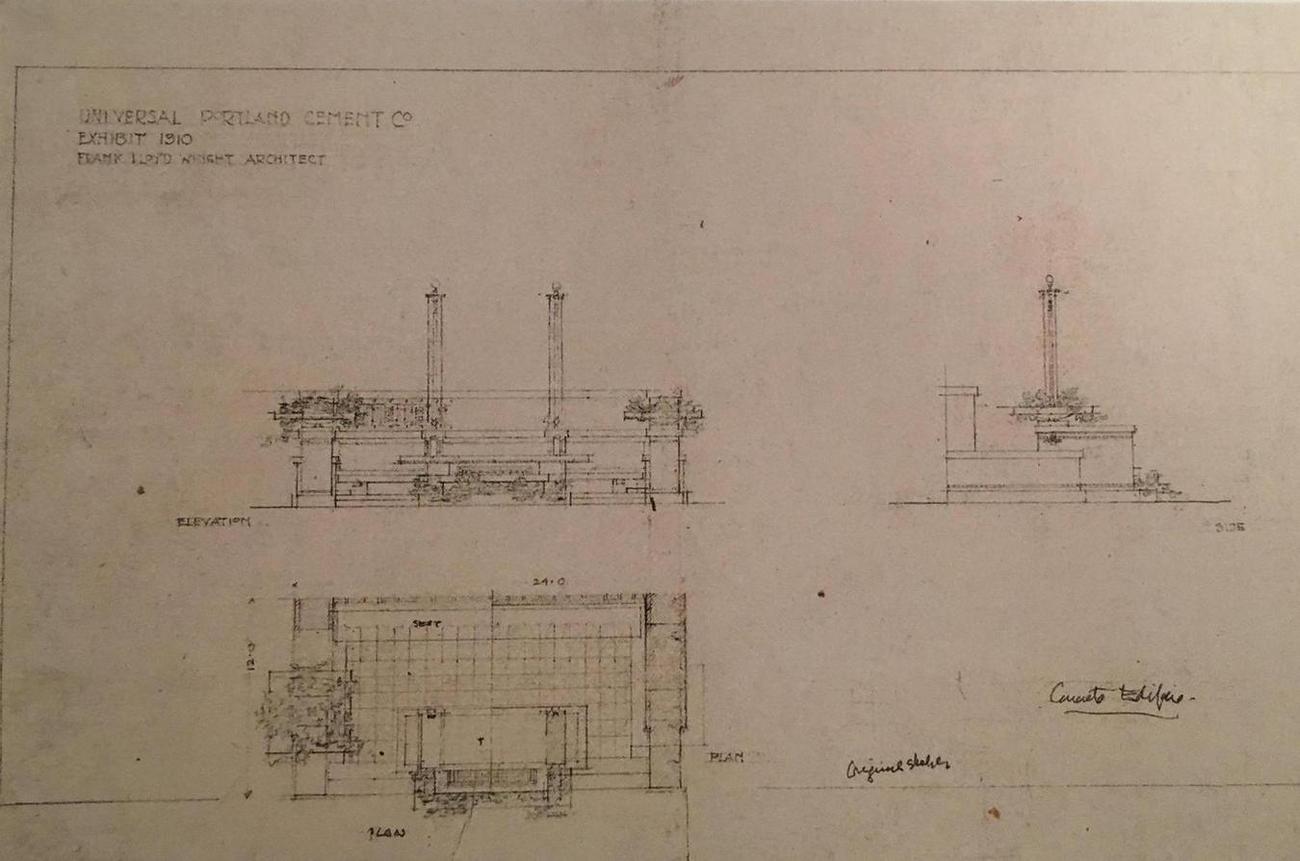 As always, all thoughts are welcome. Thanks everyone!
by SDR
If you got that plan sheet from Taschen, then you have what I have. Pfeiffer omitted the work from Monograph 3, and gave it little room in Taschen. Here's his text:

S
by Meisolus
I need to scour my own library. I specifically remember reading that the tiles were pink, green, and white, and that the flooring was green marble tile and I feel like I even saw that called out somewhere on a sheet. I'll see if there is more to post...
by Roderick Grant
The Madison Square Garden exhibit was an offshoot of a grander exhibition in Buffalo in 1901 (Storrer 63) for which no information has ever turned up.
If it's just the above tidbit you're interested in, as opposed to the entire shebang, there should be enough information to work with.

If it's the entire building, perhaps another exhibition building of 1907 would be of interest. The Larkin Exhibition Building for the Jamestown Tercentennial Celebration (Mono 3/46; Tasch 1/297) has surviving perspectives and elevation, though no surviving plans. Then there's also the Women's Building in, I believe, a Canadian exposition. There is something about it floating in the WC ether. All those exposition buildings were alike: blank space for displays. Only the envelope counted as design.
by PrairieMod
The reason there are no photos or drawings for the Buffalo pavilion in 1901 (Storrer 63) is because it never existed.
by Reidy
A Google search on universal portland cement company frank lloyd wright turns up nothing much on this design, but some interesting photos of Midway.

Jack Quinan has written a book on all the Buffalo designs. You might find information there.
by SDR
Interesting, Eric. Can you elaborate ?

S
by SDR
Mmm. Some photos of Midway that may not have been published elsewhere ?

S
by PrairieMod
SDR--it's a little too much to post here so I sent you an email.

One of the past "Explore Wright" newsletters explained the details of busting this Wright myth, if anyone has a copy.
by SDR
Heh. Thanks ! Another Wright mystery . . .

While some of the colors would have to be conjectural, it seems from the photograph that you should at least be able to tell the white tiles. It looks to me as if the picture was retouched specifically so they stood out. Incidentally, I'd love to see a version of the photo without the retouching. I'm sure it's drastically different.
by Meisolus
Reidy, I'm going to order the Quinan book, thanks. I've liked his other work so I'm sure this one will be enlightening as well.
by Paul Ringstrom

Eric,
Please explain what the "Explore Wright" newsletters are. When were they published and by whom. Are copies still available?
by SDR
Eric O'Malley is to be credited with unearthing what must be the source of the phantom Universal Cement exhibit for Buffalo of 1901: H-R Hitchcock, and Wright himself, unintentionally conspired to create a work which never
was, by listing the project both in the Chronological List, the backbone of Hitchcock's 1941 "In the Nature of Materials," and in the book's index. Mr Wright himself has to be the source of this phantom; Hitchcock wouldn't
have had material or the notion, surely, to concoct it.

S
by Roderick Grant
PrairieMod, that is a tantalizing bit of bombshell. How about a summary of the salient parts of the story? How did it get started? Why has Storrer kept the entry in his books?
All times are UTC-05:00
Page 1 of 4