I had wondered if they might be electric light fixtures as well. The sketches show a globe atop the totem poles, so it's certainly a possibility.
by SDR
Ah---of course; I didn't think to start at the beginning . . .

S
by Meisolus
I see something linear inside the terminals as well. I'm hoping to get some more information. A friend of mine did a lot of digging into the Universal Portland Cement Company and found a lot of great information. We're hoping it could lead to some more. It looks like they did all the concrete for Midway Gardens a few years later, so I would guess Wright had a good relationship with them.
by SDR
I'd love to think that there were cubic lighting "globes" on those terminals---but that's just me fantasizing. Round ones, on the other hand, would speak to the circular planter basins . . .

S
by Paul Ringstrom
Meisolus mentioned a book he referred to as the little Wasmuth. Does anyone know what was the exact name of the book, the name of the publisher, and publication date?

Is he referring to the 1963 Horizon reprint?
by Paul Ringstrom
Iowa State students have built several models of various Wright buildings throughout the years for the Stockman House visitor center and I recall that we once had one that was labeled Portland Cement. I wonder where they got the info needed to build it.
by SDR
And . . . where would that model be today ?

http://www.steinerag.com/flw/Books/a0087.htm
by Roderick Grant
"The Early Work ..." was not published concurrently with the portfolio, but a year later. That book contained the image of the Universal Portland, which does not appear in the portfolio. I believe what you are referring to as a photo is actually a perspective drawn for the portfolio, but not included in the published product. The curious ellipse at the bottom of the image may argue against that assumption, but if it is a photo of the actual structure, the editing went way overboard. If it is a drawing, that would more logically explain the "ghost pillow."

The exasperating differences in FLW's drawings makes absolute determinations very difficult, since many drawings are undated. I found, while working on the drawings of the Barnsdall couches, that the best way to do it was to make drawings of all versions and then throw a dart. But the overall scale of the drawings always turn out to be accurate. Since I have not done the work on this project that you have, I cannot be certain about how accurate the initial major dimensions are, but I would be hesitant to alter them. It looks like 12'x24', and I would begin with that and change it only if it simply could not work.
by David
Work in progress! 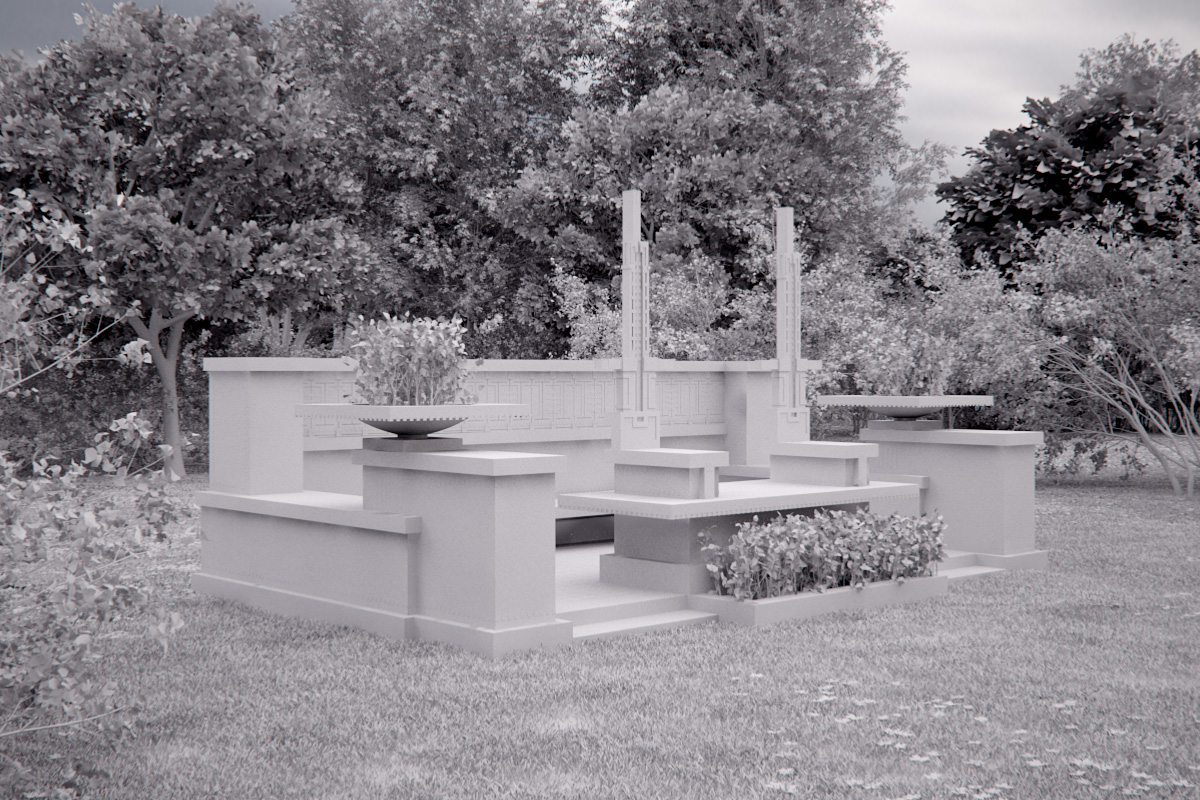 by SDR
Well, that's handsome, David. The elevation of your camera, however, welds the spires to the rear wall, losing something of the spatial composition as a result ? Perhaps you like the asymmetries this view produces; the right-hand elevated planting disappears as well (in monochrome), furthering the effect . . .

S
by David
Interesting reflection I will take that into account!

Monochrome images, or clay renders, have their charm but do not worry that the final result will be much more colorful!
by Meisolus
I'm sorry that I haven't posted in such a long time on this topic, but I got a new job about two months ago and life has been really hectic. I did manage to go back to the model and make some (to me) pretty significant changes. What David posted is much closer to what is shown in the retouched photo than I had before. And I can say that David is doing his usual spectacular job of bringing it to life.

As always, thanks for everyone's input. It's invaluable!
by SDR
It wouldn't surprise me to find that, in construction, a field of 1" tiles spanning many feet would't get off-grid. Indeed, one wonders how a tile-setter, in the
days before 12 x 12 sheets of tiles were available, would do a layout to assure himself of not ending a run with half a tile. The only error that would be
noticeable would be wandering of vertical alignment---the same problem sometimes observed in running-bond brickwork ?