You agree not to post any abusive, obscene, vulgar, slanderous, hateful, threatening, *-oriented or any other material that may violate any applicable laws. Doing so may lead to you being immediately and permanently banned (and your service provider being informed). The IP address of all posts is recorded to aid in enforcing these conditions. You agree that the webmaster, administrator and moderators of this forum have the right to remove, edit, move or close any topic at any time they see fit.
Post Reply
148 posts

Roderick, after looking closely, I think you're right - the grid is 1.5', which is great news. My life just got a lot easier.

Roderick, please explain to me how you're getting 1'-4". I'm not trying to be difficult or anything, I just don't understand where you got it from. I'm having a hard time reading the scale in comparison to the grid and putting it into AutoCAD hasn't helped. Honestly I think you're correct, and it certainly sounds more Wrightian to me, but I'd just like the justification. Thanks!
Top

The units along the upper edge of the drawing measure 4', according to the scale to the left of the plan. Divide 4', or 48", by 3, and you get 16". FLW's major rectilinear grids were invariably divided into 3 minor grids.
Top

Interesting ... ordinarily Mr. Wright would have specified raked joints ... but here someone decided to fill in the joint with slanted mortar ... evidently to better shed water The question is ... was that decision made by Mr. Wright, by the person who supervised construction ... or were the raked joints filled in for cause, long after initial construction.

Does anyone know?
Top

That is a good question; the messy look of the described joints makes them inherently un-Wrightian, in my view -- though of course this may be the best solution in terms of longevity. I'd bet that the architect would have raked the
stepped bed course along with the rest, consistency being his aesthetic watchword -- and longevity be damned . . .

Yes, though Roderick failed at one point to observe the orthodox form -- 1'-4" -- I'm confident that 16" is the correct unit, for the reasons that he states. One-and-a-half feet is eighteen inches, not sixteen, Mies; I regret that you've
had to wade around in our antiquated system of measurement in order to deal with Mr Wright (and the rest of us). Decimals will do you no good in the world of feet and inches -- though I work with an architect now who insists on
expressing fractions of a foot in decimal terms. Fie on him; a Berkeley upstart.

Although I hadn't realized that Wright invariably subdivided his square grids by thirds, there is evidence of his doing this on the sheets for the unbuilt Foster residence, where the whole sheet is marked with this grid. We recall
that R M Schindler favored the 16" vertical module, as well. This is the most rational of building modules for the American, at any rate, as our plywood sheet size, four by eight feet, is derived directly from building practice going
back well over a century: wall stud spacing has been held to 16" since the beginning of the baloon frame (is that right ?) and laths for plastering were cut at four feet before plywood and sheetrock were thought of . . .

So here is an interesting tidbit regarding our once lost perspective for the Fir Tree Cabin - when it was originally published in Berlin in 1926, it was published in color. While most copies of it I've run across have been in black and white, this is apparently due to photocopying etc. Going back through the De Long book, they had a full color reproduction of the sheet. The colors are a bit bolder than the more recent photo, but the kicker is it seems quite a bit crisper.

One thing that strikes me is how deliberate the diagonals of the retaining wall are. It appears to me that the decorative blocks along the top of the wall even have an angled element to them to correspond. This is striking because all the rest of the cabins have horizontally drawn masonry. That tells me the diagonals are extremely deliberate and not some kind of graphic affectation.

You can also make out the pattern of the windows better. In many of the other cabin designs, Wright shows a distinctive diagonal design that seems to imitate tree branches. The same seems to be the case here.

The interior of this cabin would have been very dramatic with the unusually shaped skylights set into the high ceilings. Despite its small size, it would have been like staying in a cathedral. 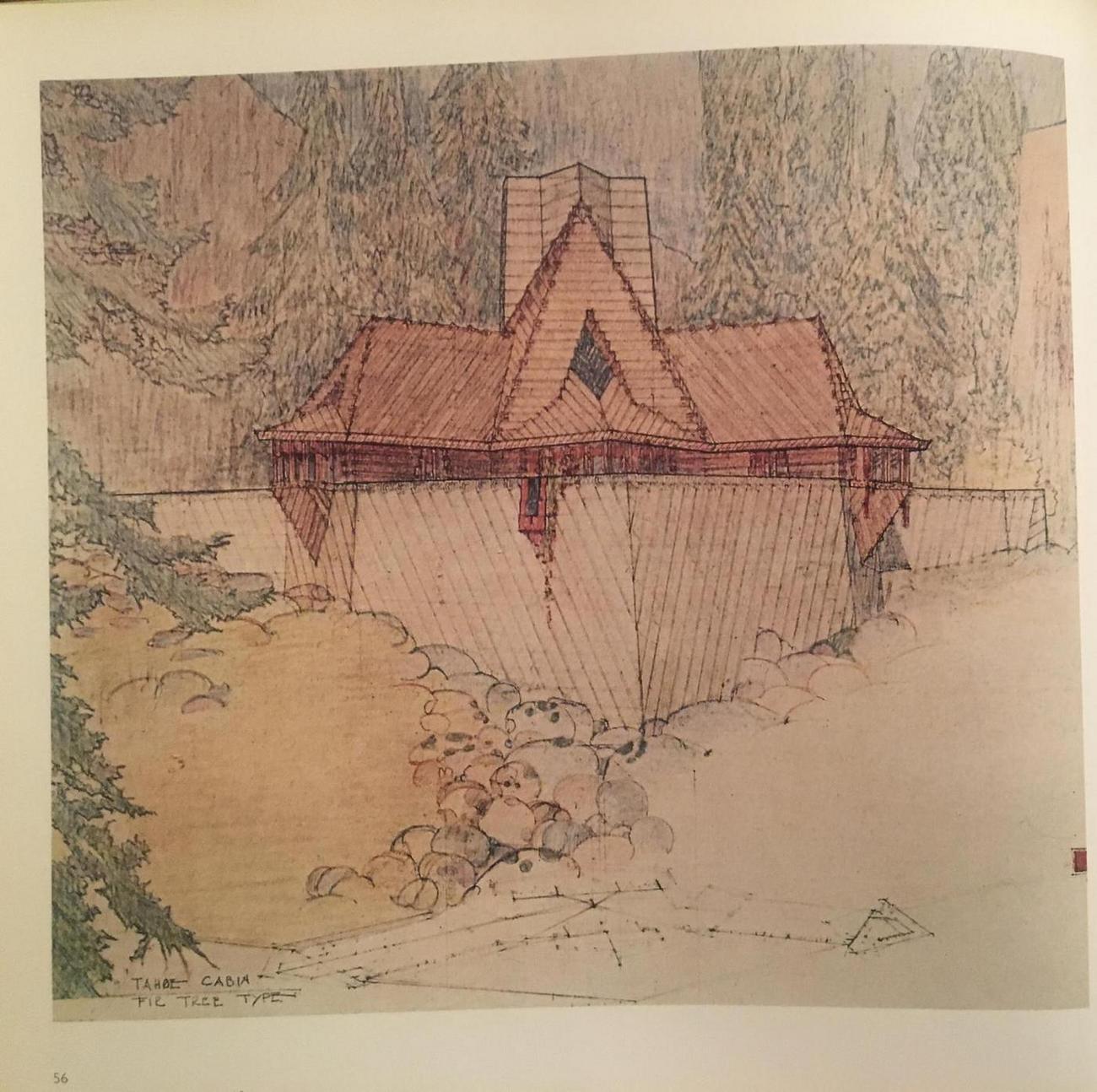 And thank you for the clarification about the scale Roderick. That was enlightening.
Top

It's good to see that drawing at good size, finally, and in color once again. This sheet contains one of many examples in Wright's portfolio of a rendered perspective with evidence of method, namely the plan constructed
in perspective at the bottom of the page. Do I detect at least a bit of difference in the form of the bedroom terminals here, as compared to those on the plan that we have ?

Do we believe this drawing to be in Wright's hand ? Could it be Lloyd ? I don't think so; the consistent outlining of form, and the colored-pencil rendering, make it Wright's -- and forecast the look of drawings made in the
future by his apprentices. Lloyd had his own set of tricks . . .

I haven't found Wright and his boys to be fudging architectural texture in these perspective views. He seems to have taken the representation of his materials as seriously in these drawings as in the elevations that
precede them. That is, materials are rendered accurately as to dimension -- heights of brick or block courses, widths of wood siding and of roofing materials, etc. Wright pleases us by couching his romances in concrete
terms, as if he really wished to know, and to show, what his chosen palette in each case would look like when constructed. For all the romance of this vision of architecture, it is grounded in "the real."

Thus, I never doubted for a moment that his diagonally-marked (or laid up) wall texture here was fully intentional and accurately dimensioned. The mystery to be solved is, what exactly is that wall composed of ? Is it
decorated poured-in-place concrete ? That's possible, I suppose; the same question must be asked about the chimney of this house, or the base walls of other houses in the series.

There is certainly enough decoration on this building: in addition to the diagonal texture trimming the top of the big wall, there is a decorated roof fascia, and more stuff climbing up the hips and along the ridges of the roof.
One roof surface seems to be composed of alternating tones of whatever that material is, and one of the bedroom window bays is supported by diagonal-board cladding. Shades of Auldbrass, also in Wright's future . . . ?

There doesn't seem to be a high enough level of detail to any of the drawings to figure out all of the decorative elements. While I think the decorative blocks along the retaining wall are clear, I have no idea about the roof ridges etc. Is there a built building that features some of these elements or are there unbuilt designs with more detail? Some of it I could infer from other Lake Tahoe cabins, but it's hard to see in other designs as well.
Top

I have belatedly discovered that a neglected book, "FLW -- Designs for an American landscape" (1996) gathers the available (remaining ?) drawings of the
Lake Tahoe Summer Colony most generously: there are 22 images (sketches, plans, elevations and perspectives), virtually all in color if not all at very large size.

Here are the clearest examples of the roof-ridge decor to be found among those drawings:

The elevation, plan and perspective of the last house shown present a conundrum: Did FLW intend to finish the bedroom roof on the right as a gable and the one on the left as a hip? Did he intend to have matching roofs, and change his mind, altering just one? Which came later, the hip or the gable, the elevation or the perspective? Which is more comely? Does anyone care?
Top

The decorative diamonds along the roof ridges to my eye closely resemble the points on the "leaves" of pine cones.
It's a detail retained on Beth Sholem for exterior uplights.
Top

Tom, I agree that the 'diamonds' on the Tahoe roofs relate to the pine trees, but Beth Sholom is another story. Every detail in the Synagogue is symbolic of Judaism. As Rabbi Mortimer J. Cohen notes in his slender book (page 10):

"On the three ridges of the Synagogue seven-branched Menorahs, artistically conventionalized, can be seen from every direction. In the ancient Tabernacle the Menorah was a central symbol, so on the Beth Sholom Synagogue the great Menorahs lift their arms as in prayer."
Top

Ah - and I've never read anything about Beth Sholem except from Letters to Clients!
Top
Post Reply
148 posts