You agree not to post any abusive, obscene, vulgar, slanderous, hateful, threatening, *-oriented or any other material that may violate any applicable laws. Doing so may lead to you being immediately and permanently banned (and your service provider being informed). The IP address of all posts is recorded to aid in enforcing these conditions. You agree that the webmaster, administrator and moderators of this forum have the right to remove, edit, move or close any topic at any time they see fit.
Post Reply
75 posts

For me, images that include the vehicles of the time always help snap these homes into a broader context. They are visual reminders that Wright was ahead of his time. Thanks for these. For what it's worth, there appears to be shot taken of the same scene from a different vantage point on p.27 of FLW's Taliesin by Randolph C. Henning. The post card description notes, "Ã¢â‚¬Â¦a horse and buggy (and quite possibly Frank Lloyd Wright) is seen waiting in the drive". It also notes that post card series is from early 1914.
Top

Great thread
What a treat
Top

JChoate wrote: What's going on there? Which part of the building is that? 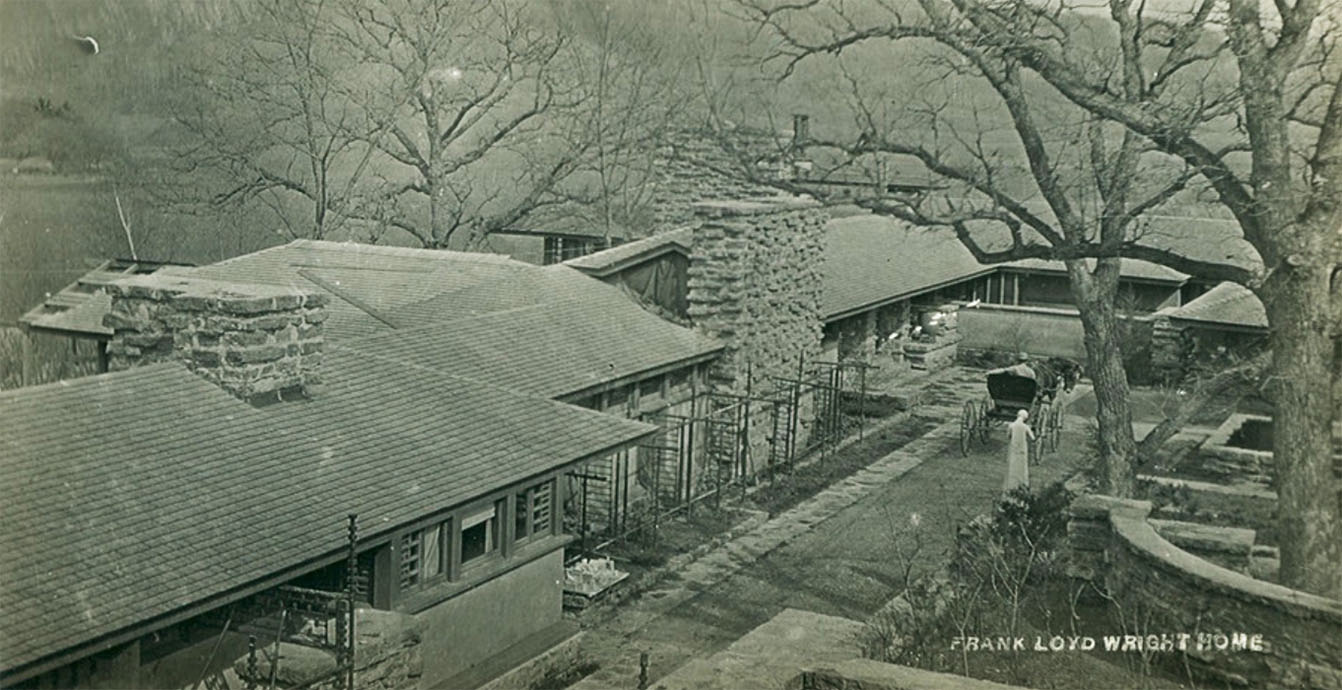 The first significant revisions to the studio occurred between 1912-13. The first photo with the auto is very early 1912 before significant revisions. The photo with the buggy and perpendicular extension to the studio wing is Wright's personal office area-which basically remains today. The tarp-draped clerestory was the first actual studio revision, before the footprint was eventually pushed out in the direction of the office. Interior photos of the original studio document perhaps the very first revision-he already had made a minor change to the ceiling trim as evidenced by the plaster discoloration!

In both photos, if that is Wright (the mans physique appears similar to Wright's), he's probably waiting for the photographer to take a few last minute shots before getting him to Spring Green for the train back to Chicago.
Top

The hat the man in the buggy is wearing isn't a porkpie. It looks more like a bowler. Did FLW ever wear a bowler?
Top

I have never seen Wright in a bowler. In fact, I have only one image of the man in a hat at a date earlier than the 'thirties---though there must be one, somewhere.

I would assume FLW would not wear a bowler because of its lack of aesthetic appeal. What prompted him to wear the hat in the first photo, which made him look like "Wee Willy," is hard to imagine.
Top

I wonder if anyone can find a photo of Wright wearing what non-Wrightians call a pork pie hat . . . 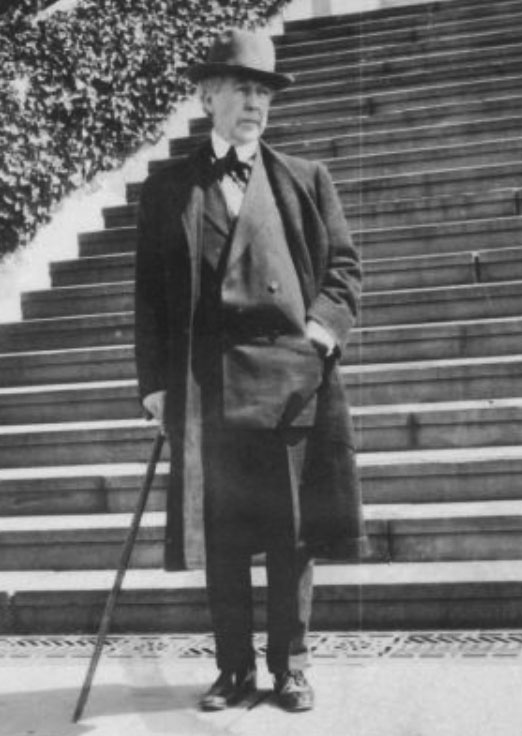 This raises a good trivia /research question:
It's my understanding that Cherokee Red became FLW's signature, go-to color preference beginning with spotting of the red car during the Fallingwater design process -- as late as when he was almost 70 years old.

Along those lines, when did the FLW adopt that signature 'pork pie' hat look? I don't recall any photos of him in that hat with anything other than white hair. Was that another thing he started into his 70's?
Top

He doesn't look very happy in that hat, does he James ?

The pork pie hat as described in the Wiki piece seems designed for wearing in windy weather: not only does it have a narrow brim, but it includes a hidden tether to be attached to the wearer's clothing !

I've numbered the photos I posted. Which of the hats Mr Wright is wearing qualifies, to us, as a pork pie ? 6, 9, 12 and 13 have the narrowest brims, I think; how many others qualify---if any of them do ?

Would Mr Wright be outraged, perhaps, to find that we were putting him in a pork pie hat ? Did he ever refer to such a thing, himself ?

The brim on this one is dinky: 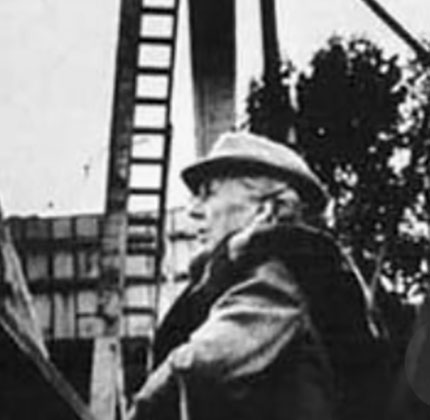 All of the hats on this page https://www.amazon.com/Stetson-Oakbrook ... B07KGFS5PZ have brims a bit---or more---narrower that all but the most recent photo posted here . . . 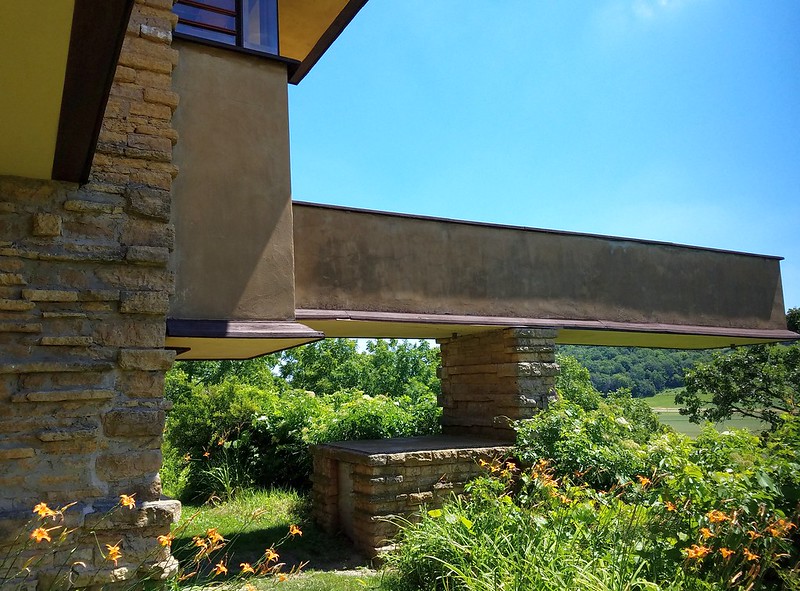 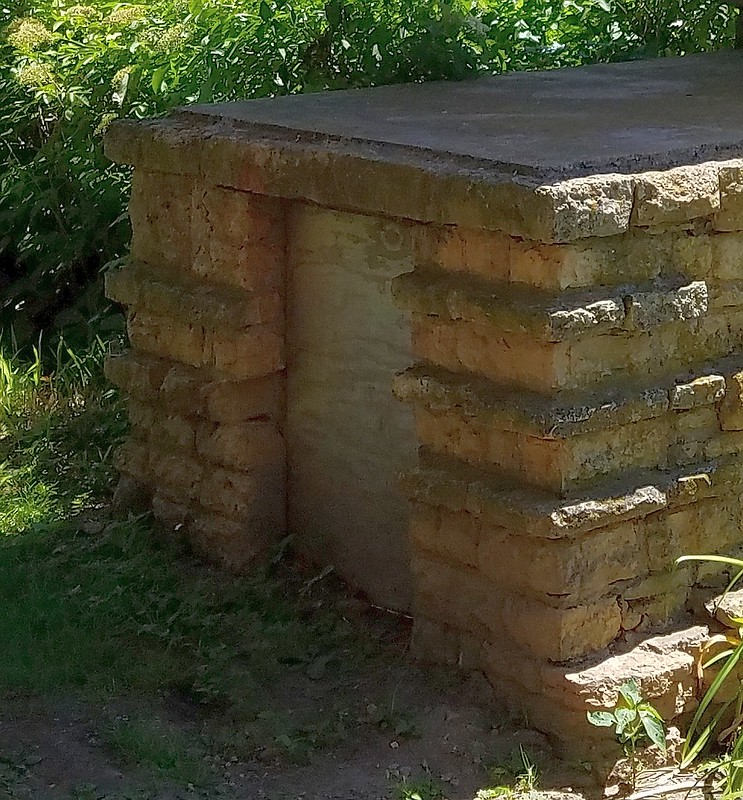 I believe this is concrete but has plywood form markings embedded on it. I took this photo July 3, 2016. Oddly, 180 degrees from this is a small, wooden door painted red as part of the south Taliesin wall. [/quote]
Top

Hair is a great insulator. As one ages, and hair vanishes, slowly or quickly, that insulation goes with it. One thing few photos of FLW show is him in anything short of full dress, whether in Wisconsin in the winter or Arizona in the summer, indoors or out. He was, according to many at Taliesin, always cold. Probably a circulation problem. He even fashioned trousers with straps at the cuff to keep the wind from going up his pant legs. I suspect the crown of any hat he wore was more important than the width of the brim.

I like the grate at the bottom of the stair. Japan ?