You agree not to post any abusive, obscene, vulgar, slanderous, hateful, threatening, *-oriented or any other material that may violate any applicable laws. Doing so may lead to you being immediately and permanently banned (and your service provider being informed). The IP address of all posts is recorded to aid in enforcing these conditions. You agree that the webmaster, administrator and moderators of this forum have the right to remove, edit, move or close any topic at any time they see fit.
Post Reply
52 posts

I suppose the glass is necessary to protect the large screen in the studio, but it is unfortunate.

I tire of wide angle interior architectural photography which obliterates all proportion and composition, as if taken for a real estate listing. "Look how BIG this room is! You can see EVERYTHING!". I keep expecting to see a listing price below the photos.

Especially with Wright, where there's already a "built-in" illusion of scale which is lost. Perhaps not critical, but does make experiencing the spaces for the first time more rewarding. Such photos, rather than convey, misinterpret to a very annoying degree.

While I'm at it, I question the Dana sculpture placement on the studio shelf... but it is great to see the Hoffman carpet still out of the living room.
Top

Certain photos explain parts of the property that I hadn't understood before -- like the clerestories above the entrance path in the living room. And the ceiling treatment on the fireplace side of that space is revealed, with decorative strips that seem to indicate a progression that was not completed ?

I'd like to learn more about the "built in illusion of scale" that JimM refers to.
Of course this has something to do with the famous "compression/release" formula.
What else can be described in understadning this analytically?
(Yes - wide shots - yet I understand the temptation shooting Wright's work. The format is at least informative.)
Top

SDR wrote:Certain photos explain parts of the property that I hadn't understood before -- like the clerestories above the entrance path in the living room. And the ceiling treatment on the fireplace side of that space is revealed, with decorative strips that seem to indicate a progression that was not completed ? SDR

Difficult to see in such distorted photos, perhaps, but the wooden strip to which you refer forms a right-angle "hook".
Top

Or, a hockey-stick, anyway ?

Does that piece strike anyone else as part of an unfinished perimeter trim -- perhaps ?

The distortion found around the edges of many interior photos are present here; look at the windows on the right in the first photo. We know they are
squares, like the ones at the end of the room -- but they appear as elongated rectangles in the photo.

One condition that I find curious is the configuration of Mr. Wright's own bedroom space. It evolved over the years to become more of an office space, but retained a corner for his bed where he slept, and adjacent wardrobe cabinetry where presumably he dressed.
The odd thing is the absence of a door for privacy, even as the room sits at the terminus of the long visual axis thru the house (seen in the top photo below).
I guess he'd shuffle across the axial view to get to and from his bathroom morning & evening, presumably so even when distinguished guests were staying in the fancy guest room or in the guest room just up the stair that is visible in the lower photo.
He really was a believer in open plan living. 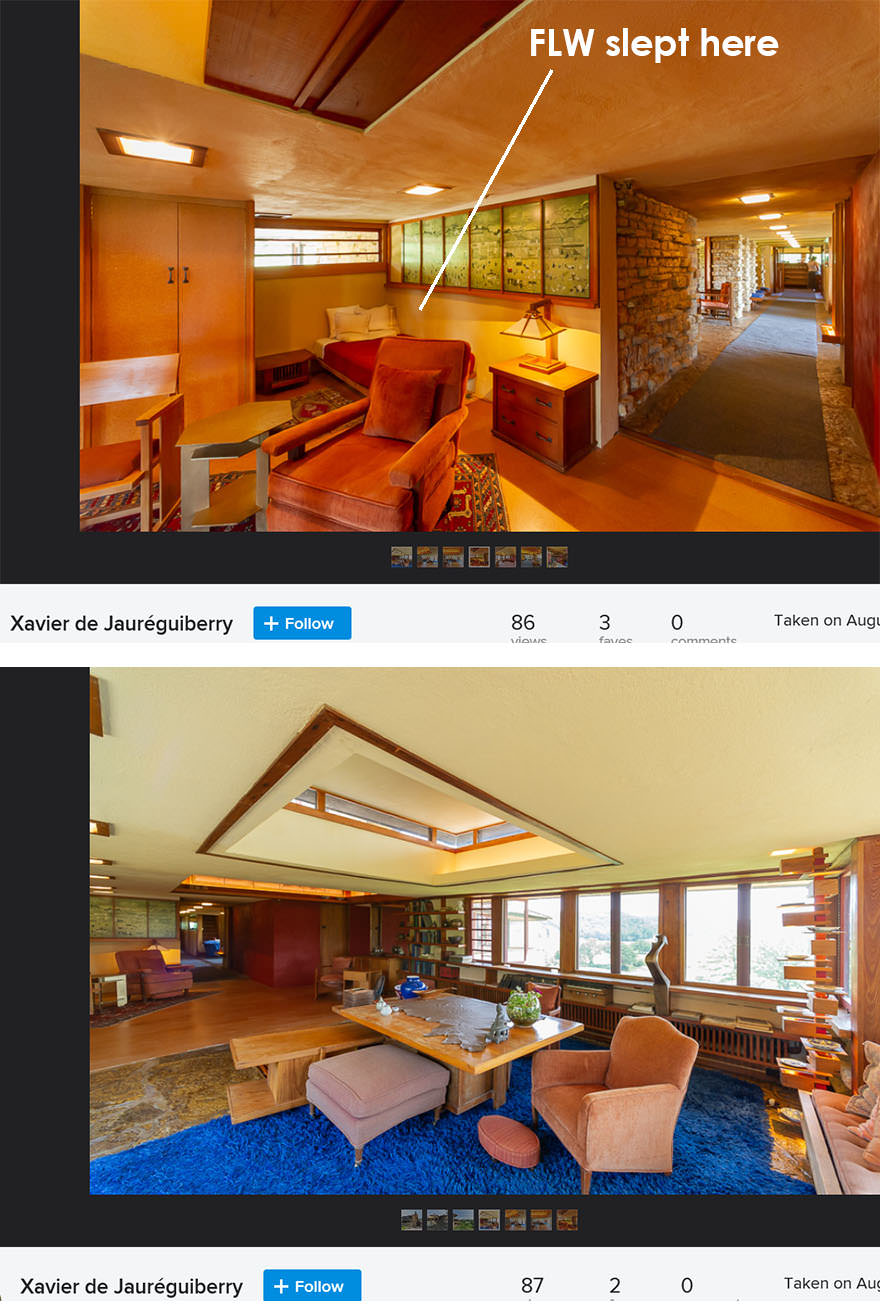 It appears that Mr Wright could see someone coming into the house via the front door, while sitting at his desk -- someone like the figure seen in the distance in the first photo ?

"Mr. de Jaureguiberry's wide angle photos give lots of information and show the relationship of adjacent spaces." Indeed; and that's what makes any
shortcomings quite secondary to the main event. (Heck, I can barely get everybody to provide content at an common aspect ratio on my broadcast TV !)

Thanks for the images. SDR
Top

The "bed corner" of Mr Wright's room goes back a ways, appearing in nascent form in the second of this sequence of plans as a "sitting room" with a bed in the north corner of the space.

On the other hand, the concept of a central gallery connecting both ends of the residence didn't come into being until Wright's final redesign . . .

I have seen earlier versions of the present bed, and that recess at the back of the space; perhaps someone could recall for us where such images are
to be found.

S,
That's an interesting sampler of floor plans. I presume the first few are T1, and the last one is T3, looking like the 1937 era with that smaller, wonderful bedroom that appears in Hedrich Blessing's photos.
In those photos, I suspect the photographer scooted the bed out of the sleeping corner (shown on the floor plan) over up against the wall where the bathroom door is. I suppose this was done for the editorial sake of demonstrating it was actually a bedroom. So, it's not an accurate photo in terms of actual function, but it conveys the warm & coziest of spaces -- especially the cozy corner by the fire. 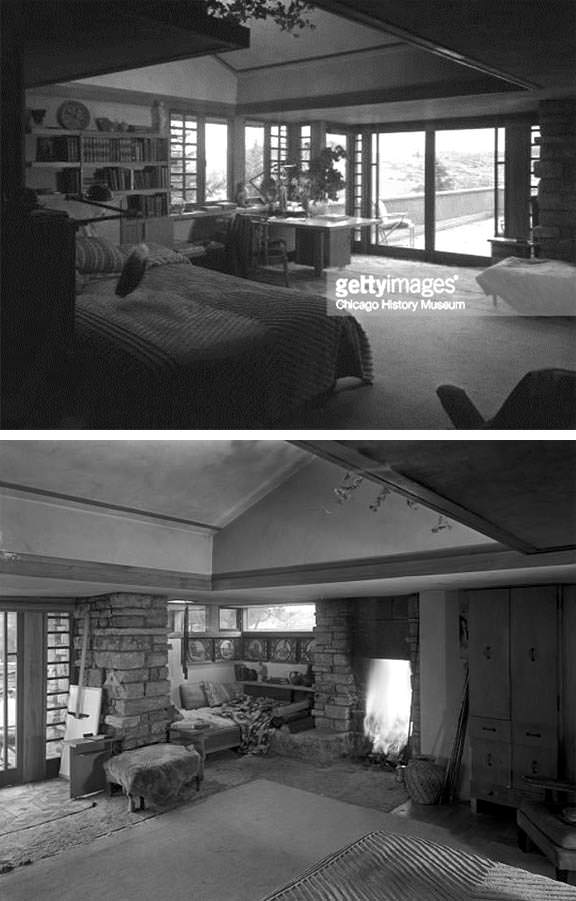 That next-to-last, sketchier floor plan is a bit confusing. When did it occur?

I'm confused about the spaces and circulation intended. It's the opposite of the final configuration where you could shoot an arrow from one end to the other. It offers only a circuitous route to get from one end to the other, requiring passing thru rooms 'enfilade'. At one point, where the circulation wiggles around corners, it appears a solid wall has a door swing indication, suggesting the passage was a second thought. I guess in this plan FLW's bedroom would still be next to the living room where the current fancy guest room is (yes/no ?).
I'm guessing this may be a post-fire sketch where FLW was sketching the idea for an addition, sketched onto an existing plan, so there are some new ideas drawn over unrevised existing conditions. (?) He's penciled in the words "loggia" and "bedroom" -- perhaps those are the new ideas he's studying. 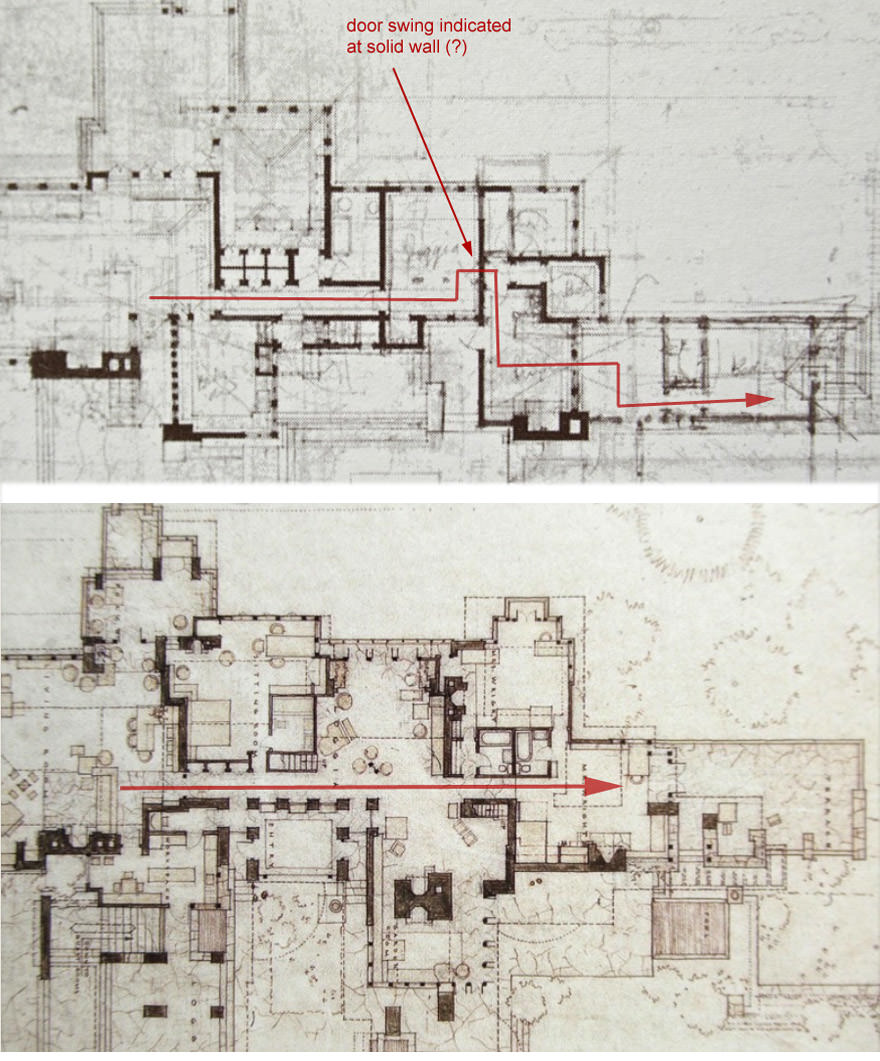 Studying Taliesin by using undated plans drawn over is not elucidating. The clean plan published for the Hitchcock tome shows the door at the upper end of the bedroom-cum-loggia that has been filled in on the scribbled plan to make way for the new door location. My guess (and that's all it can be) is that the house was built as shown in "In the Nature of Materials." The door between the two bedrooms would have been a mere necessity, giving the maid access to the house proper, rather than requiring her to leave through the sitting room into the kitchen yard, thence to the only bathroom in the house to perform her ablutions on a stormy Wisconsin winter night. Notice that there is a second bath in the scribbled plan just for the maid.
Top

I agree that undated plans, partially redrawn by the architect, have limited use. So too, perhaps, do publication-ready drawings of something that was never
built. We have examples of both, in my chronological selection of Taliesin plans. The one characteristic they have in common is authorship by the resident
architect.

I leave it to those more astute and informed than I, to fill in the gaps. Spring Green and Jim M, and of course Roderick, are my go-to sources for the real
skinny re Taliesin.

In this photo, my question about the visual axis right on into the bedroom is sort of addressed:
In the 1937 Hedrich Blessing photo we see down the axis from the living room toward FLW's bedroom, where we see a beautiful decorative screen deployed to provide visual privacy at the same time it serves as a worthy focal point.

Shown on the floor plan in red, the screen adequately segregates the private quarters of both Mr. & Mrs. Wright, but we see an inviting sliver of daylight & more stonework over the top of the screen, which lets us know there's more wonderful stuff down there that we can't quite see (enticing).

I'm wondering if this screen's position was the standard configuration until Mr. Wright's death, at which time there was no further need for the visual privacy, and it was removed (?). 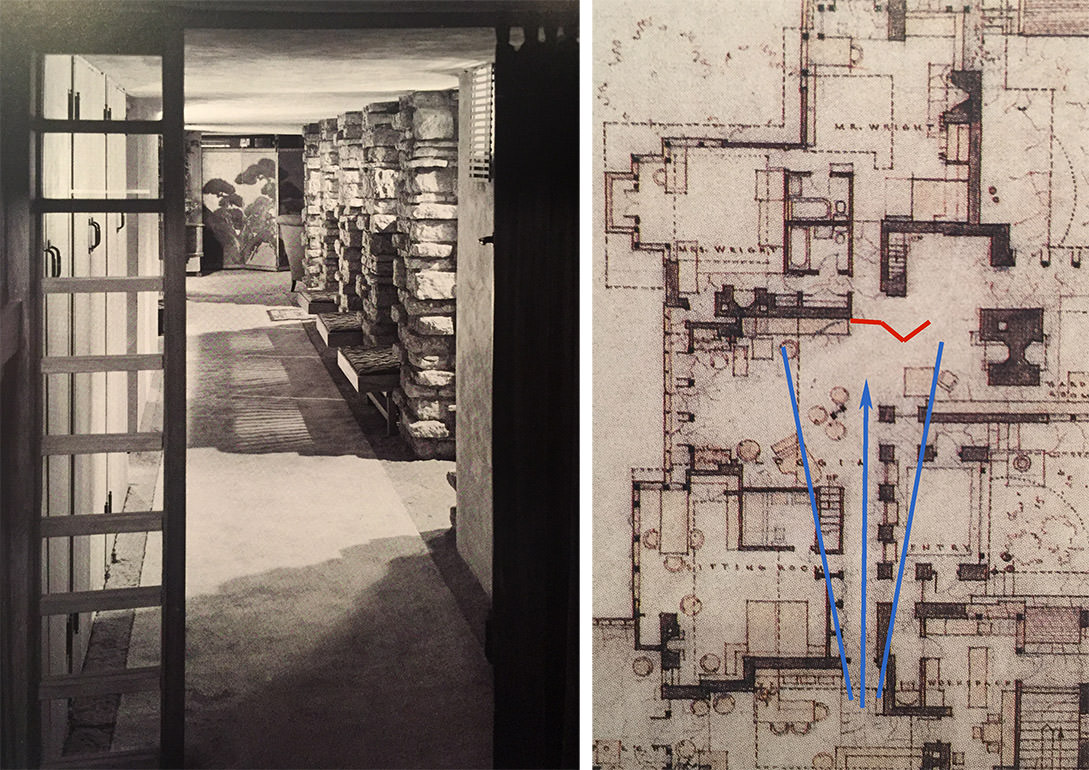 Excellent. That was a long-lens shot, I'd say, to bring the distant opening "into the picture," as it were ?


Here's as far as I got with dating those plans, back in January. (How time flies !) Further data welcomed and appreciated . . .