You agree not to post any abusive, obscene, vulgar, slanderous, hateful, threatening, *-oriented or any other material that may violate any applicable laws. Doing so may lead to you being immediately and permanently banned (and your service provider being informed). The IP address of all posts is recorded to aid in enforcing these conditions. You agree that the webmaster, administrator and moderators of this forum have the right to remove, edit, move or close any topic at any time they see fit.
Post Reply
40 posts

Found this link to Harboe Architects Taliesin West Preservation Master Plan in the foundation newsletter "Whirling Arrow"...
all 700+ pages, including what must be every TW sketch and drawing from the archives. Serious nerd overload.

Would be nice if the same interest was considered for Taliesin. When Taliesin Preservation was first established, their site was heavy into restoration efforts. The master plan, historic survey, as built documentation, etc, were all supposed to be put on line...never happened. I stopped asking about it years ago. Current restoration updates are decent summaries, but not the level of detail the site originally appeared interested in offering.
Top

While looking at the Taliesin bedrooms, I came across photos of the T West bedroom of Mr Wright. The same recessed and cozy sleeping corner is found there that we see at Taliesin (North).

Appendix B / Historical Drawings are incredible.
From the Avery Archives: many design sketches from Wright.
Top

Just where is that found, Tom ?

Coincidentally, I ran across that same PDF on the web last week. I got engrossed and burned up about 3 hours of office time looking thru it.
Not having visited (yet) I was surprised to see how many latter day buildings had been added on, much in not-to-lovely fashion. Those areas typically don't show up on google searches or in books, so it was interesting to see all those nitty gritty snapshots of those less significant places. It is clear when the Master's hand was absent. Harboe's done a good job of classifying significance of the various areas. Hopefully correct restorations (and deletions ?) may be made according to those implied priorities.

In the appendix with the historical drawings (lots of them) it's evident that much was done from FLW"s loose & rough drawings. Unlike the Fallingwater legend/myth, he obviously didn't envision it all in his head but rather picked up a pencil and sketched things to work them out.

Among that group of drawings was a badly weathered rendering of the memorial garden (envisioned by who?) presumaby to contain the ashes of FLW & OLW after his remains had been snatched back from Wisconsin. Rather than being incorporated into an existing wall, it appears to be out in the landscape somewhere, detached from other buildings: 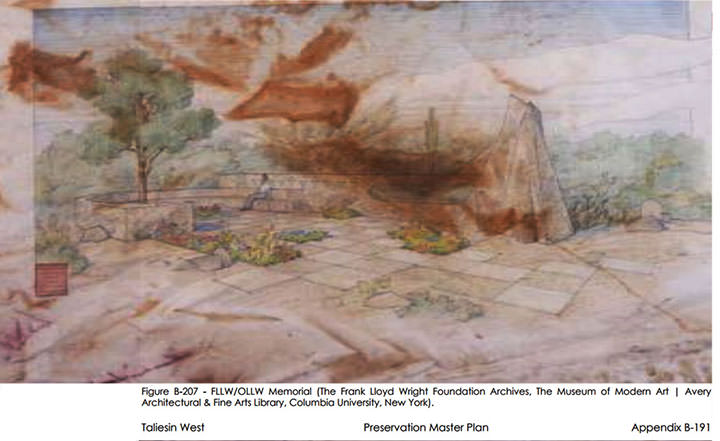 Regarding FLW's bedroom at TWest: according to the masterplan document there was a periof of time when the sleeping quarters had been reconfigured for different uses. Then, recently they were restored to the condition when FLW used it as his bedroom. Having done that, I'm surprised to see the generic, prosaic, store-bought desk floating in the middle of the room (at a random angle in one image). It seems waaay out of place. Was that really the way he had it in his day?
Top

SDR wrote:Just where is that found, Tom ?

At the very end of the Master Plan PDF: it's like a vein of gold.
The first drawing of the water tower with spire is my fave so far.
Wright loved to draw.

(JChoate: re desk at angle in bedroom. I felt the same. No way he put that desk in there like that. It's nuts. And it grates!)
Top

Maybe that funny little desk -- presumably used by Wright ? -- is placed at precisely 60Ã‚Âº to the nearest wall ?

The Jim Thompson renderings of the Office, at the very end of the Appendix, are delicious.

Can anybody identify the interior area photographed at the head of the report -- angled wood overhead, masonry, glass ? John Lautner, eat your heart out !

SDR wrote:Maybe that funny little desk -- presumably used by Wright ? -- is placed at precisely 60Ã‚Âº to the nearest wall ?

The indentations seen in the carpet beneath the desk seem to indicate that the desk was recently moved from about 45 degrees to more of a 60 degree angle.
Top

Among that group of drawings was a badly weathered rendering of the memorial garden (envisioned by who?) presumaby to contain the ashes of FLW & OLW after his remains had been snatched back from Wisconsin. Rather than being incorporated into an existing wall, it appears to be out in the landscape somewhere, detached from other buildings:

OK, I'll bite.
Iovanna called the Lloyd Jones cemetery doleful... this is pathetic. A green deciduous tree baking amid some hardscape and low wall/benches in the middle of the desert? I get the Tea Circle reference, but this is not Wisco, this is a desert....loosely spreading his ashes (oh by the way, FLLW did not choose to be cremated) at the base of a saguaro or an ocotillo would have been more respectful to his beloved Nature.
I sincerely hope this was not the final resting place of FLLW.
Top

Good point. And the FLLW/OLLW Memorial is surrounded by a semicircular wall or seat; are there circles in plan at T West ?

There may not be any 60 degree plan elements, but there are 60 and 120 degrees in elevation all over the place.
Top
Post Reply
40 posts