You agree not to post any abusive, obscene, vulgar, slanderous, hateful, threatening, *-oriented or any other material that may violate any applicable laws. Doing so may lead to you being immediately and permanently banned (and your service provider being informed). The IP address of all posts is recorded to aid in enforcing these conditions. You agree that the webmaster, administrator and moderators of this forum have the right to remove, edit, move or close any topic at any time they see fit.
Post Reply
71 posts

Along those lines, I'd like to know how well the three-ply partition, erected between the second and third bedrooms, acts as an acoustic barrier.

If the steps were built as drawn, they have sixteen-inch treads and 4-inch risers, resulting in a slightly longer stride than is normal. How do those steps feel ? Was Mr Levin a tall man ?

The playroom extension is apparently an inline addition to the study. If so, the demarkation is invisible, with a perfect match of materials. Nicely done . . .

I think the stairs certainly fit in the old formula - 2R+T = 24-26, so its probably very comfortable.

I was in the house a few years ago talking to the owners. They went through an extensive floor restoration campaign, and the results are great! Nice House!
Top

Richard, the apprentice in charge of construction was John Geiger, whose archive is at the University of Minnesota. He was the one who added the large skylight in the kitchen, which was inadequately illuminated by the narrow windows.

SDR, the drawing of the chair indicates a plywood slab (as clearly shown in the plan) with perfs as the front support, not stick legs.

The entrance steps are very comfortable to negotiate.
Top

There seem to be competing formulae. My old source:

Another formulation I've heard is Two risers + One tread = 25", similar to John's.


I'm happy to hear that the entry stair feels good. Naturally, one's height, or length of leg, figures into the mix.

Thank you. Interesting that the exterior stair should be a bit more robust in scale than the interior one. Boots or snowshoes, perhaps -- or Yetis expected for dinner ?


I misread the chair; here are the erroneous and the (I believe) correct readings. Note that the back is a T shape . . .

...does anyone know if my parents are the only original owners of a Wright home who also lived in a home built by one of the Wright apprentices?

The VanTamelen's who lived in an FLW Erdman Prefab #1 moved to California and bought the house Aaron Green designed for the Hughes family.
Top

If I am looking at the plans correctly, it appears that the carport is 28 feet deep and 12 feet wide.
Owner of the G. Curtis Yelland House (1910), by Wm. Drummond
Top

Thanks for all that, Richard. I hadn't realized there was a Wikipedia complete "List of Frank Lloyd Wright works." Now we can all peruse it and look for errors!
Top

Thanks, Richard. So, the glazed blocks have glass in both the interior and exterior halves of the block ? Guess I hadn't thought about that. Did you see flying insects inside ?

Wright's bench seating serving as overflow beds -- hadn't considered that, either. Some of these have flat seats, while in other houses they are sloped. The flat ones would be better for sleeping, I guess.

Indoor fruit trees, bearing fruit ! What I don't know about plants would fill . . . an arboretum.


There are Wikipedia pages for many of Wright's houses, though perhaps not for all. Here's the one for the Levin residence.

While the author(s) aren't identified, there are seven sources cited, including the Levins themselves. The page was last edited 10 January 2018.

The Wikipedia article was created by my niece, Hannah Levin, with assistance from her father, Dr. James Levin. Regarding flying insects, they were primarily house flies. On the worst days we would kill in the dozens.
Top

Thanks. I was reacting to this: ". . .as a kid I enjoyed watching from a distance all the insect activities that went on between the glass. . ."

I was also curious about the acoustic privacy issue (if any): how effective was the wood-sandwich wall between bedrooms in that regard ?

On page one of this thread, Mr. Levin mentioned the Winn House:

Of the three other Wright Home families my smallest amount of contact was with the Winns.

This rainy weekend, having not been there in a while, I spent some time in our local art museum in Atlanta. Like lots of museums in various cities, we have a small flock of FLW furniture (& one of the ever-present Coonley Playhouse windows. The star of our little show is the only original SC Johnson desk/chair to be sold out of SC Johnson hands (for some charity cause awhile back).)

But, on this visit the thing that caught my eye is this Usonian lounge chair from the Winn House. Interestingly, it appears to have been upholstered in one of the Schumacher fabrics. It's my understanding that the Schumacher fabrics were introduced in 1955. Since the chair is dated 1950, obviously this fabric isn't original. There's a note on the signage that attributes the upholstery to a donor (as late as 1985?).
It's a thing of rough beauty up close - subtle geometry & joinery and pleasing proportions. On display, it sits between a dainty Imperial Hotel dining chair and an upright-ish, single-legged Price tower chair, so the Winn chair seems sturdy & muscular & relaxed in comparison. Note the careful orientation of the Schumacher fabric to take advantage of the geometry in its patterning. 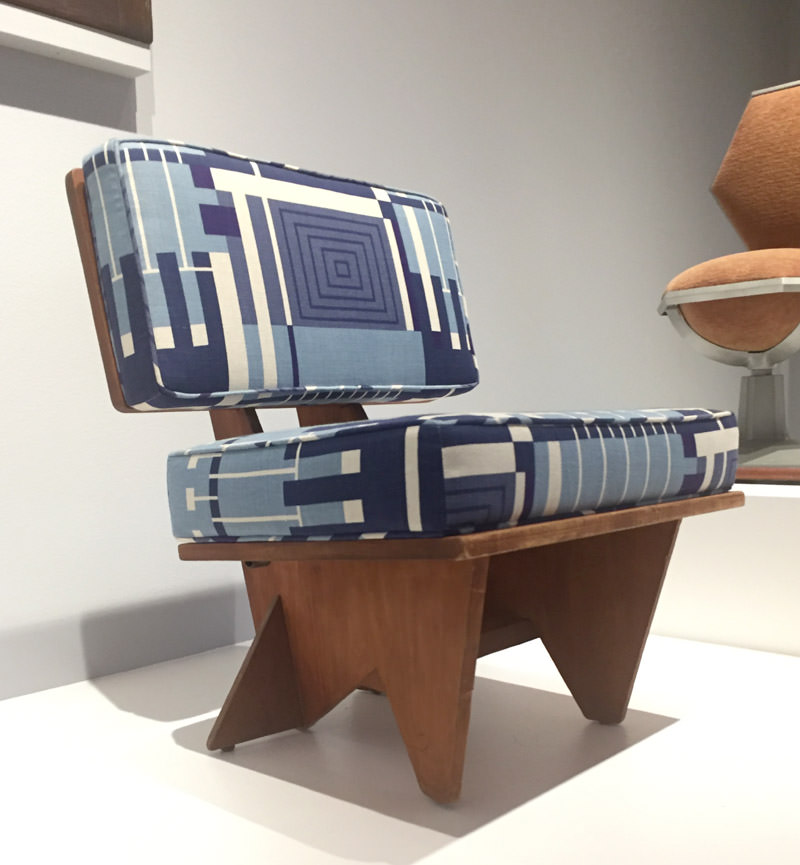 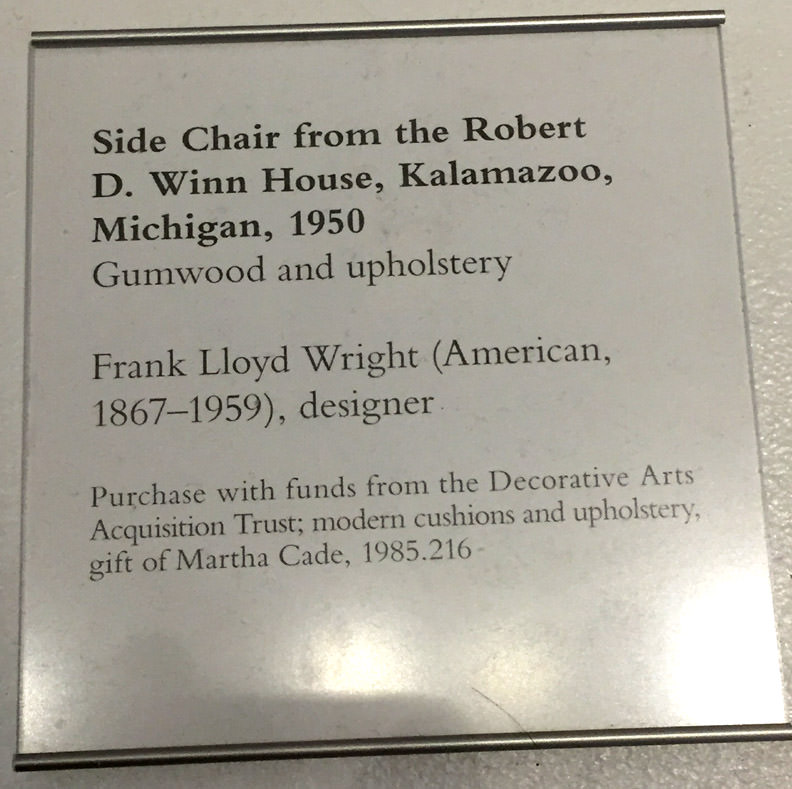 The donation of the Schumacher upholstery is interesting. I Googled "Martha Cade" and garnered this information in her obituary. She was an interesting lady, it seems. Much of her design pedigree seems to concern more historic/traditional subject matter, so it's a little fascinating that she provided this bit of finesse to our Usonian chair: 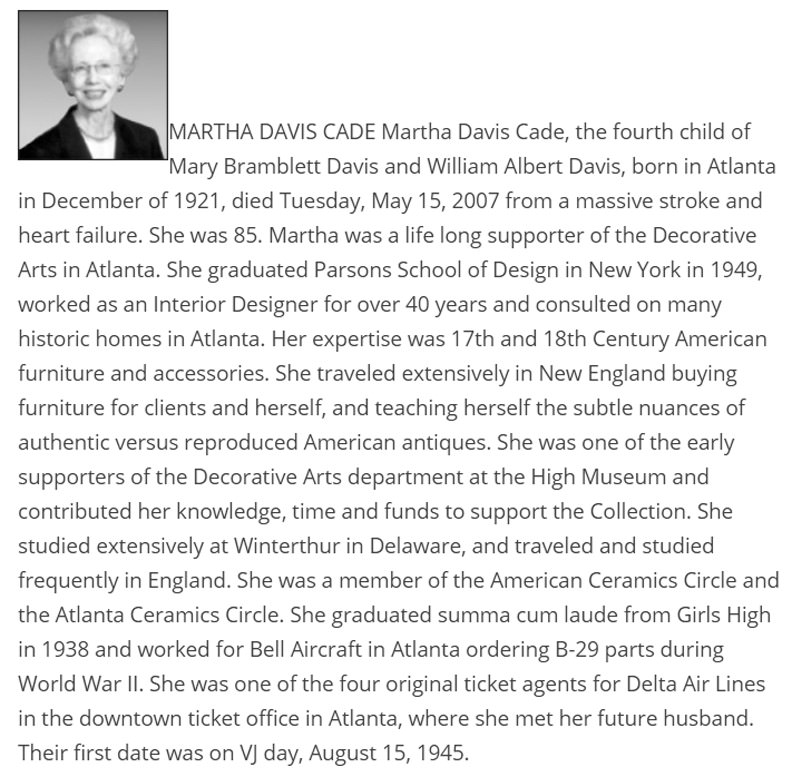