You agree not to post any abusive, obscene, vulgar, slanderous, hateful, threatening, *-oriented or any other material that may violate any applicable laws. Doing so may lead to you being immediately and permanently banned (and your service provider being informed). The IP address of all posts is recorded to aid in enforcing these conditions. You agree that the webmaster, administrator and moderators of this forum have the right to remove, edit, move or close any topic at any time they see fit.
Post Reply
129 posts

Thank you. I hadn't encountered "hikie" until now. It should be remembered that there are any number of bits of regional vocabulary -- and that the spread of these was likely slower pre-Internet, though I have no proof of that.

Having grown up in suburban New York in the 'fifties, it wasn't until 1965 or so, living in eastern Massachusetts, that I first heard "humungous," and "wicked" (meaning "very"). Sometime in the intervening years and decades, one or both of these -- certainly humungous -- spread across the land. I don't have a slang dictionary, so I'm playing by the seat of my pants, here . . .

JChoate wrote:Tom, It's a complicated space, but there are enough nooks & crannies to accommodate furnishings. Here's a doodle where I'd place things if it were my room. In this scenario, neither of the stone-floored window nooks is utilized but would be alternate locations for desk/chair/bed, etc. 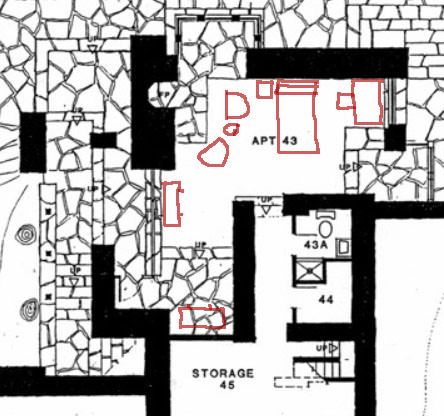 Before you drew that interior arrangement I thought the space was very much smaller.
... would not have thought a bed could have been placed perpendicular to that wall.
Your arrangement is great.
I'd love to see dimensions here.
Top

Yes, that would be helpful. I too saw it as a smaller space, based I guess on exterior appearance. Actually, the sizes of the bathroom fixtures should have provided me with a sense of the space, as those are typically drawn to scale.

Other scale-givers would be exterior step treads (approximately a foot) and perhaps the entry door (30" to 34"). The interior steps leading up to the studio are very narrow. Perhaps each is between 24" and 30" in width.
Of course, just about every time I visit a Wright building it's smaller than I thought it would be, so I could be off.
Top

Hikiee is only in a Hawaiian Pidgin dictionary.

More of a daybed and it is not required to be inset into windows.
No wonder it's use was in the 50s, everything Hawaiian was big then.
I remember fishnets and sea shells draped across the fence. And Tiki bars.
Top

On the previous page SpringGreen wrote:

"Former apprentice, John Oppenheimer, lived there as well & he had his bed where JChoate thought of the seat & desk. We know that because John gave us a drawing of his room on paper. By the time he became an apprentice I think Gene was living up near the Hill Tower because his old apartment was, and is, damp (fixing that one day is another of the long-term hopes)."

Sorry: I'd accidentally written Oppenheimer before, when it's Ottenheimer.
"The building as architecture is born out of the heart of man, permanent consort to the ground, comrade to the trees, true reflection of man in the realm of his own spirit." FLLW, "Two Lectures in Architecture: in the Realm of Ideas".
Top

Those are legit words. The Hawaiians get so much mileage out of so few letters.

SDR, I got the term from 1950s House Beautiful plans drawn by Madeline Thatcher. That's a magazine that was popular back in the days of your youth, published just a few miles south of your hometown. Strange you never encountered it. I doubt anyone growing up in corn-fed Nebrasky or up a West Virginy holler would have heard of it.
Top

Heh. Thanks, Roderick. I guess we're all the beneficiaries, and the victims, of the virtually limitless amount of published data that we might or might not have encountered, in any particular year of our existence ? I know I am . . .

Thanks, Rood. Doesn't Mr Steiner have an amazing collection of Wrightiana ?

I wonder what the Madeline Thatcher drawings looked like. I don't find her online. Was she a designer ? I didn't know anyone who read the so-called shelter magazines, and I would have been so surprised to find Mr Wright among the picket fences, the chintz and the chandeliers.

When I was young the big discovery for me was the Forum and Progressive Architecture. Just as I made do with a gift subscription to Motor Trend, so I eventually had one for the Architectural Record. What led my parents unerringly to the run-of-the-mill, the mediocre, when Road & Track and Architectural Forum would have been so much more . . . better. Well, they read Time, and the Herald Tribune; what could I expect ?

Madeline Thatcher, or "Maddy" as she was called, was an HB employee whose job it was to draw floor plans and perspectives of houses that lay persons could read without difficulty. It was the job I wanted 60 years ago.

The advantage of HB, Home & Garden, House and Home, etc. is that they focused on residential architecture, which was given short shrift by Architectural Record, Architectural Forum and Progressive Architecture (my personal favorite, an evolution of Pencil Points).
Top

Aha. Thanks for that. Only the annual Record Houses issue filled the bill for progressive residential work. My local library has, or had, copies of those magazines, including the Record Houses, going back to the beginning (1956 or '57, maybe ?), where I found a local favorite, Ulrich Franzen's own house in Rye (hidden in the woods not far from Hoffman), in the first or second issue. I tried to find that house recently, on Google aerial and street view. I think it's there, but no longer seen from the street, which has apparently been turned into a private drive.

I came out of school unable to draw architecture presentably. It would have been a dream job, once I taught myself something, to do the work you describe. And it's never too late; if you had something you wanted to submit, here, you could mail a copy to me . . .

What percentage of the houses seen in the shelter magazines you named would have been of interest to our audience here ? As much as half, would you say, or 25 % ? I would have expected less. In any event, I missed out on color pictures of Wright that E Gordon was providing.

Franzen was also featured in the May issues of:

1959 (Weissman House in Rye, NY), an odd modernist box with a 28'-square living/dining room containing a circular walled space for the fireplace, and...

1960 (near *, CT), "an umbrellaed pavilion on a hill" which has a structural method similar to the one you posted.
Top

The Franzen house roof reminds me of a Corbu: https://upload.wikimedia.org/wikipedia/ ... -48-26.JPG

The Beatty house, also in Rye, has a floating flat roof: https://s-media-cache-ak0.pinimg.com/or ... 5fb90d.jpg