You agree not to post any abusive, obscene, vulgar, slanderous, hateful, threatening, *-oriented or any other material that may violate any applicable laws. Doing so may lead to you being immediately and permanently banned (and your service provider being informed). The IP address of all posts is recorded to aid in enforcing these conditions. You agree that the webmaster, administrator and moderators of this forum have the right to remove, edit, move or close any topic at any time they see fit.
Post Reply
92 posts

As I noted earlier, this is consciously symmetrical exercise, unusual in Laurie's work as far as I know. A bilaterally symmetrical envelope -- much less a quadrilaterally symmetrical one -- is going to impose certain limits on the designer. Here, Laurie has chosen to pierce his envelope from the side to provide access. Imagine if he had concluded that the entry could only be on axis -- analogously to the stem of a piece of fruit ? Visitors would have to meet their host in the bathroom !

Plan is not merely formal. The architect thinks about people and their needs, too. It's not just a question of squeezing functions into an interesting form.
Top

Of course not. At the same time, it would equally incorrect to assert that architects have no interest in form-making -- as is amply demonstrated by this house and by virtually every other work we've looked at on this forum. And I hold that a symmetrical building is by itself evidence that its designer had form firmly in mind as he pursued that project. Symmetry, far from being a given (as it so often is in nature), is for the architect a conscious decision, and one worth making certain sacrifices for -- or it would have been abandoned as the requirements of program, site, climate, etc, asserted themselves ?

Surely architecture at its best is the perfect synthesis of form and function, is it not ? Why should we live only with our super-serious Architecture-as-Ideology hat on, when we might be celebrating with joy the beauty and the fitness of a work of architecture, simultaneously ? What's wrong with joy ?

As for symmetry, it is nothing if not natural, in every sense of the word. Living nature abounds with examples, not least the human body. So why should we not have begun with a universal example when seeking to house ourselves ? Thus grew the canon that eventually we modernists did inherit.

When once we allow ourselves to indulge in the "un-natural" free or reflexive form, however, we find that we can improve upon both the function and the aesthetics of built form; those programmatic and other requirements can often be met so much more easily -- more naturally ? -- once we cast off the stricture of bilateral symmetry.

And then, having indulged ourselves with this new freedom, we eventually find ourselves pining for both the purity, the rigor and, yes, the challenge, of working with symmetrical form. And so the cycle completes itself. Thus, I imagine, it might be for a culture and for an individual. A designer may cycle between the two poles once or many times over the course of a lifetime -- or of a year or even a day !

A major component of Wright's genius as a designer-concerned-with-form is that he found many ways of combining symmetry and asymmetry in the same object. In doing so he may have demonstrated, or at the least symbolized, the conflicts between idealized form and the realities inherent in any architectural problem, joyfully and effortlessly (in the vast majority of cases) showing "how it's done" to the rest of us . . .

I have a feeling that this house, when completed, will be thought of much like the Seth Peterson cottage. It will pack a whole lot of architecture per square foot.

Bill- Did Laurie provide some extra storage under the built in bench in the living room?
Top 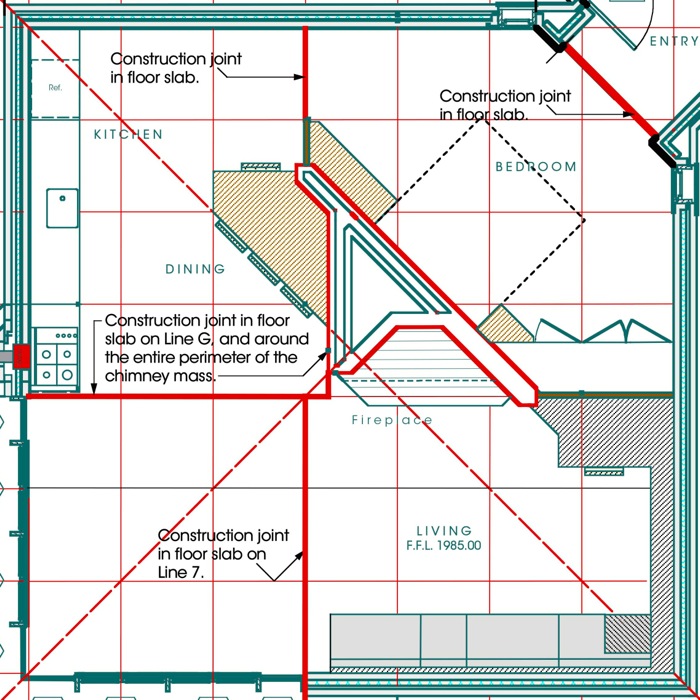 We have a kitchen elevation; the other cabinetry remains obscure so far. I'll be looking forward to explanations of the living-
room millwork: what is the separated rectangle at far lower right; why is this portion of the work colored differently on the plan
from, for instance, the dining table, which is presumably at the same vertical datum as the living-room desk . . .

Two vertical panels are colored in a way that reads green on the drawing. Could these be two pieces of Wright's board-and-
batten partition (or similar) ? A pair of L-shaped lines at the portal (upper right) are colored black; what are these ?

I love the colors Laurie has chosen for these sheets . . .

I recall reading an essay by Joe Price describing why he chose to have Bruce Goff design his studio/house rather than engaging FLW. Price noted that he was certain that Wright would give him a fine work of architecture, but that it would be a miniature full house embodying what Wright thought he should have. Price noted that, at least for him, a house for person living alone does not need to follow the normal conventions of separation and procession, particularly if those that might visit the house are limited to close friends or family. Price believed, rightly so as it turned out, that Goff would give him exactly what he needed and wanted.

I see Bill's "little hut" in a similar light.
Top

I think the configuration of the space might be driven by the site. The view is that way and the cars come this way.
Top

If he had wanted to Laurie could surely have brought the entrance path to the kitchen -- a somewhat more conventional (informal, everyday) ingress to a typical American home. The present layout satisfies aesthetically, both in plan and as experienced on the ground ?

As to site conditions, the mostly blank side walls of the house suggest the presence of neighboring structures. Is that the case, Bill ?

The bedroom entrance isn't all that controversial. Dashed lines indicate that the bed is a Murphy. Modern Murphy beds, upended, fit nicely into the dÃ©cor of the space, making it a perfectly appropriate entrance. The underside of the box spring will be covered by paneling of some sort that will integrate with the adjacent cabinets.

What I find odd is the design of the fireplace with that enormous "flue." The space seems large enough to accommodate HVAC, yet there is no access.
Top

I, too, imagined that the bed swung up to open the room. Modern-day "Murphy-bed" furniture seems to be making a comeback, to judge by local and international advertising.

But no; according to Bill Buck, Laurie's client, the bed is a stationary queen-size (see bottom, page three of the thread). Unexpected -- but there you are ?

Now I see that Bill's message has changed; there is no longer a claim that the bed is stationary. Did someone change his mind ?
Top

The bed is not a Murphy bed.

Laurie wrote to me:

"When one enters a unit of a modest motel, the bed is often visible as soon as the external door is opened. There is often a rudimentary kitchen in the same room. Only the bathroom is secluded. Most take this arrangement for granted."

The precedent of a hotel/motel is a good one, and reveals a bold move on the part of the designer and his client. As uncontroversial as it might be, it is a gesture, which surprisingly, is commonly avoided. Conventions and taboos deserve to be questioned. I can't think of another architect designed house incorporating this procession.

The more I think about it, the more I like it. After all, who doesn't enjoy walking into a well appointed hotel room?

I know a rock musician who enjoyed being on the road so much, that he had his apartment fitted out as an exact replica of a motel. He enjoyed traveling more than being home.
Top

Well -- we have said that upscale American residential taste seems to have been informed by the luxury hotels of the world -- judging by what appears on the pages of "Architectural Digest." So why not the modest motel as model for a humble if exquisite getaway in the South ? The art will lie in the material upgrade and general luxe of a pedigreed organic gem -- and, presumably, the absence of neon on the street and a Coke machine in the passage won't be missed. . .

It appears that there is only one entrance.

If one starts to think of the unusual plan in terms of being a large master suite, it makes much more sense. In a hotel room, typically the first thing one sees is the bathroom, then the bed on one side, the kitchenette on the other, followed by the living area located near the window. This inverted procession is what they chose here. I think it's interesting. It could create the illusion of always being on holiday.
Top
Post Reply
92 posts