You agree not to post any abusive, obscene, vulgar, slanderous, hateful, threatening, *-oriented or any other material that may violate any applicable laws. Doing so may lead to you being immediately and permanently banned (and your service provider being informed). The IP address of all posts is recorded to aid in enforcing these conditions. You agree that the webmaster, administrator and moderators of this forum have the right to remove, edit, move or close any topic at any time they see fit.
Post Reply
47 posts

Thanks, Jim, for posting the information I lacked (I still only possess Monos 5 and 6).

Well, Juliana has what she needs now to build her model. I still wonder what help or advice her teacher provided, as to where she could find the necessary drawings . . .

Juliana, do let us know how your project works out. I wonder if clay or plaster -- even papier machÃ© ? -- might be a useful medium for the stonework, considering the non-orthogonal nature of the forms.

What is Monograph 7?
Did you took these images from a book, right? Could you tell me the name?
Thank you!
Top

The Monographs are a series of 12 volumes published in Tokyo in the 1980s by A.D.A. EDITA. They comprise a catalog of Wright's architectural designs and built work, arranged chronologically. A large city library might be expected to own a set of these books.

You scanned those imagens from Mono 7, am I right?
I copied them, but I wasn't able to read the little letters.
Is there any way you send them in my email, to check if they get better and bigger, or you scan two or three of them again?
No problem if it's not possible.

I'm already building the model. When I make a little more progress I'll post some pictures for you guys see it.

Thank you since then!
Top

I wonder how he went.?

I studied the house back in the 90's after I purchased the Jacobs book from the Taliesin west book store. If I remember correctly I even got to look at the drawings in the Taliesin vault - thanks Bruce for that - was a delight . Those might be at the Avery archive now?

I made a 1:200 scale study model - 120 gm card and balsa wood - Im afraid it was rather fragile and was easy to break if dropped

what fascinated me the most was the structural solution 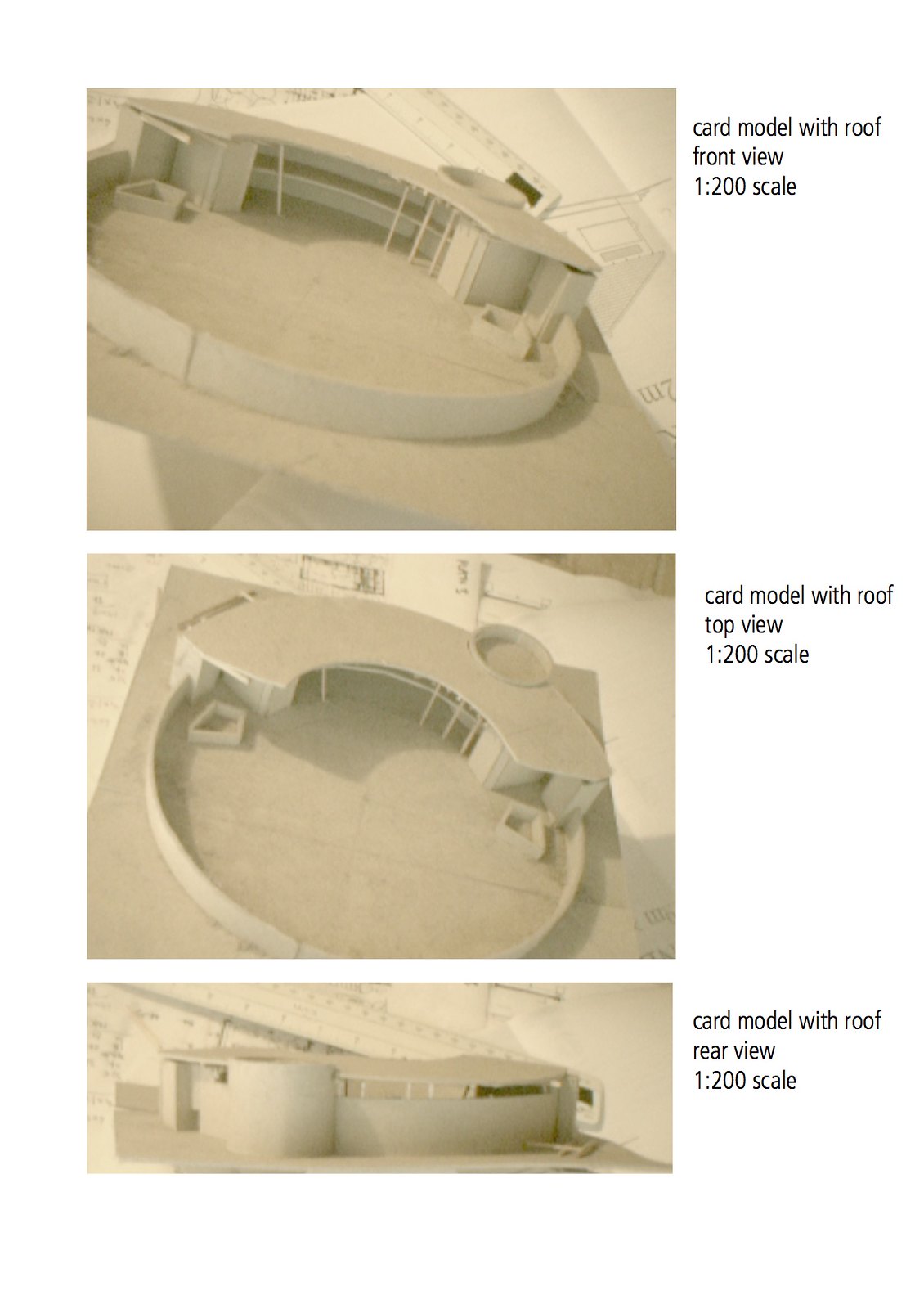 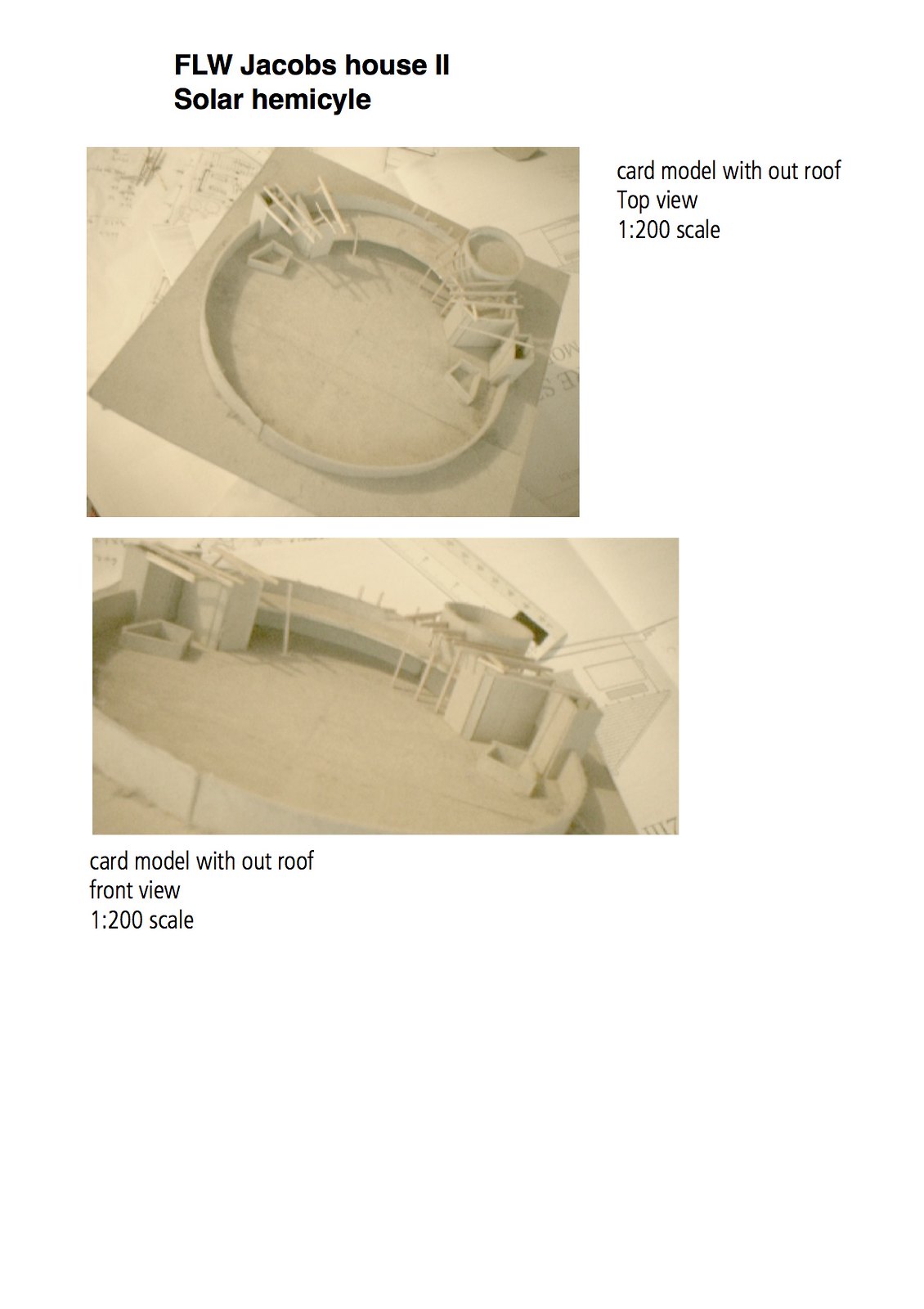 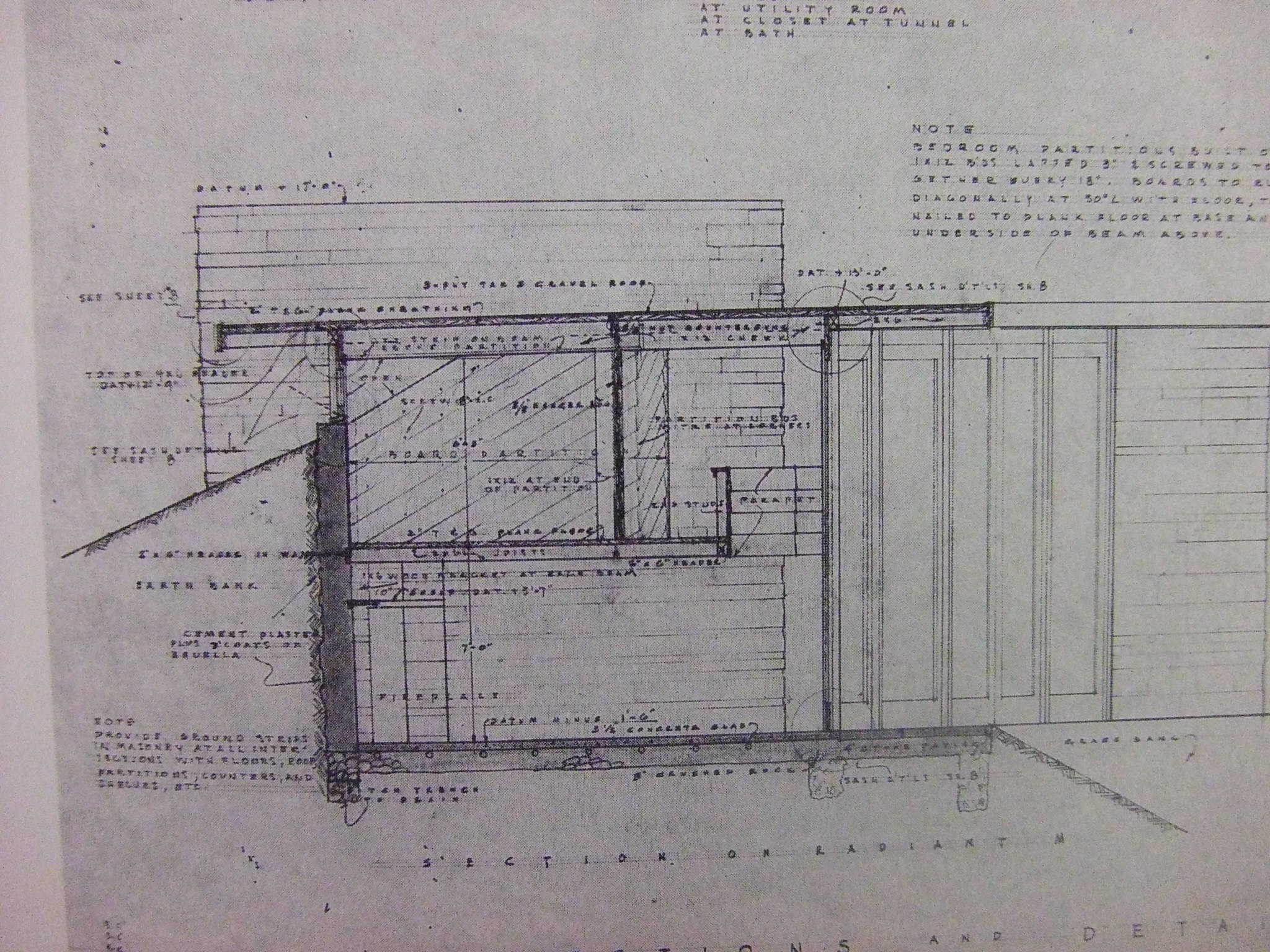 Then using what I garnered from all that, I made a design for a client on their rural property.
This has an outward aspect ( rather than inward) to capture as much winter light as possible - when it rains alot - hence the attached glasshouse.

I think it would have a been a rather nice house, but alas the wife died ( cancer) so they didn't build it.

note this is southern hemisphere, thus sun is to the north 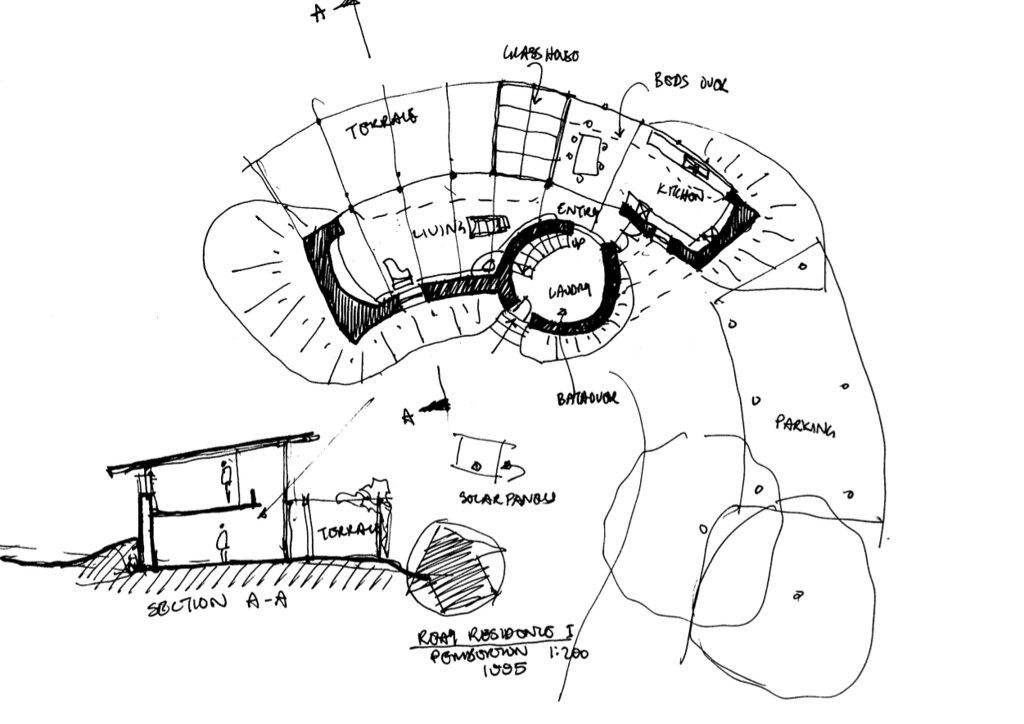 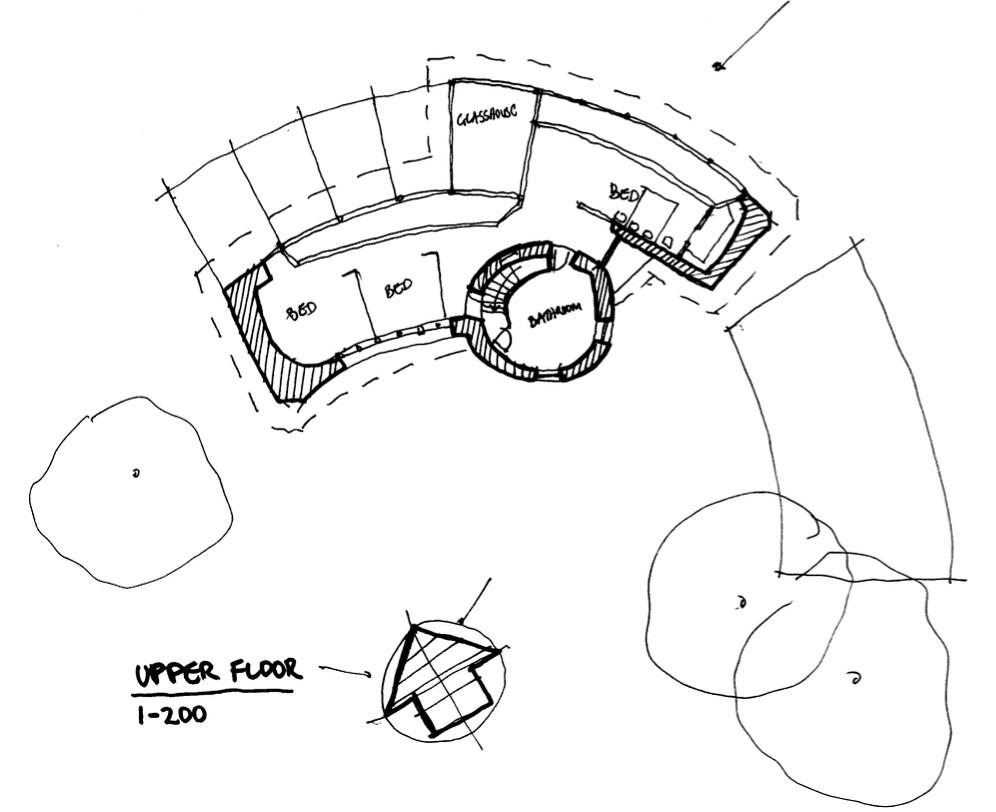 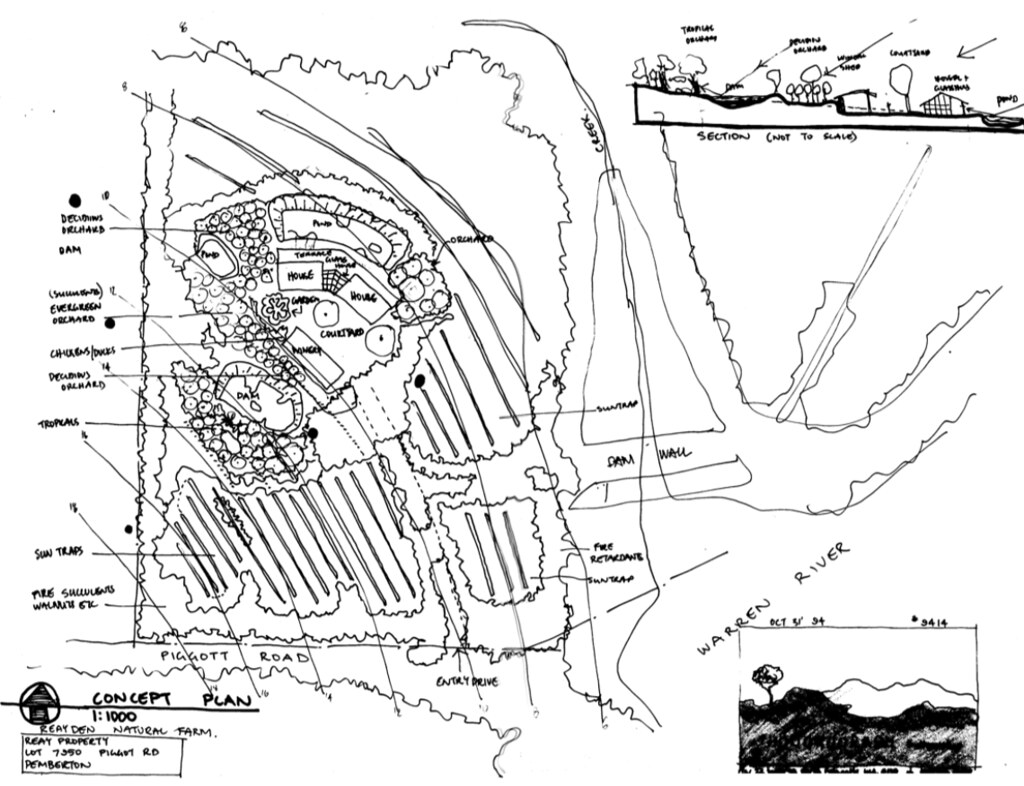 I'm not sure if anyone has explored the differences between the inward (concave) vs. outward (convex) "hemicycle" plans. Wrightians have accepted at face value Wright's concave solution. The differences in both aspect and function would presumably be profound ?

Dictionary definition of hemicycle: "a semicircular shape or structure." Wright's adoption of the term remains one of his less iconoclastic (poetic, vague) choices; compare to "organic," or "usonian."

It varies significantly from south to north (or north to south down under), but the significant difference would be sunrise and sunset for either end of the globe. The closer to either pole, the longer the sun penetrates a convex structure. FLW chose concave to avoid the low-angled, hot afternoon sun coming from the NW in Wisconsin summers.
Last edited by Roderick Grant on Thu Jul 02, 2020 12:33 pm, edited 1 time in total.
Top

I do not find Mr Wright explaining or defending his "solar hemicycle" design in print. It arrived too late for inclusion in the 1941 rewriting of the "Autobiography"; he does not address it in "The Natural House" (1954). Does anyone have a reference ?

In Taschen III, Pfeiffer/Goessel quote the architect's note to the Jacobses regarding his design, but the brief sentences are about the novelty of the design rather than its special qualities. "We are about ready to make you 'the goat' in a fresh enterprise in architecture. If you don't get what is on the boards some other fellow will. So 'Watch out.' It's good. I think we have a real 'first' that you will like a lot."

In his book on the Usonians John Sergeant mentions only "the need to obtain maximum solar heat and protection from northern winds." More interesting are the pages in the Jacobses own book, "Building with Frank Lloyd Wright," on the second house. The clients had cautioned Wright about the cold south-westerly winds they had found on their farm property---and the architect explained to them how he had accommodated the requirement: he spoke of the semi-circular Madison municipal boathouse from 1893, and its provision for defeating the on-shore wind by virtue of its height and the higher ground behind (nothing to do with the semicircular plan shape of the building). He had promised the clients there that they could light their pipes on the deck in front of the building with no trouble, because the wind would be carried over the building, leaving a "ball" of dead air in front. The same effect would be had at the new house, he said---and that's what in fact occurred.

Thinking rationally, the differences between a straight-line plan with an entirely glazed south elevation and a nearly closed north one, and that same plan curled either inward on the south side---the prototypical "solar hemicycle"---or outward, amount to the proportion of glass to square footage of the plan. That is, by stretching the rear wall of the bar and shrinking the glazed front, keeping the area of the plan constant, there is less glass, while shrinking the rear wall and stretching the glass---the reverse of Jacobs II, for instance---increases the amount of glass required to cover the convex wall, by a considerable amount.

Functionally, sunlight entering the house, and moving from east to west over the course of the day, sooner or later floods every room with sun; the difference between each of the examples cited is only the time of day when the east and the west ends of the house are fully lighted. And this can be controlled by where the rooms are placed in the plan: roughly the same effect can be had, assuming one wants maximum daylight in the kitchen in the morning and the living room in the evening, say, by placing the kitchen to the west, in the case of the inward-curved plan, or in the east in the outward-curving version. (The reverse seems to have been the choice of Mr Wright, at Jacobs II; Roderick provides a plausible explanation, above.)

Thus, the main reason for Wright's choice---the inward-curved plan---could have been that it achieves the desired effect with the least amount of glass. What tangible functions would a curved plan accommodate, that a straight-line plan would not ? Does it ask too much to suggest that Jacobs II and (even more, perhaps) the subsequent "hemicycles" are largely if not mainly formal rather than functional novelties---"a real 'first,' " to quote the architect ?

The drawings should be credited to William Allin Storrer.

There is a scale indication in the lower right-hand corner.

If you wish me to provide you with my original scan (approx. 50% larger), please post your e-mail address.

is there only one bathroom in the whole house..?
Top

Yes. The great majority of prewar Usonians---and single-family middle-class American residences in general---were designed and built with one bathroom. 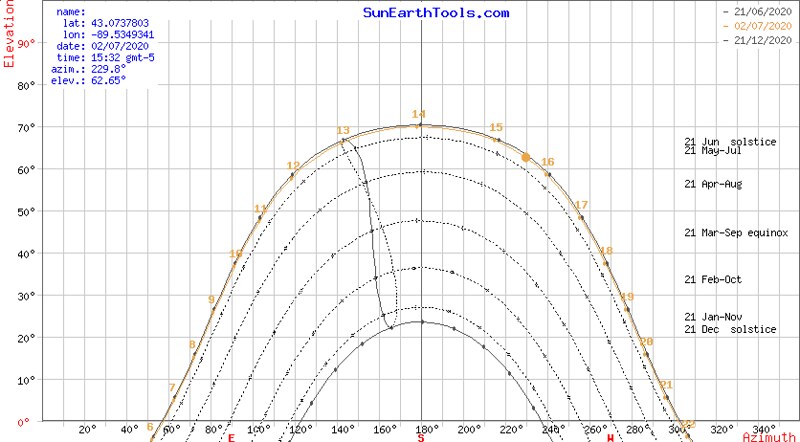 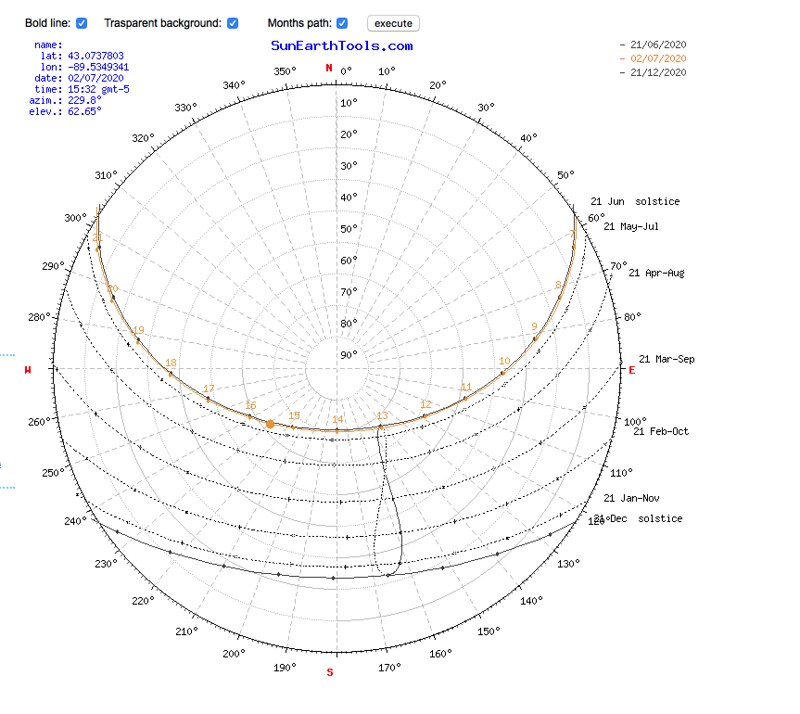 There is also this article at Wisconsin university library archives 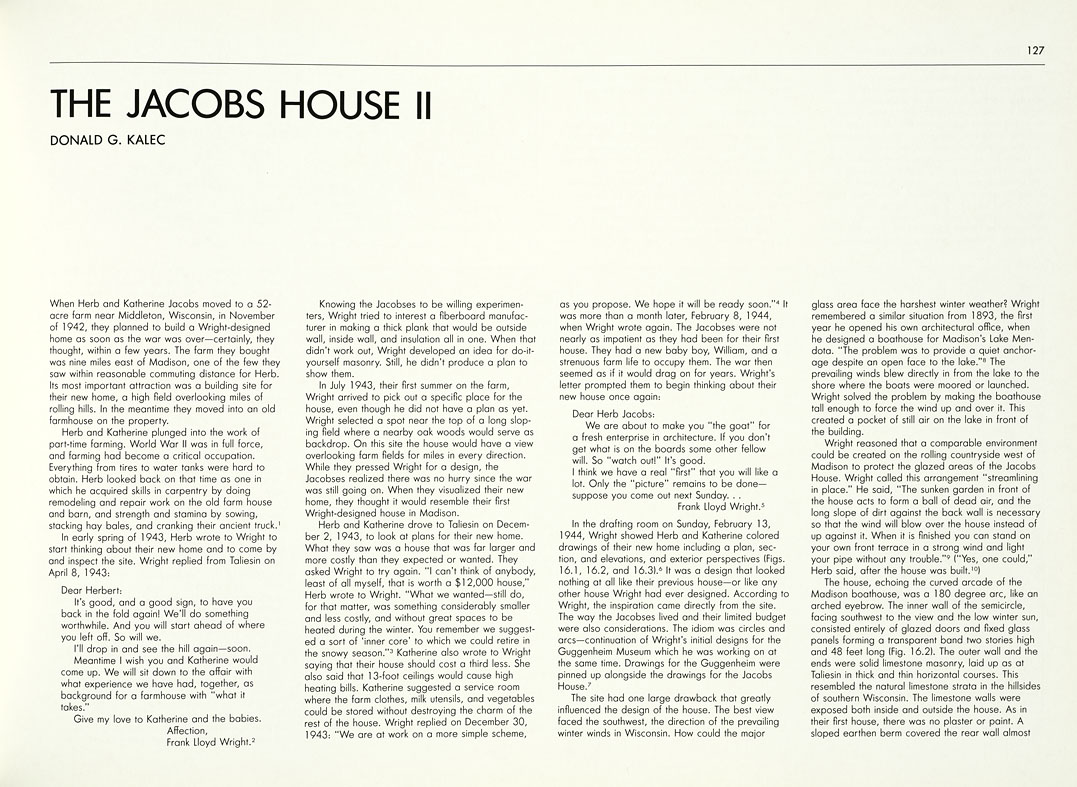 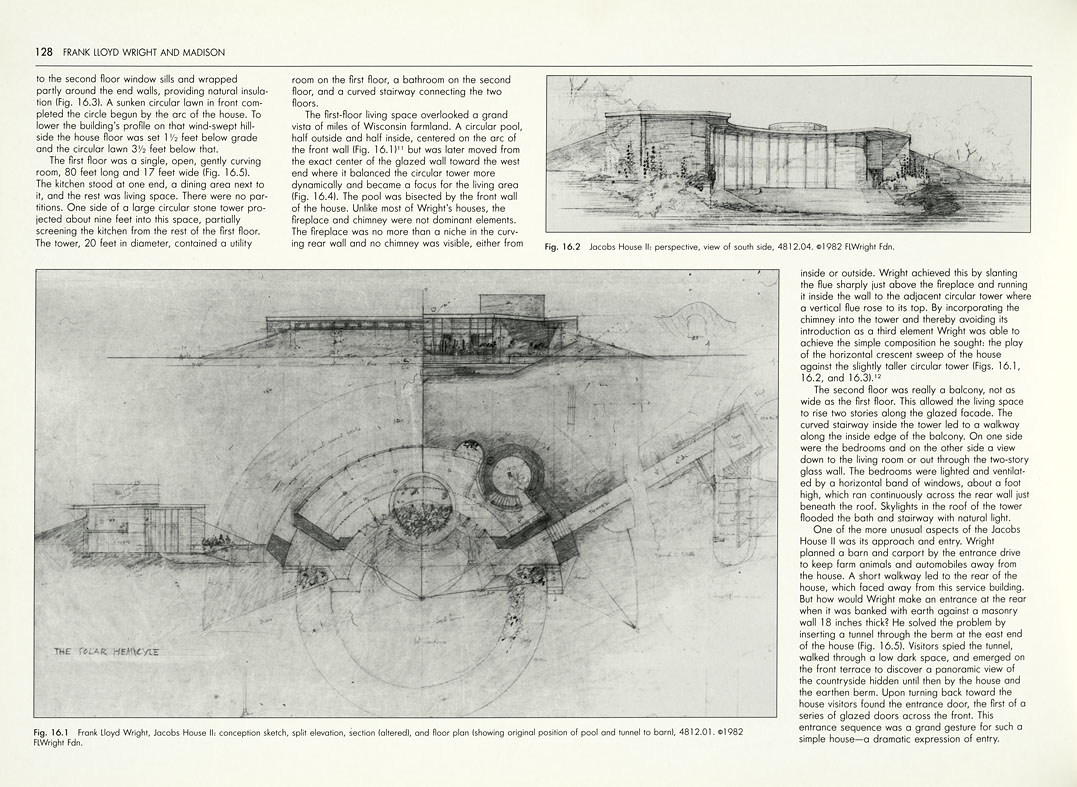 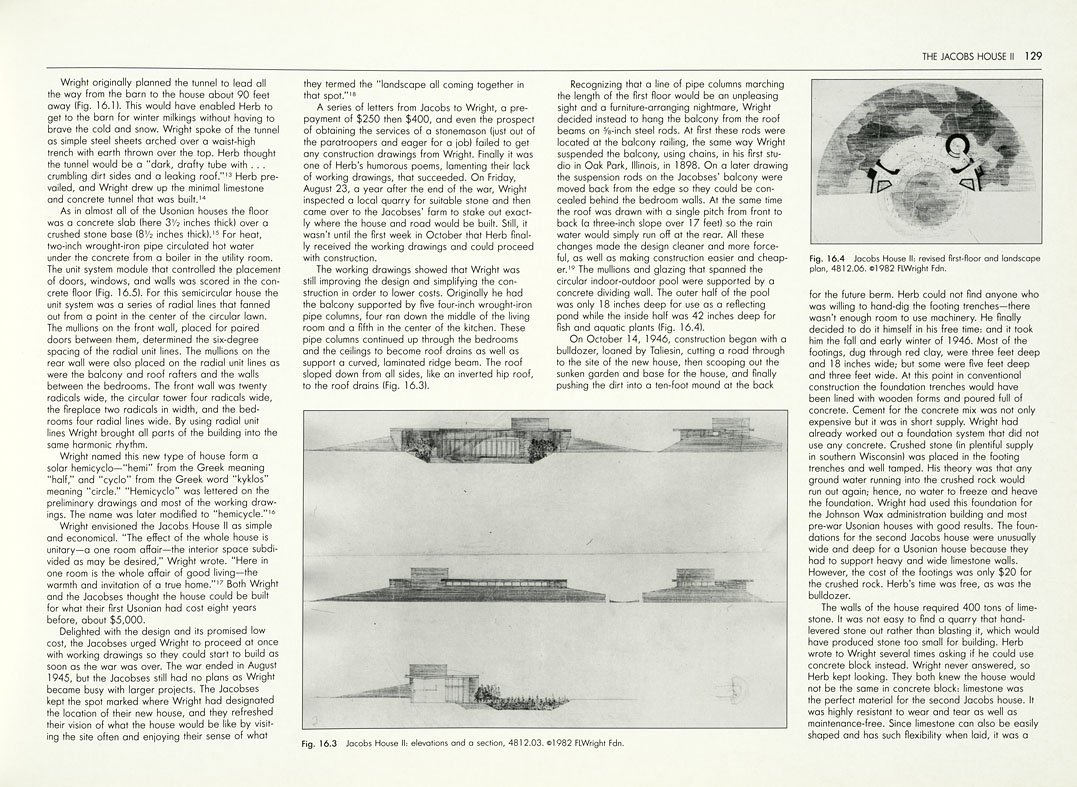 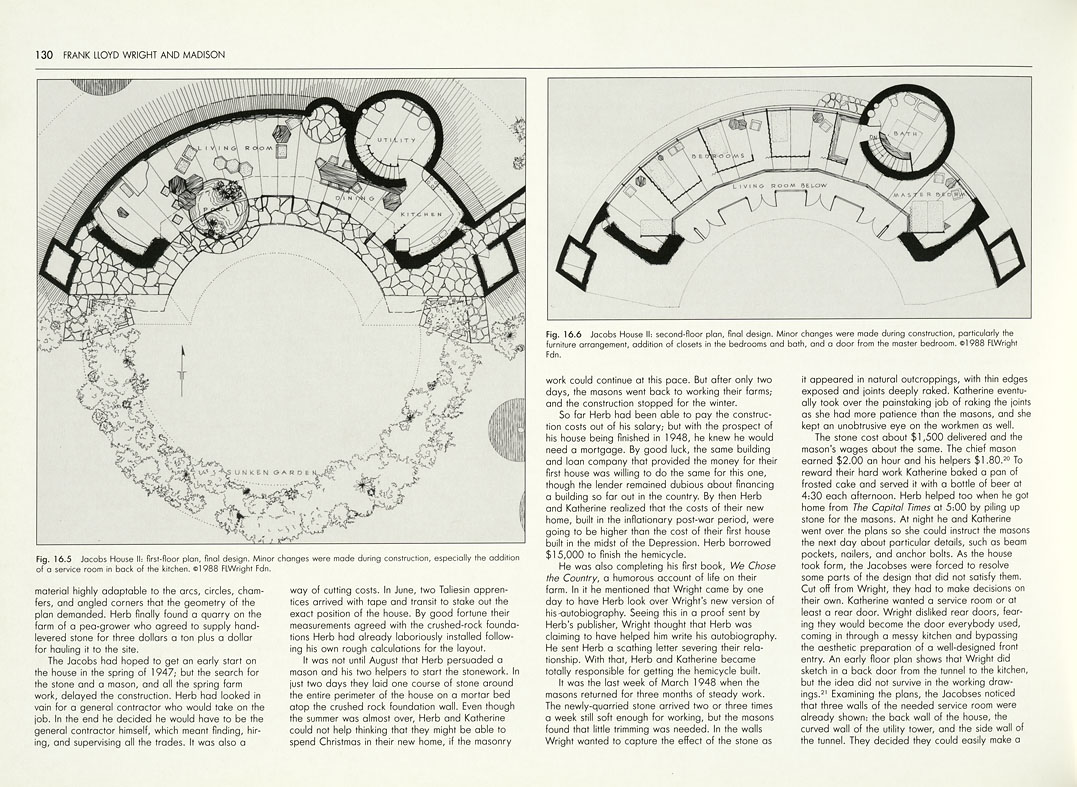 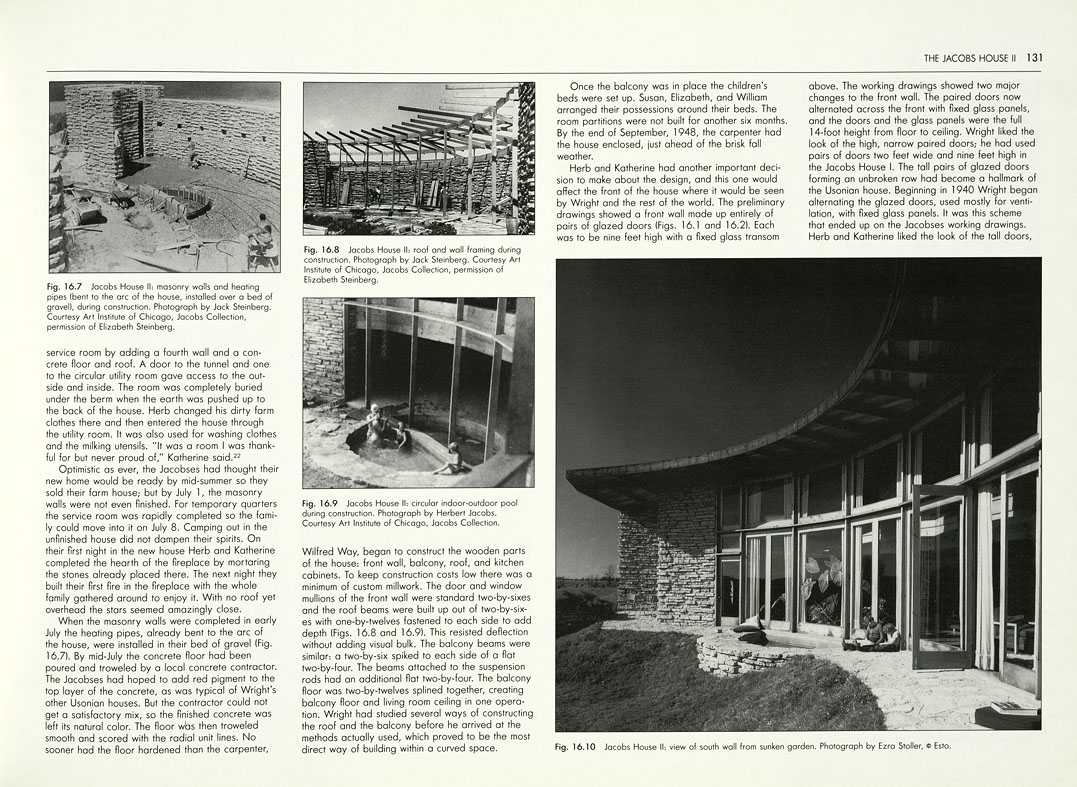 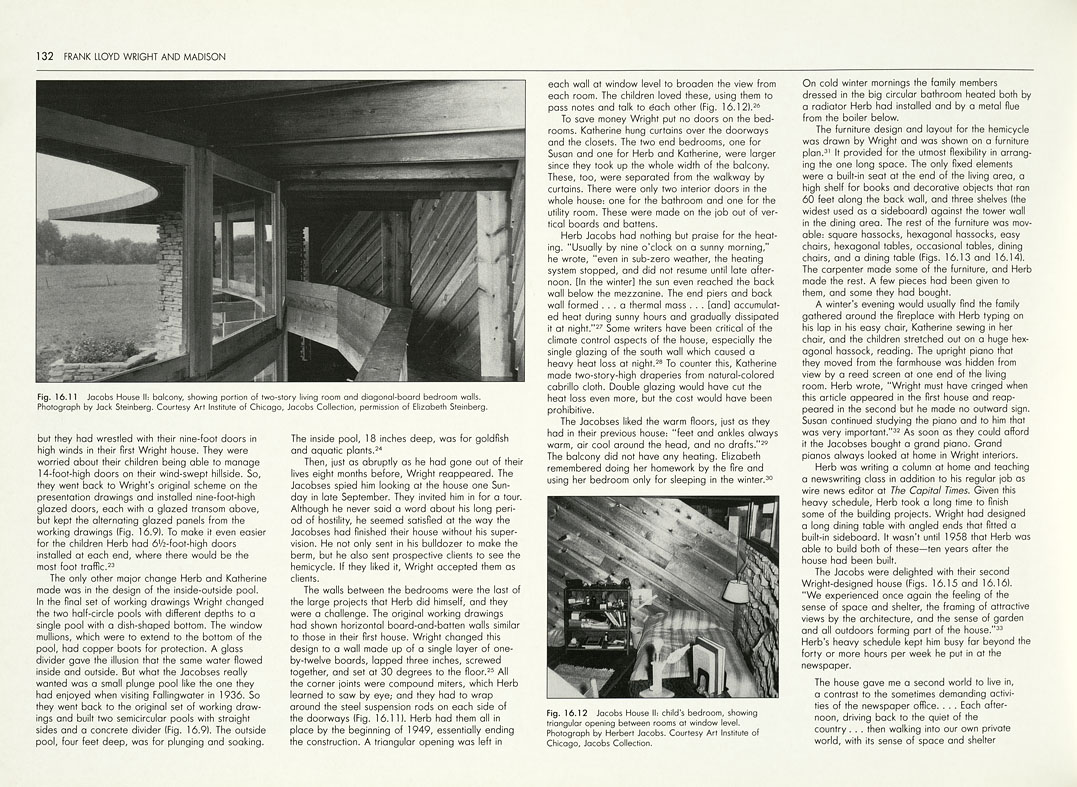 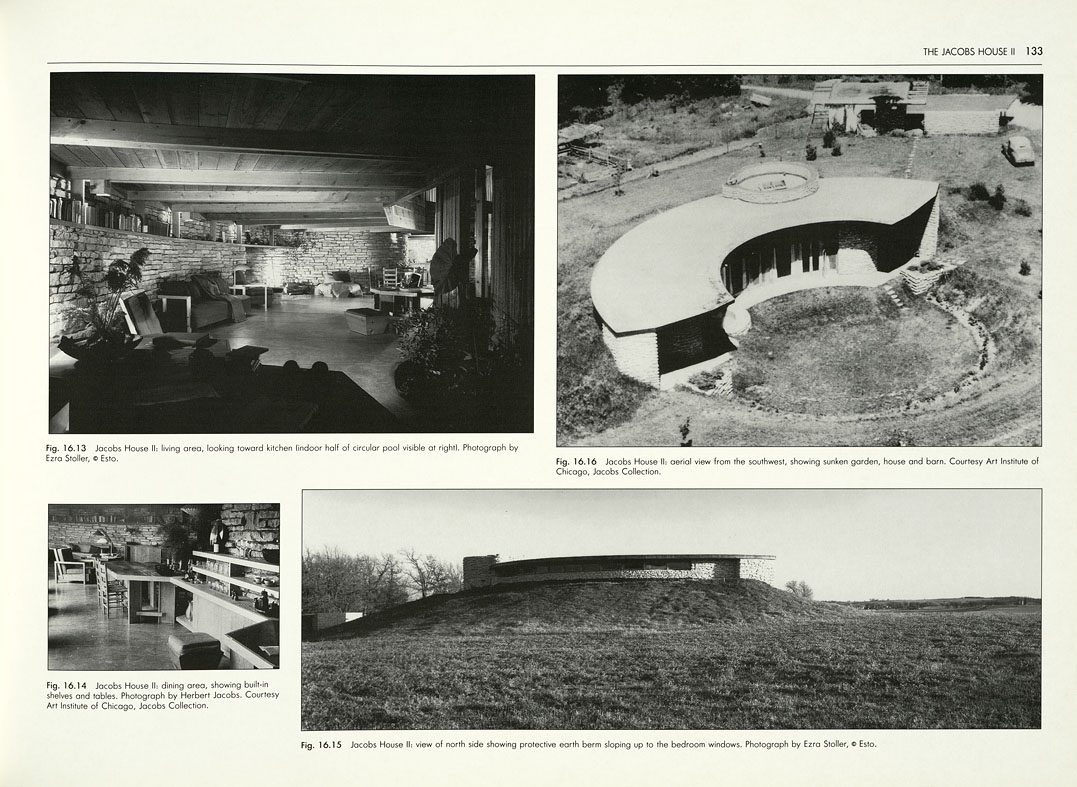 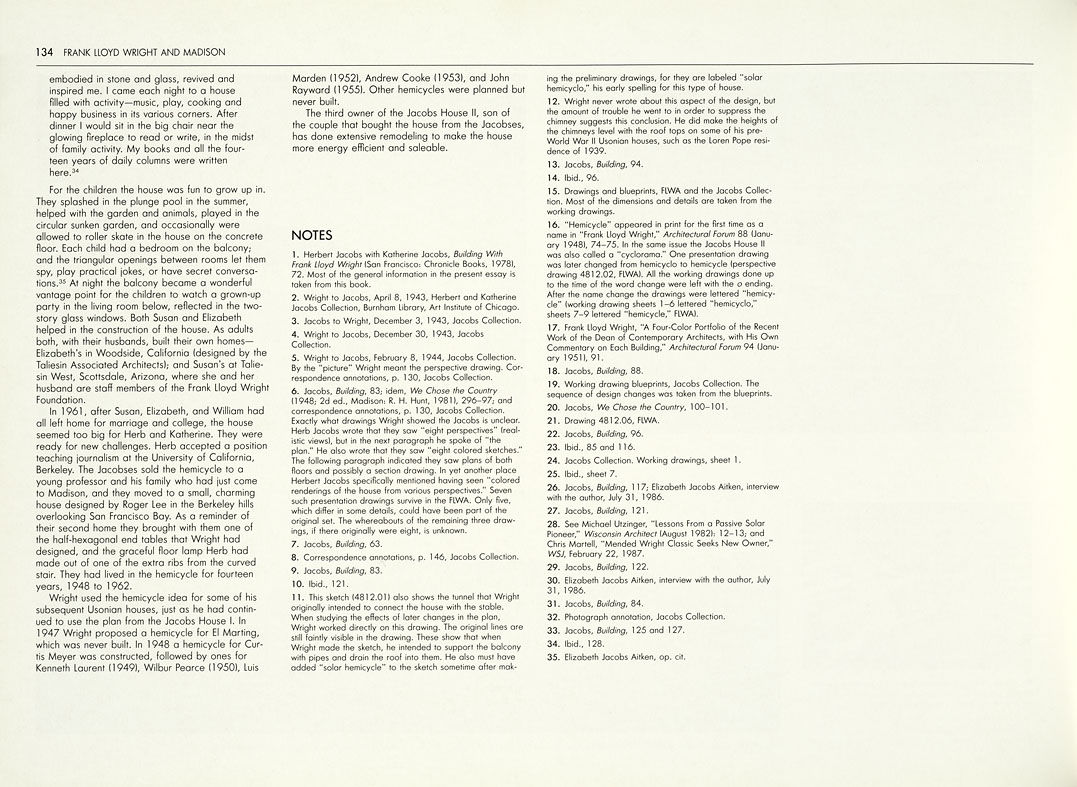 I'll add the remaining construction photos in the Jacobses book.